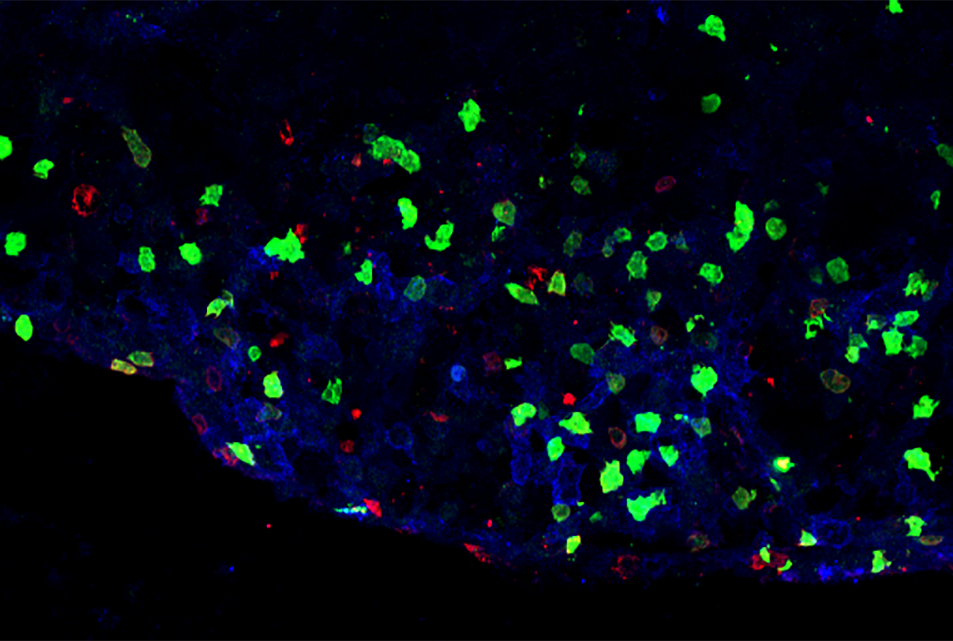 Inflammatory lesion in the spinal cord of a mouse model of multiple sclerosis demonstrating the presence of ILC3 (green) or T cells (red). Image courtesy of Dr. Christopher N. Parkhurst.

A group of immune cells that normally protect against inflammation in the gastrointestinal tract may have the opposite effect in multiple sclerosis (MS) and other brain inflammation-related conditions, according to a new study by Weill Cornell Medicine and NewYork-Presbyterian researchers. The results suggest that countering the activity of these cells could be a new therapeutic approach for such conditions.

The researchers, who reported their finding Dec. 1 in Nature, were studying a set of immune cells called group 3 innate lymphoid cells (ILC3s), which help the immune system tolerate beneficial microbes and suppress inflammation in the intestines and other organs throughout the body. They discovered a unique subset of these ILC3s that circulate in the bloodstream and can infiltrate the brain—and, to their surprise, do not quench inflammation but instead ignite it.

The scientists called this subset inflammatory ILC3s, and found them in the central nervous system of mice with a condition modeling MS. Instead of constraining the immune response, this subset of ILC3s spurred another group of immune cells called T cells to attack myelinated nerve fibers, leading to MS-like disease symptoms. The researchers detected similar inflammatory ILC3s in the peripheral blood and cerebrospinal fluid of MS patients.

“This work has the potential to inform our understanding of, and potential treatments for, a broad variety of conditions involving T-cell infiltration of the brain,” said senior author Dr. Gregory Sonnenberg, associate professor of microbiology and immunology in medicine in the Division of Gastroenterology and Hepatology and a member of the Jill Roberts Institute for Research in Inflammatory Bowel Disease at Weill Cornell Medicine. 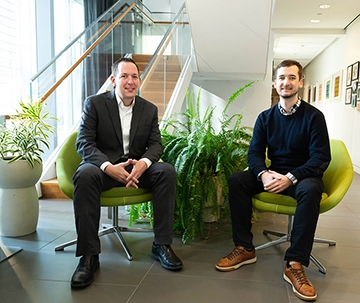 MS affects more than two million people worldwide. Other conditions that feature chronic brain inflammation afflict tens of millions more and include Alzheimer’s and Parkinson’s diseases. There is also evidence that neuroinflammation develops naturally with aging and is a major factor in age-related cognitive decline, and more recently inflammatory T-cell responses in the brain have been linked to neurological symptoms associated with SARS-CoV-2 infection.

The researchers have shown in recent work that ILC3s residing in the gut act as sentinels and immune regulators, suppressing inflammation—including inflammatory T-cell activity—and warding off cancer. In the new study, they examined the roles of ILC3s in the brain, and found, contrary to their expectation, that ILC3s are not normally present in the brain under healthy conditions but can infiltrate the brain from the bloodstream during inflammation. When they do infiltrate the central nervous system, they have pro-inflammatory rather than anti-inflammatory effects.

The researchers showed with a mouse model of MS that these inflammatory ILC3s in the brain function as antigen-presenting cells: They display bits of myelin protein, the main ingredient in the insulating layer around nerve fibers, to T cells—prompting them to attack myelin, causing the nerve damage that gives rise to disease signs. They found the inflammatory ILC3s in close association with T cells in regions of active inflammation and nerve damage in the mouse brains.

“The infiltration of these inflammatory ILC3s to the brains and spinal cords of mice coincides with the onset and peak of disease,” said first author John Benji Grigg, a Weill Cornell Graduate School of Medical Sciences doctoral candidate in the Sonnenberg laboratory. “Further, our experimental data in mice demonstrate these immune cells play a key role in driving the pathogenesis of neuro-inflammation.”

The researchers discovered that they could prevent MS-like disease in the animals by removing from the ILC3s a key molecule called MHCII, which normally is used in the antigen-presenting process—the removal essentially blocks the cells’ ability to activate myelin-attacking T cells. 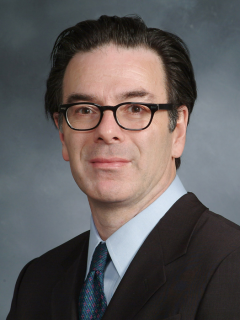 “Despite our very best disease-modifying therapies for MS, patients continue to progress, and since disease onset is early in life, they face the prospect of permanent physical and cognitive disability,” said co-author Dr. Tim Vartanian, professor of neuroscience in the Feil Family Brain and Mind Institute at Weill Cornell Medicine, chief of the division of multiple sclerosis and neuro-immunology and a professor of neurology in the Department of Neurology at Weill Cornell Medicine and NewYork-Presbyterian/Weill Cornell Medical Center. “Identification of inflammatory ILC3s with antigen presentation capabilities in the central nervous system of people with MS offers a new strategic target to prevent nervous system injury.”

Finally, the researchers discovered that ILC3s that reside in other tissues in the body can be programmed, in effect, to counter the activity of brain-infiltrating T cells, preventing the MS-like condition disease in mice.

This work was completed in close collaboration with Dr. Ari Waisman, director of the Institute for Molecular Medicine at the University Medical Center of Johannes Gutenberg University Mainz, where the researchers built on prior research demonstrating that there are gut-resident ILC3s that display antigens to T cells in a slightly different way to promote T-cell inactivity, or “tolerance.” The researchers demonstrated that by experimentally exposing these tolerance-inducing intestinal ILC3s to myelin, they could block neuroinflammatory T-cell activity and the development of MS-like disease in the mice.

The work therefore points to the possibility that MS and potentially many other inflammatory conditions could someday be treated either by directly inhibiting the activity of inflammatory ILC3s that infiltrate the brain, or by targeting self-antigens to the intestinal ILC3s that promote tolerance in other tissues, Dr. Sonnenberg said.