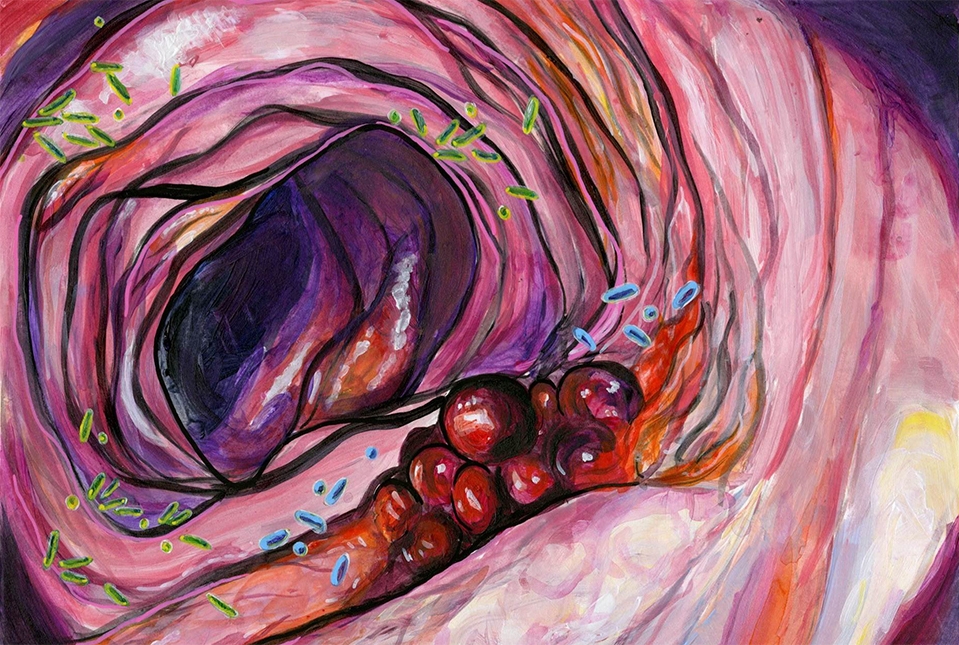 An immune cell subset called innate lymphoid cells (ILC3s) protects against colorectal cancer, in part by helping to maintain a healthy dialogue between the immune system and gut microbes, according to a new study led by researchers at Weill Cornell Medicine and NewYork-Presbyterian. The finding opens the door to new strategies for treating this type of cancer.

The researchers, who published their findings August 17 in Cell, showed that ILC3s tend to be drastically reduced and functionally altered in people with colorectal cancer. Further, they demonstrate that experimentally disrupting the functions of ILC3s in mice leads to aggressive colon cancer and greatly reduces the effectiveness of cancer immunotherapies.

Colorectal cancer is the fourth most common cancer in the United States, with about 150,000 new cases each year and about 50,000 deaths. While early detection of these cancers or precancerous polyps with screening colonoscopies is very effective, treatments for advanced colorectal tumors remain a major challenge with limited therapeutic options. Oncologists are particularly concerned about the relative resistance of these tumors to immunotherapies—treatments that work well against some other cancers by boosting the immune system’s ability to attack malignant cells. 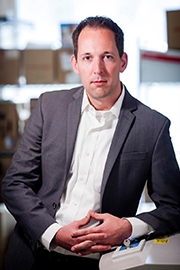 “These findings suggest new possibilities for the clinical approach to colorectal cancer, and also help explain why this type of cancer often fails to respond to immunotherapies,” said senior author Dr. Gregory Sonnenberg, an associate professor of microbiology and immunology in medicine in the Division of Gastroenterology and Hepatology and a member of the Jill Roberts Institute for Research in Inflammatory Bowel Disease at Weill Cornell Medicine.

One factor impacting the resistance to immunotherapies may be the gut microbiome, the population of bacteria and other microbial species that reside in the intestines and normally aid digestion, support various metabolic functions and play a role in regulating the immune system. Colorectal cancer is associated with chronic gut inflammation and a major disruption of the normal microbiome. Further, recent studies suggest that patients’ microbiomes play a key role in controlling the outcome of cancer immunotherapies and may explain why some patients’ cancers do, or do not, respond well to treatment.

In the new study, Dr. Sonnenberg and colleagues, including lead author Dr. Jeremy Goc, a research associate in Dr. Sonnenberg’s laboratory, examined the role of ILC3s, which reside in the intestines and are known to help mediate the relationship between the immune system and gut microbes.

Group 3 innate lymphoid cells normally play a key role in maintaining a healthy dialogue between the microbiome and the immune environment in the lower gut. In close collaboration with Dr. Manish Shah, the Bartlett Family Professor of Gastrointestinal Oncology, director of the Gastrointestinal Oncology Program in the Division of Hematology and Medical Oncology, and member of the Sandra and Edward Meyer Cancer Center at Weill Cornell Medicine, the research group analyzed colorectal tumors and pre-cancerous polyps from humans and mice. They found that ILC3s from cancerous tissues were relatively depleted as compared with healthy tissues and were further fundamentally altered in their functions.

“This is an exciting finding that could have broad implications for our understanding of the pathways that control the pathogenesis, progression and therapeutic responsiveness of gastrointestinal malignancies,” said study co-author Dr. Shah, who is also chief of the Solid Tumor Oncology Service and co-director of the Center for Advanced Digestive Care at NewYork-Presbyterian/Weill Cornell Medical Center.

Among this loss of normal ILC3 activity in the gut, the authors further observed that the ability of ILC3s to regulate a specific immune cell subset called T cells was significantly disrupted. This disruption of the dialogue between ILC3s and T cells further led to a rise in inflammation in the gut that subsequently modifies the gut microbiome. These gut microbe changes in turn induce a decrease in the levels of T cells that are good at fighting tumors. 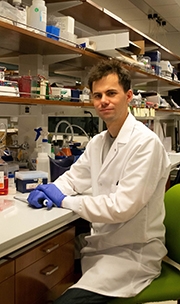 Those collective outcomes have major consequences on tumor development, the researchers showed. In mice that develop colon cancers, blocking ILC3 signaling led to the growth of abnormally invasive and more aggressive tumors with poor outcome. And when colon tumors were implanted in mice with blocked ILC3 signaling, the tumors were relatively unresponsive to a cancer immunotherapy called anti-PD-1 checkpoint blockade—whereas the same kind of tumor, implanted in mice with normal ILC3 signaling, responded well to the therapy.

“Better understanding the contribution of the microbiome to cancer development and treatment responsiveness could revolutionize patient management strategies. This study illuminates a mechanism of therapy resistance driven by dysregulation of the microbiome that has been unappreciated until now,” Dr. Goc said. “It suggests, for example, that one day we could sample gut microbiota to predict tumor progression and responsiveness to immunotherapy—and even use healthy microbiota to improve treatment responsiveness.”

The researchers are now working to identify the species of gut bacteria that are most beneficial in this regard. This research is supported in part by a novel funding mechanism from the Cancer Research Institute that was granted to Dr. Sonnenberg in 2019, the inaugural year of the program.

Research in the Sonnenberg Laboratory is also supported by the National Institutes of Health (R01AI143842, R01AI123368, R01AI145989, U01AI095608, R21CA249274 and R01AI162936), an Investigators in the Pathogenesis of Infectious Disease Award from the Burroughs Wellcome Fund, a Wade F.B. Thompson/Cancer Research Institute (CRI) CLIP Investigator grant, a CRI Lloyd J. Old STAR Award, the Meyer Cancer Center Collaborative Research Initiative, The Dalton Family Foundation, and Linda and Glenn Greenberg. Jeremy Goc is supported by fellowships from the Crohn’s and Colitis Foundation (519428) and the Philippe Foundation. Greg Sonnenberg is a CRI Lloyd J. Old STAR. Gregory F. Sonnenberg was previously on a scientific advisory board and owned stock in Celsius Therapeutics Inc within the past 12 months.