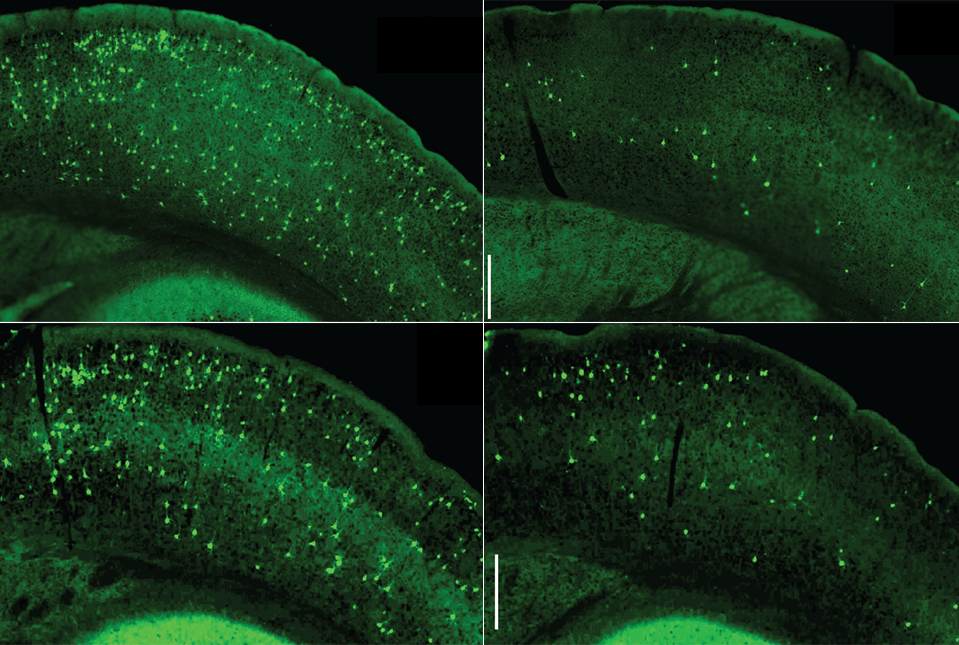 Inhibiting an important signaling pathway in brain-resident immune cells may calm brain inflammation and thereby slow the disease process in Alzheimer’s and some other neurodegenerative diseases, suggests a study by Weill Cornell Medicine investigators. The findings point to the possibility of new therapeutic strategies against neurodegenerative diseases, which are relatively common in older adults and so far have no effective, disease-modifying treatments.

Brain inflammation, especially via the activation of immune cells in the brain called microglia, has long been noted as a common feature of neurodegenerative diseases. The spread of abnormal, thread-like aggregates—“tangles”—of a neuronal protein called tau is another frequent feature of these disorders.

In the study, which appeared April 12 in Nature Communications, the researchers showed that the tau tangles help trigger the inflammatory activation of microglia, via a multifunctional signaling pathway called the NF-κB pathway. Inhibiting microglial NF-κB signaling in a tau-based Alzheimer’s mouse model largely pulled the immune cells out of their inflammatory state and reversed the animals’ learning and memory problems.

“Our findings suggest restraining overactive NF-κB may be a good therapeutic strategy in Alzheimer’s and other tau-mediated neurodegenerative diseases,” said senior author Dr. Li Gan, director of the Helen and Robert Appel Alzheimer’s Disease Research Institute and the Burton P. and the Judith B. Resnick Distinguished Professor in Neurodegenerative Diseases in the Feil Family Brain and Mind Research Institute at Weill Cornell Medicine.

Tau tangles are found inside neurons in affected brain areas in Alzheimer’s, Parkinson’s, Pick disease, progressive supranuclear palsy, frontotemporal dementia and other neurodegenerative diseases. Experiments have shown that tangles, when injected into animal brains, can seed the formation of new tangles, creating a chain-reaction in which the tangles spread to other brain regions. Autopsy studies in Alzheimer’s and other “tauopathies” indicate that this spread of tangles often tracks closely the progress of disease.

The tangles’ precise role in harming brain cells has never been fully understood. However, prior studies have suggested that tau tangles can interact with microglia, in a way that drives the microglia into an inflammatory, disease-associated state. In this inflamed state, the microglia, which normally try to consume the tau tangles, become relatively inefficient at doing so. Much of the tau ends up being not digested but, rather, disgorged from the microglia, in forms that tend to seed new tangles.

In the new study, Dr. Gan and her team found evidence from cell culture and mouse experiments that tau tangles push microglia into this disease-linked inflammatory state mainly by activating the NF-κB signaling pathway within them. In a Alzheimer’s mouse model with tau-tangle mainly driven by seeded tau, they showed that keeping the NF-κB pathway overactive in microglia enhanced the seeding and spread of tangles, which propel further NF-κB activation. By contrast, shutting off NF-κB blocked this vicious cycle, and markedly lessened the spread of the tangles.

In another tau mouse model, with tau tangle formed in aged neurons, the researchers showed that the inactivation of microglial NF-κB shifted the microglia almost entirely out of their inflammatory, disease-associated state, restoring a much more normal cell appearance and pattern of gene activity. This shift, which suppresses microglia from disgorging toxic tau seeds, strikingly, prevented key cognitive/memory deficits the mice normally develop in this model.

Over the past two decades, many experimental Alzheimer’s treatments have aimed to slow or stop the disease process by targeting amyloid plaques and more recently tau tangles. So far, all these efforts have failed in large-scale clinical trials. The new findings suggest that future drugs taming overactive microglial NF-κB signaling might fare better, Dr. Gan said.

Her lab is now following up with further research to detail more precisely how microglial NF-κB signaling, which affects the activities of at least hundreds of other microglial genes, impairs neurons and leads to cognitive and memory deficits. The researchers will investigate how to restrain specific aspects of overactive NF-κB signaling without affecting the normal function of brain’s immune cells.

Many Weill Cornell Medicine physicians and scientists maintain relationships and collaborate with external organizations to foster scientific innovation and provide expert guidance. The institution makes these disclosures public to ensure transparency. For this information, see profile for Dr. Li Gan.