Salt Sense: Scientists at the Feil Family Brain and Mind Research Institute Investigate the Link Between a High-Sodium Diet and Dementia 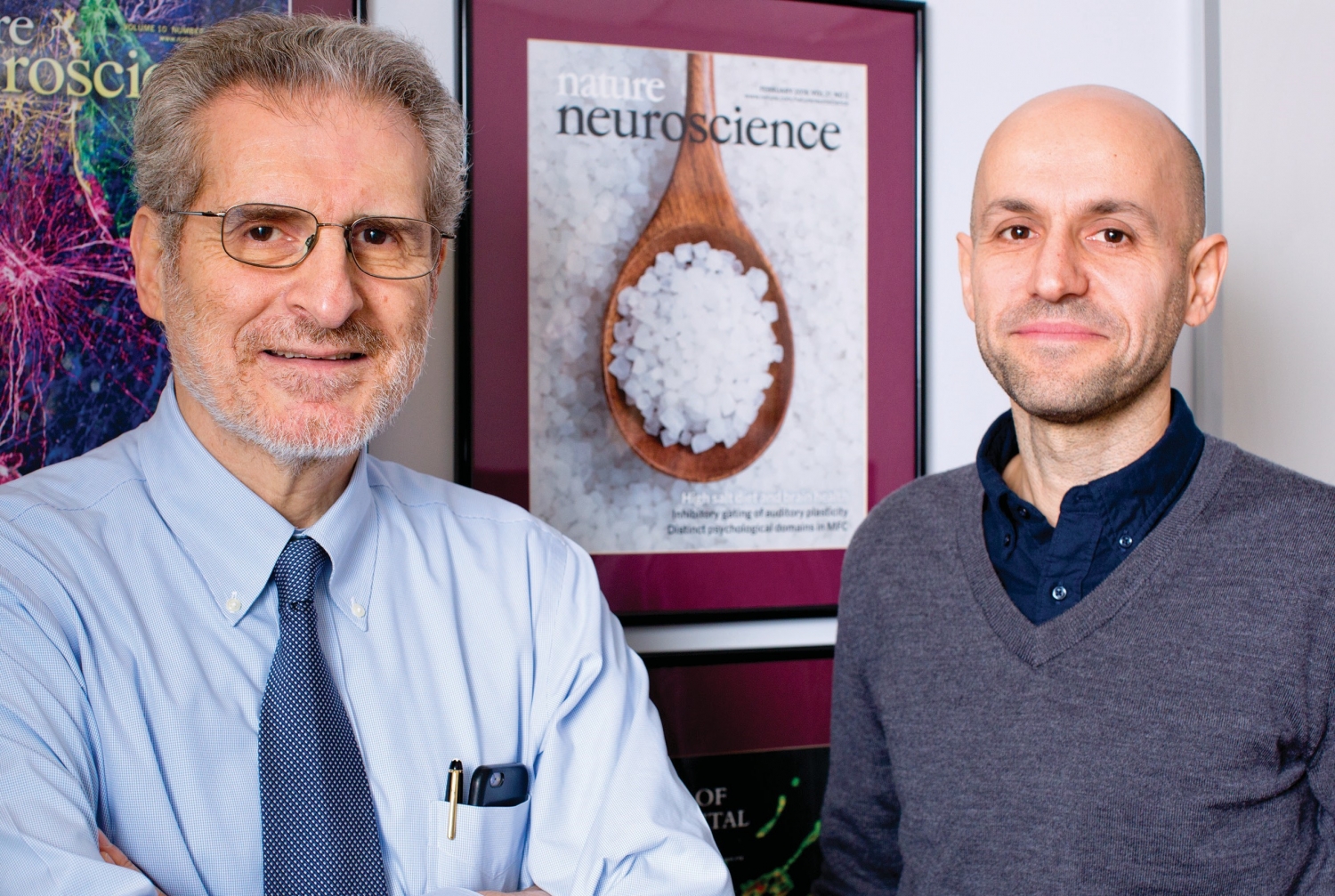 On its face, the logic seems straightforward. Eating too much salt can lead to high blood pressure; numerous studies have shown that having hypertension in midlife makes it more likely that you’ll develop certain forms of dementia, including Alzheimer’s disease, in later years. Therefore, overly high sodium intake puts some people at risk of future cognitive impairment.

According to work by investigators in the Feil Family Brain and Mind Research Institute (BMRI) at Weill Cornell Medicine, that last statement is essentially true—but the issue is much more complex and nuanced than it might seem. In a study published in Nature in fall 2019, lead author Dr. Giuseppe Faraco, assistant professor of neuroscience, and colleagues explored how excessive salt consumption negatively impacts cognitive function. And according to their findings, that damage occurs independently of any increase in blood pressure—potentially offering other targets in the battle against dementia, an ever-rising concern as the population ages.

Working in a mouse model, the team found that consuming high levels of sodium causes a deficiency of the compound nitric oxide, which is vital in maintaining the brain’s vascular health. Low nitric oxide levels destabilize the tau protein, whose accumulation in the brain is a hallmark of Alzheimer’s disease. “If we block tau by injecting the mice with anti-tau antibodies, or in mice who have no tau [due to genetic engineering for experimental purposes], a high-salt diet is not able to induce cognitive impairment,” explains Dr. Faraco, also a Finbar and Marianne Kenny Research Scholar in Neurology. “And this is interesting, because in the same mice we see that there is cerebrovascular dysfunction—the vessels of the brain don’t work properly. But despite this, because these mice don’t have tau or tau is blocked, there is no cognitive impairment. So there are other mechanisms involved.” 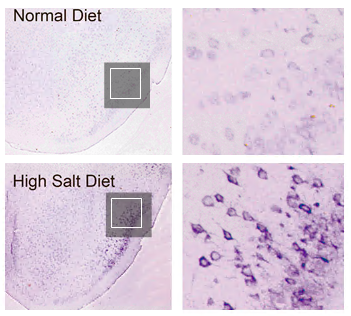 Food For Thought :Tau phosphorylation (depicted in purple), a pathological hallmark of Alzheimer’s disease, as seen in the brains of mice fed a normal diet (top row) and one high in sodium. The square areas within the images on the left are magnified in the right-hand images.

The research follows up on work the team published in Nature Neuroscience in 2018, which established that a high-salt diet causes dementia in mice—evidenced by the fact that the rodents couldn’t complete routine tasks like building their nests and had trouble with tests of memory, such as recognizing objects they’d seen before. The researchers determined that the high sodium consumption caused cells in the gut to release the molecule interleukin-17 (IL-17), which then entered the bloodstream and prevented cells in the walls of the brain’s blood vessels (known as endothelial cells) from producing nitric oxide, restricting blood flow. But that restriction, they realized, wasn’t severe enough to impair neurological function—prompting them to dig deeper and to tease out the relationship to tau.

Dr. Costantino Iadecola, director of the Feil Family BMRI and the Anne Parrish Titzell Professor of Neurology, was senior author on the two studies. As he notes, the findings are important for multiple reasons. “It links something that you eat, a dietary factor—which is used and abused extensively throughout the world—to the signature of a neurodegenerative disease, which is the tau accumulation,” he says. “So having a link between salt and a dementing condition that is pervasive and increasing in impact is very, very important. It doesn’t mean salt causes Alzheimer’s disease, but it certainly provides a biological possibility that if you eat too much you may get an increased likelihood of developing it.”

Additionally, Iadecola says, the work underscores the role that overall brain health plays in staving off cognitive impairment—something that he and Weill Cornell Medicine colleagues have been at the forefront of exploring for more than a decade. “It’s important as a conceptual idea, that when you have a disease like Alzheimer’s, it’s not just the neurons—the king of the brain, the main cell—that are important,” says Dr. Iadecola, who was also senior author on a study, published in Nature Neuroscience in August 2020, that demonstrated that tau on its own can cause dysfunction of blood vessels in the brain, even without salt as a complicating factor. “It’s also the support cells that provide all the necessary nutrients and growth factors and help maintain the balance between the different molecules and biochemicals in the brain.”

Ultimately, Dr. Iadecola says, it will be essential to establish whether the findings in mice are also true in humans. But given that the neurological effects of a high-salt diet may not manifest themselves until decades after that sodium was overconsumed, such work would likely entail long-term, longitudinal population studies. “Over time,” he says, “you’re going to get an answer.” In the meantime, though, the team’s findings open up potential targets for future treatments, including drugs to increase the ability of endothelial cells to make nitric oxide or to target the immune response in the gut that leads to the release of IL-17. “If we can reduce salt intake to the appropriate levels for each individual, are we going to eliminate the problem of dementia? The answer is no,” Dr. Iadecola observes. “This is just one piece of the puzzle; other elements include exercise, genetics, and your levels of intellectual engagement and social interaction. It’s a mosaic of different factors, and any strategy to reduce the risk worldwide has to be multidisciplinary and multipronged.”

According to the Centers for Disease Control and Prevention, Americans should consume less than 2,300 milligrams of sodium per day—but the vast majority of us eat far more than we should, for an average of more than 3,400 milligrams daily. (More than 70% of that intake comes not from the salt you sprinkle on your plate, but from processed food and restaurant meals.) And as Dr. Faraco notes, even as researchers further explore the link between salt and dementia, there’s no downside—and plenty of advantages, like lowering your risk of hypertension, heart disease and stroke—to keeping your sodium intake within recommended guidelines. “That is a good practice independent of these papers,” he says. “A diet reduced in salt consumption is good for your health.”

Dr. Iadecola serves on the advisory board of Broadview Ventures.