Racing Toward a Cure for Alzheimer’s Disease 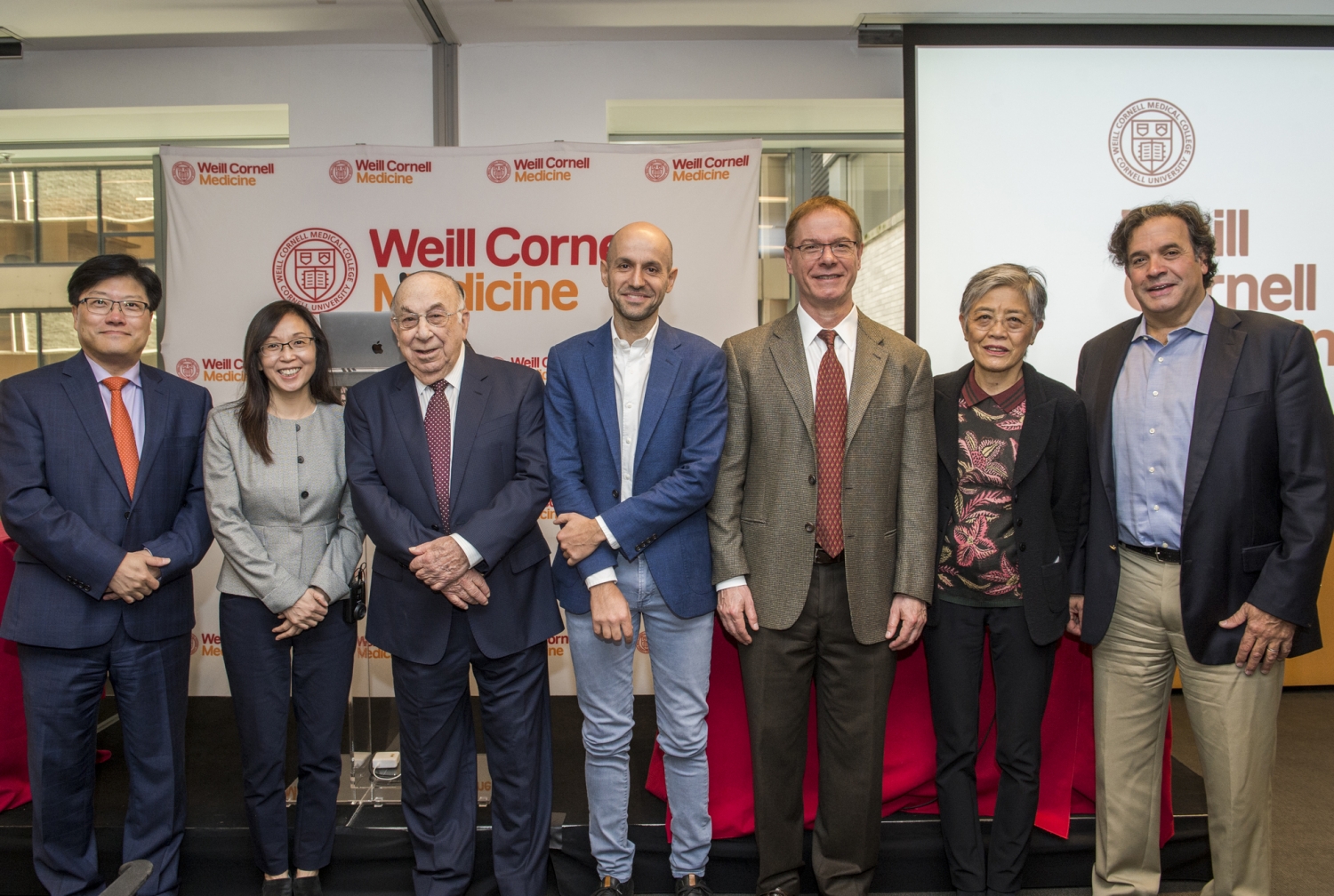 In the roughly 100 years since Alois Alzheimer first described the devastating neurodegenerative disease that now bears his name, scientists have developed an increasingly sophisticated understanding of the brain. Yet as incidence of the disease continues to rise in an aging population, effective treatments for Alzheimer’s disease remain elusive.

Leading experts in neurodegenerative disease gathered on Oct. 4 at the seventh annual Helen and Robert Appel Alzheimer’s Disease Research Institute Symposium to share their groundbreaking research exploring diverse aspects of the brain disorder. Sponsored by Weill Cornell Medicine’s Appel Institute and its home department, the Feil Family Brain and Mind Research Institute, the symposium offered a glimpse into unconventional approaches and ideas that could improve scientists’ understanding of the complex pathology that underlies Alzheimer’s disease and related disorders.

“The theme of this year’s symposium, “Racing Toward a Cure” is aptly put because of the challenges we are facing,” said Appel Institute Director Dr. Li Gan, also the Burton P. and Judith B. Resnick Distinguished Professor in Neurodegenerative Diseases in the Feil Family Brain and Mind Research Institute at Weill Cornell Medicine. She referenced the “sobering statistics” of the rising rates of Alzheimer’s disease, currently at more than 5.7 million people in this country. 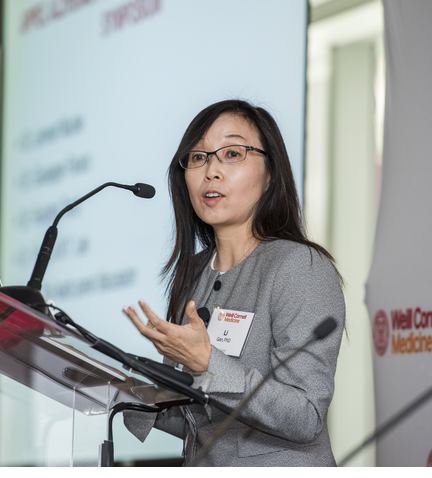 Yet, despite a “string of failures that the field has encountered in just the past few months,” she said, Alzheimer’s disease researchers have made progress in understanding the multi-factorial nature of the disease: the breakdown of communication among neurons in the brain of Alzheimer's disease patients, the role of tau and other pathogenic proteins, the vasculature dysfunction, and the potential role of the immune system in driving the disease process.

This year’s program featured speakers including Dr. Lennart Mucke, director of the Gladstone Institute of Neurological Disease, the Joseph B. Martin Distinguished Professor of Neuroscience and professor of neurology at UCSF; Dr. Giuseppe Faraco, assistant professor of research in neuroscience at Weill Cornell Medicine’s Feil Family Brain and Mind Research Institute; Dr. Rudolph Tanzi, the Joseph P. and Rose F. Kennedy Professor of Neurology at Harvard Medical School and director of the Genetics and Aging Research Unit at the Massachusetts General Hospital; and Dr. Virginia Man-Yee Lee, the John H. Ware 3rd Endowed Professor in Alzheimer’s Research at the Perelman School of Medicine at the University of Pennsylvania.

The speakers’ research marked a distinct break from the field’s intense focus on targeting amyloid beta, the protein fragment that forms the hallmark plaques in the disease, but whose removal has repeatedly failed to slow or stop dementia in patients with Alzheimer’s. Attention has shifted to tau, a protein whose misfolding within neurons forms the “tangles” that are thought to play a role in these brain cells’ death, as well as other proteins that aggregate abnormally in a wide spectrum of neurodegenerative diseases, including Parkinson’s disease, frontotemporal dementia and multiple system atrophy.

Dr. Mucke focused on the role of tau in autism spectrum disorders and epilepsy as a way to learn about the function of the molecule and how it might contribute to brain network dysfunction in Alzheimer’s and related conditions. He noted that both autism spectrum disorders and severe forms of epilepsy are characterized by excessive brain cell signaling and cognitive dysfunction. Dr. Mucke’s laboratory has shown that reducing levels of tau can counteract this excessive brain cell signaling in mice that model these conditions and correspondingly improve behavioral outcomes.

Dr. Faraco’s lab studies the effects of hypertension and dietary salt on the brain. His presentation at the symposium detailed a molecular mechanism by which a high-salt diet, even in the absence of hypertension, could lead to cognitive impairment in mice through the Alzheimer's disease protein tau. His results underscored the importance of having healthy blood vessels in the brain, and suggested interventions to prevent several types of dementia.

Dr. Tanzi’s lab is taking several approaches to understanding Alzheimer’s disease, including constructing brain organoids that can be cultivated in the lab, along with immune and other support cells, to more accurately recapitulate the environment in which neurodegenerative diseases develop. His lecture focused on the hypothesis that the protein aggregates and neuroinflammation that are so deadly in neurodegenerative diseases arose to sequester and eliminate microbes from the brain. In support of the idea, which he calls the Innate Immune Hypothesis of Alzheimer’s Disease, he presented evidence that infections in the brain can trigger the formation of plaques, tangles and other neurotoxic situations. “By having these pathologies so ready to go, whether it is innate immune genes for inflammation or brain cells more prone to amyloid or tangles, there’s a certain subpopulation of humans, that if there’s a huge epidemic of an infection targeting the brain, they are more likely to survive,” he said. “This is a new idea, but it’s something we’re working on based on the data we’ve generated.”

Dr. Lee discussed evidence that tau and other molecules that form pathological aggregates in a variety of neurodegenerative diseases share two main features. Firstly, once seeded in the brain, the aggregated proteins can induce the same kind of pathology in other brain cells, causing the disease to spread. Secondly, different forms of a pathological protein, in different cell types, result in distinct diseases. For example, Alzheimer’s disease; corticobasal degeneration, a rare neurodegenerative disease in which the cerebral cortex and basal ganglia degenerate; and progressive supranuclear palsy, a degenerative condition that affects eye movement, are all characterized by tau pathology, but tau aggregates from the brains of individuals with each disease behave differently when transplanted into mice through the Alzheimer's disease protein tau. 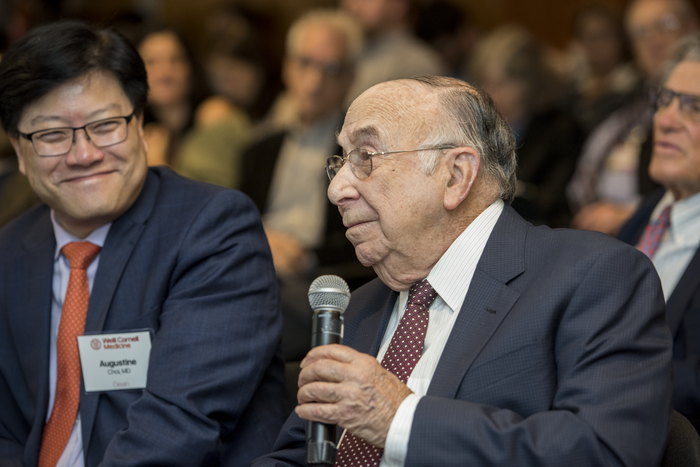 Wide-ranging investigations into the pathology underlying neurodegenerative diseases are critical to progress toward a cure. In his opening remarks, Robert Appel, vice chair of the Weill Cornell Medicine Board of Overseers, emphasized the individual and societal toll of Alzheimer’s disease.

“If left unchecked, there will be over 13 million people with Alzheimer’s disease in the United States by 2050. The cost of 13 million people having Alzheimer’s is roughly a trillion dollars, enough to bankrupt our whole healthcare system,” said Overseer Vice Chair Appel. “So it must be cured, it must be delayed and that’s why this research is so very important.”