Scientists Discover the Basics of how Pressure-sensing Piezo Proteins Work 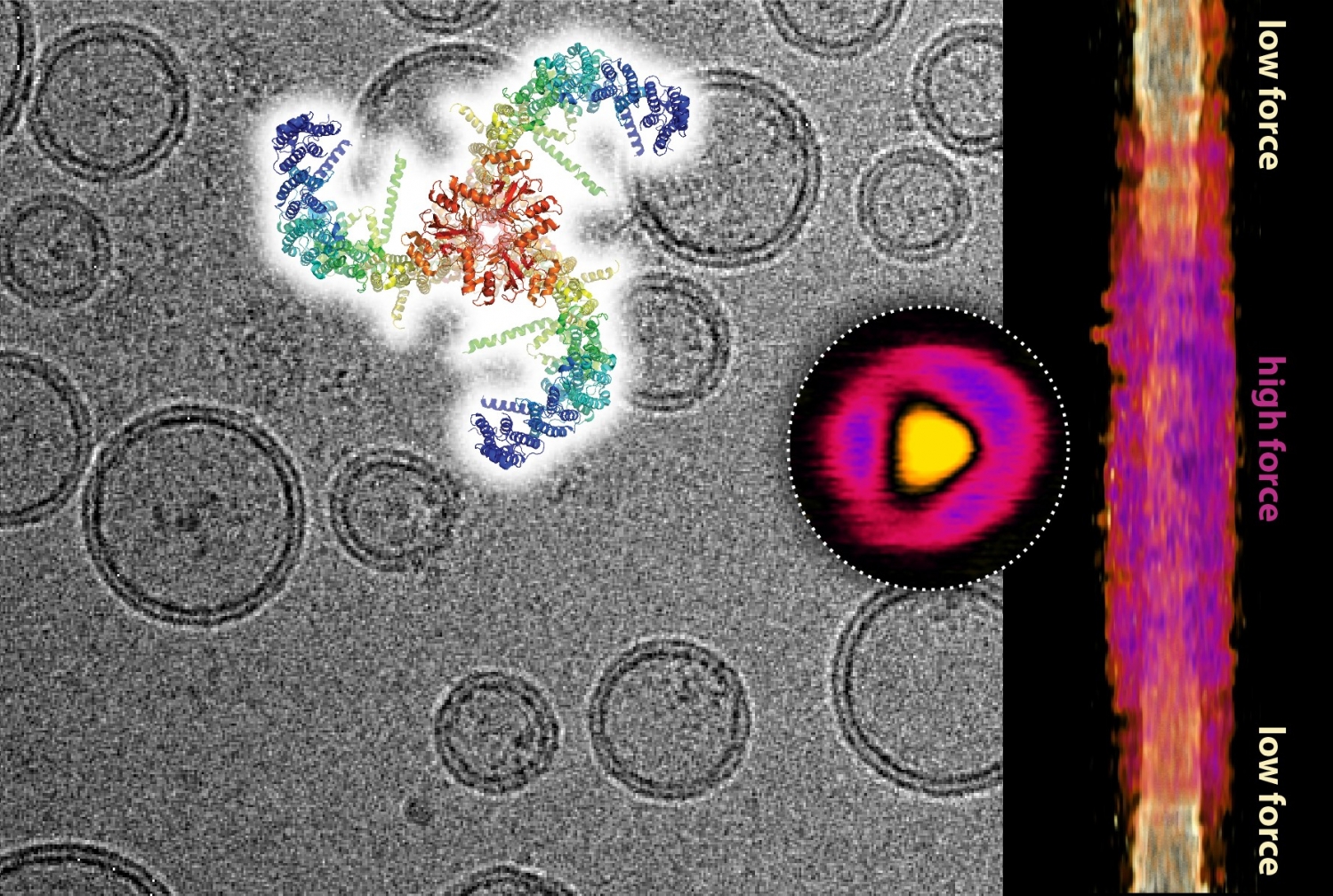 Composite of a cryo-electron microscopy image showing lipid vesicles with embedded Piezo channels, and the Piezo channel structure (top). Topographic image of a single Piezo channel under force as recorded by high-speed atomic force microscopy (circle) and its lateral expansion in the membrane as a function of applied force (right). All images: Dr. Simon Scheuring.

A team of scientists from Weill Cornell Medicine and The Rockefeller University has illuminated the basic mechanism of Piezo proteins, which function as sensors in the body for mechanical stimuli such as touch, bladder fullness and blood pressure. The discovery is a feat of basic science that also opens up many new paths of investigation into the roles of Piezo proteins in human diseases and potential new therapeutic strategies.

In the study, published Aug. 21 in Nature, the scientists used advanced microscopy techniques to image the Piezo1 protein at rest and during the application of mechanical forces. They confirmed this complex protein’s structure and showed essentially how it can convert mechanical stimuli into an electrical signal.

“Our analysis shows that tension on the cell membrane in which Piezo1 is embedded can flatten and widen the protein’s structure,” said co-senior author Dr. Simon Scheuring, a professor of physiology and biophysics in anesthesiology at Weill Cornell Medicine. Dr. Scheuring and his laboratory collaborated on the study with the laboratory of Dr. Roderick MacKinnon, a professor of molecular neurobiology and biophysics at The Rockefeller University. Dr. MacKinnon was co-recipient of the Nobel Prize in Chemistry in 2003 for his work determining the structures and mechanisms of ion channel proteins. 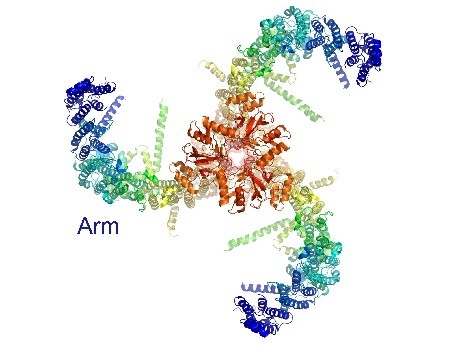 Piezo1 and Piezo2 are very large and complex proteins with unique structures. They are embedded within the membranes of certain cell types, and their function is to transduce mechanical force on cells into electrical signals that alter cell activity. Piezo1 proteins work for example in bladder cells to detect when the bladder is full, and in blood vessel-lining cells to detect and help regulate changes in blood pressure. Piezo2 proteins work in sensory nerve endings in the skin and joints, helping to mediate the senses of touch, pain and proprioception—the sense of how one’s limbs are arranged.

Advances in imaging techniques have enabled scientists in recent years to determine the basic structure of Piezo1—a structure that Piezo2 is thought to mostly share. From above this structure has a three-armed, propeller or “triskelion” appearance.

From the side it looks like a shallow bowl embedded in the cell membrane, with an ion channel at its center. The latter, when opened, allows a flow of calcium and other positively charged ions into the cell. 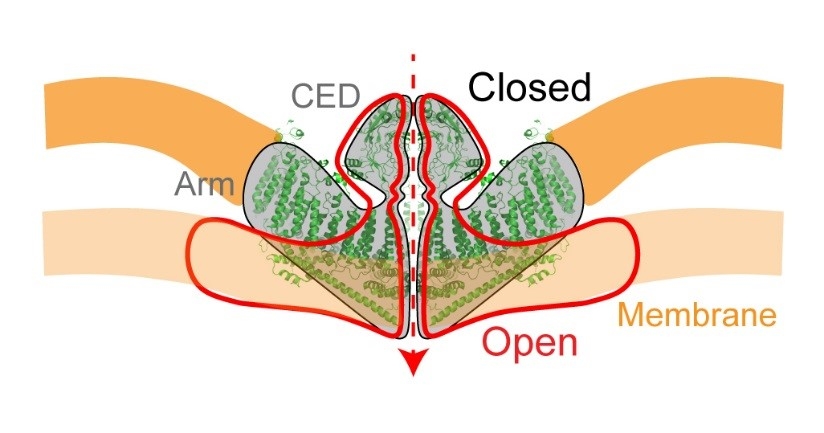 The basic mechanism by which mechanical force opens the ion channel has remained mysterious. But in the new study Dr. Scheuring and Dr. MacKinnon and their colleagues, including lead author Dr. Yi-Chih Lin, a postdoctoral associate in anesthesiology, were able to get a clearer picture of how it works.

They combined cryo-electron microscopy with a less well-known technique called high-speed atomic force microscopy, which produces an image of an object essentially by feeling its surface with a super-sensitive mechanical probe. They showed with these methods that Piezo1 is a springy structure that normally bends the cell membrane where it sits, but will flatten out when, for example, a mechanical force is applied to the cell membrane.

“As the membrane tension increases, the structure of Piezo1 flattens and stretches out to occupy a larger area, which in turn opens the ion channel,” Dr. Scheuring said.

He noted the possibility that other stimuli that stretch and flatten the Piezo1 structure, such as a pulling force on its arms from the inside or on an external domain called the CED from the outside the cell, in principle could open the ion channel—making it a suitably versatile mechanism for the wide range of cell types and physiological functions in which it works.

Proposed mechanisms of action of Piezo1 in response to force. Left: Changes in membrane properties, such as tension or curvature, lead to a force that opens Piezo1. Right: Piezo1 channel is activated when structures inside or outside the cell push or pull on the ion channel.

Moreover, given this wide range of cell types—in organs including the lungs, bladder, intestines and pancreas, as well as in blood vessels and the sensory nervous system—the discovery of the basic Piezo-protein mechanism could lead to new ways of understanding and treating many human diseases. To take one example, Dr. Scheuring said, if the membranes of cells lining blood vessels contain excess cholesterol they would become stiffer, increasing the background tension on embedded Piezo 1 proteins and potentially disrupting these proteins’ normal ability to detect and help regulate blood pressure.

“Our finding leads to a great many predictions about Piezo proteins’ roles in disease that we and others can now go and investigate,” he said.