Failure to Communicate: Early Disruptions in Brain Cell Activity May Give Rise to Autism 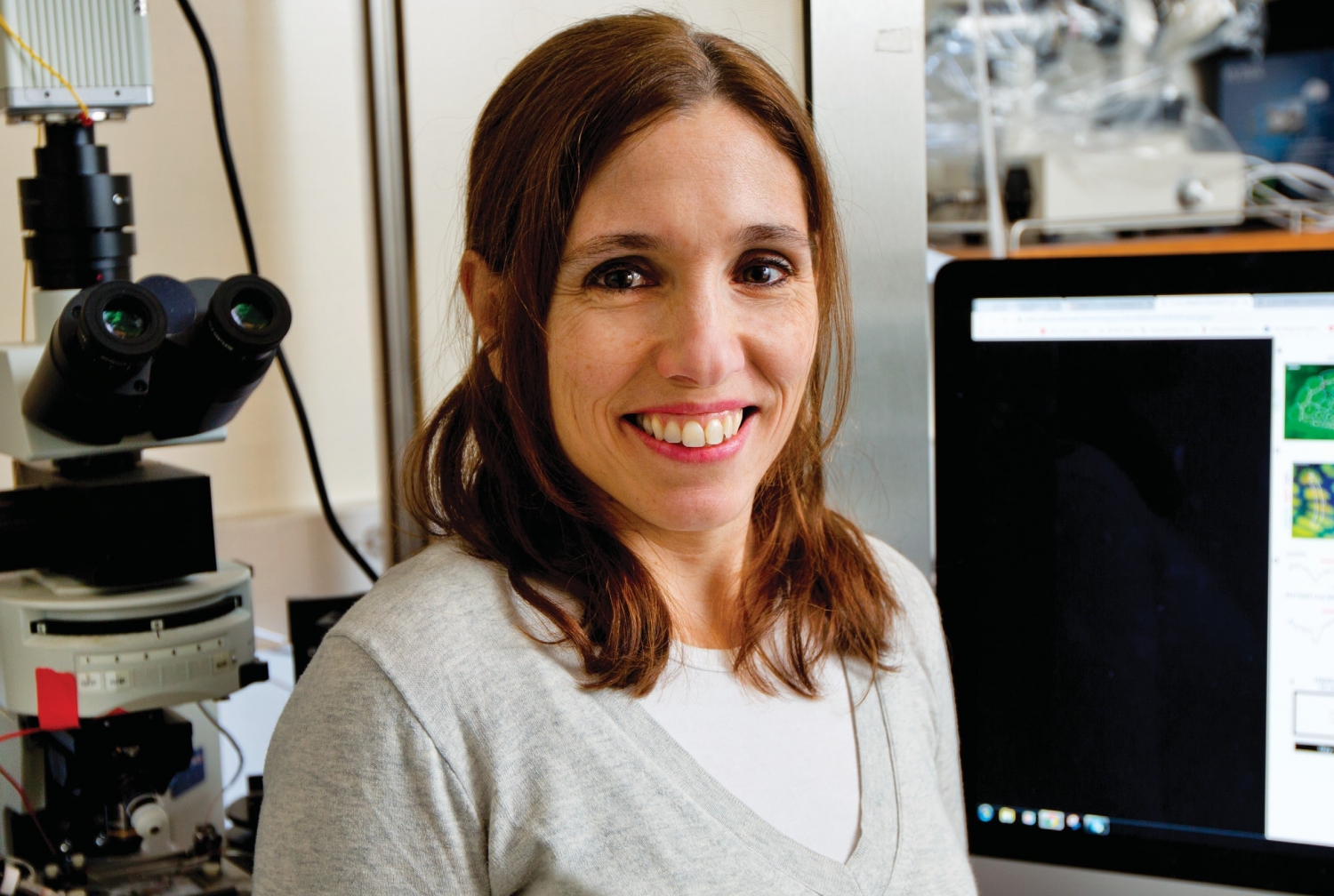 Despite decades of research, it’s still not clear what causes autism, which now affects one in 59 children in the United States. While genetic factors are involved, they don’t fully explain how the disorder arises in the brain. This lack of certainty contributes to the dearth of universal treatments for the condition, whose prevalence has more than doubled since the turn of the millennium. Dr. Natalia De Marco García, an assistant professor of neuroscience and a member of the Feil Family Brain & Mind Research Institute at Weill Cornell Medicine, is parsing the intricate neural underpinnings of autism in search of more definitive answers.

On the Weill Cornell Medicine faculty since 2014, Dr. De Marco García studies how developing neural cells communicate with one another to form a healthy nervous system; disruptions of intercellular communication within the system are thought to play a role in the emergence of autism. Some of Dr. De Marco García’s keenest interests lie in interneurons—specialized nerve cells that facilitate these neural chats. The human body contains some 20 billion of these tiny, skilled intermediaries. Scientists are learning that interneuronal diversity is also immense. “We keep getting information that there are many more subtypes than we could ever imagine,” Dr. De Marco García says.

Interneurons that inhabit the brain’s cortex often malfunction in individuals with autism, previous research has shown. In fact, some scientists have pointed to this impairment as a potential cause of the disorder—a hypothesis supported by evidence that many genes linked to autism are strongly expressed in developing cortical interneurons. Researchers also suspect that deficits in interneuron function may give rise to sensory impairments—a common symptom of autism that can manifest itself through abnormal reactions to touch or certain sounds. While this theory remains to be confirmed, Dr. De Marco García’s recent research strengthened its foundation. 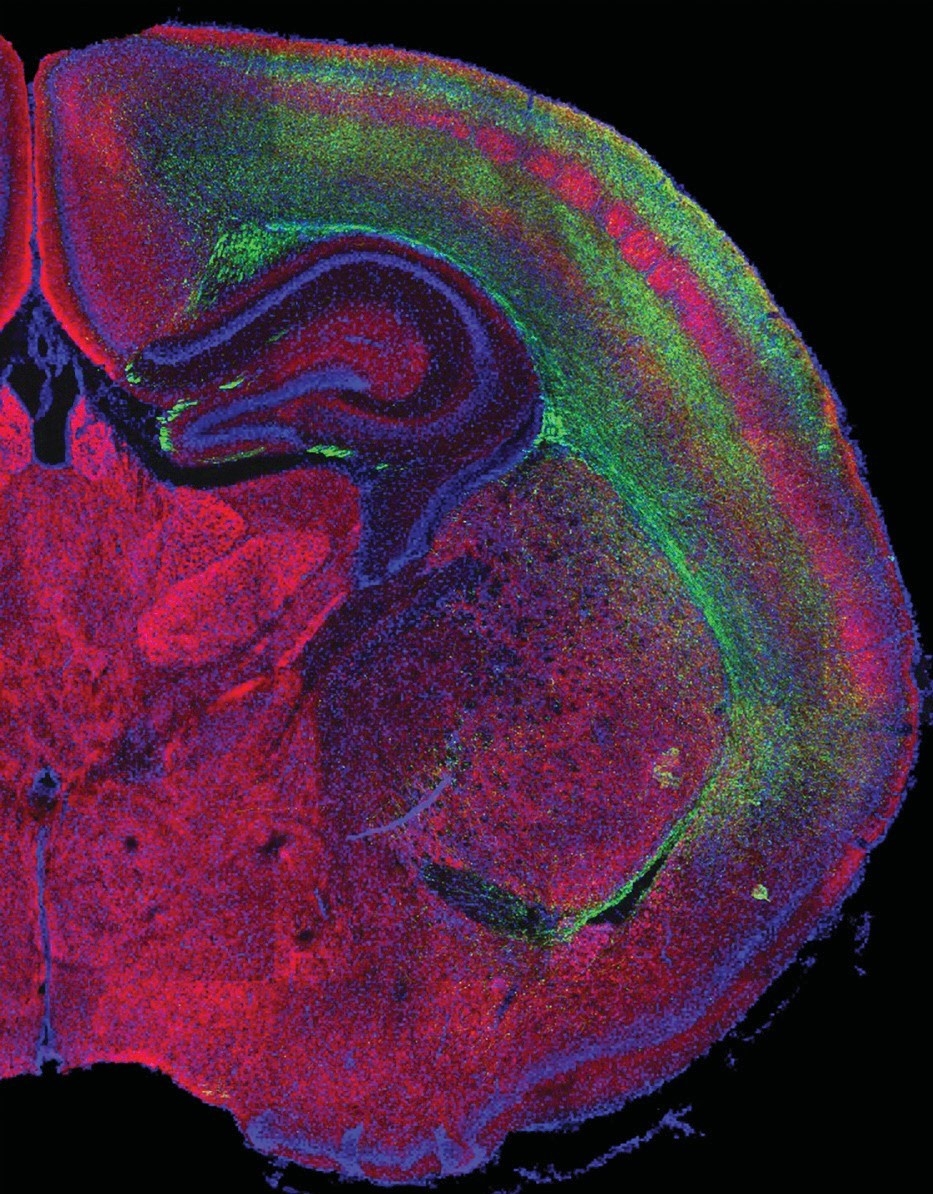 With Feeling: The cerebral cortex’s receptive areas for the sense of touch (depicted in red) are seen surrounded by neural cell projections (green).

In a study published online in Neuron in June 2018, Dr. De Marco García’s team looked at how quickly cortical interneurons develop in young mice, finding that the nerve cells become functional just six days after birth. To mimic the dysfunction that may befall human interneurons, the researchers artificially disrupted the cells’ activity in other young mice a few days after birth—a period critical for interneuronal development. When the rodents grew up, they were able to receive sensory stimuli from the environment, but failed to process them correctly; for example, they couldn’t differentiate textures by touch.

These findings suggest that, at least in mice, disrupted interneuron function early in life may indeed lead to sensory problems. But Dr. De Marco García’s ultimate goal is to understand how they occur in people—to study the development of human interneurons and to figure out how to intervene if dysfunction arises. Her ultimate dream is to find a non-invasive way to repair interneuron function in individuals with autism. “If you could restore the way in which the neurons talk to each other,” she says, “then you might be able to repair behavior.”

Dr. De Marco García’s passion for deciphering neuroscientific mysteries dates back to when she was nearing the end of her undergraduate studies in biology in her native Argentina. She took three neuroscience courses and became smitten with the many secrets lurking in the human brain. “It’s a very complex organ,” says Dr. De Marco García, who holds a doctorate in neuroscience from Columbia. “We know very little about it, and it’s a defining feature for humans.” One long-neglected structure that has captured Dr. De Marco García’s interest is the insula—a small but industrious region of the cortex whose dysfunction has been implicated in depression, bipolar disorder and autism. Among the area’s many roles is integrating, interpreting and responding to various sensory stimuli—tactile feedback, images, sounds and flavors—that the brain receives from the outside world.

In a key function that is often disturbed in people with autism, the insula also allows people to read their internal bodily signals such as hunger, thirst, heartbeat and body temperature. Dr. De Marco García and her team are now mapping the complex communication pathways spanning the primary somatosensory cortex—the brain’s major receptive area for the sense of touch—the insula and other regions responsible for cognition. Through this research, Dr. De Marco García aims to see how the brain selects the relevant sensory information from the plethora of environmental stimuli. The findings, she hopes, will pave the way to a more thorough understanding of how sensory impairments arise. “It’s a constant challenge,” Dr. De Marco García says of her work, “but it’s very rewarding.”