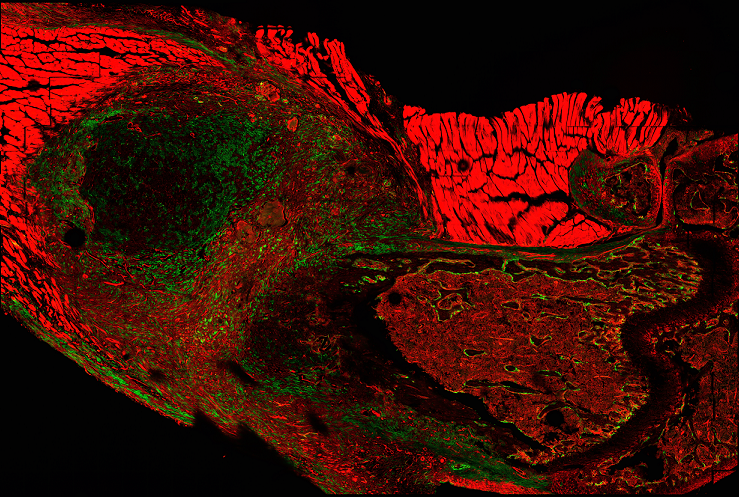 A type of stem cell newly discovered by Weill Cornell Medicine and NewYork-Presbyterian investigators is responsible for growing and healing the hard, outer surface of bone, according to a study published Sept. 24 in Nature. The findings suggest that bones contain multiple populations of stem cells, each with their own unique roles and anatomic locations.

The paper is the first to identify these stem cells, called periosteal stem cells, on the surface of mouse bone as well as human bone samples. The researchers’ discovery also reveals a new therapeutic target for bone disorders such as osteoporosis, fractures and skull malformation disorders.

“We are the first researchers to identify these periosteal stem cells, a population of stem cells found on the outside of bones that is distinct from those found inside,” said senior author Dr. Matthew Greenblatt, an assistant professor of pathology and laboratory medicine at Weill Cornell Medicine and a pathologist at NewYork-Presbyterian/Weill Cornell Medical Center. “We expect that periosteal stem cells are the cells responsible for activating bone strengthening processes.”

Stem cells are at the top of the “family tree” of all other cell types. They have the ability to create copies of themselves as well as develop into more specialized cells that perform distinct functions in the body. Researchers have long known that the cells that cover the outer surface of bone, called the periosteum, are responsible for growing strong bones and healing skeletal fractures. But the source of cells in the periosteum was unknown.

Dr. Greenblatt and colleagues at Weill Cornell Medicine and NewYork-Presbyterian —including first author Dr. Shawon Debnath, Dr. Dan Landau, Jason McCormick and Dr. Tuo Zhang—were studying mice whose skeletal cells had been labeled by using genes known to be important in bone to express fluorescent markers. They discovered one gene called Cathepsin K broadly labeled cells on the outside of bone, suggesting they had found a new type of stem cell.

To pinpoint the source, they conducted a series of experiments, identifying successively smaller populations of cells labeled with Cathepsin K and using a technique called single-cell RNA sequencing to track gene expression distinct to these stem cells. In transplantation experiments, the newly discovered periosteal stem cells only made bone and not cartilage, confirming that they were distinct from skeletal stem cells found inside the bone marrow that form both bone and cartilage.

“This is the first direct evidence that bone contains multiple populations of stem cells with different functions and anatomic locations,” Dr. Greenblatt said. “Until now, drug discovery has involved looking at a mixed bag of stem cells from inside and outside bone. We believe that many therapies that build bone to treat osteoporosis may work by activating these periosteal stem cells. Working directly with this exact cell type will be essential for developing new targeted drugs for osteoporosis and healing bone injuries.”

Dr. Greenblatt and his team are now collaborating with neurosurgeons at Weill Cornell Medicine, NewYork-Presbyterian and other institutions to see if dysfunctional periosteal stem cells may be an underlying cause of a range of birth defects affecting the skull, such as skull bones not fusing correctly in babies.

“We also plan to investigate whether periosteal stem cells are involved in bone cancers,” Dr. Greenblatt said. “Most stem cell types in the body have a tumor equivalent. Our discovery gives us an exciting new avenue to investigate how different forms of bone cancer may arise.”