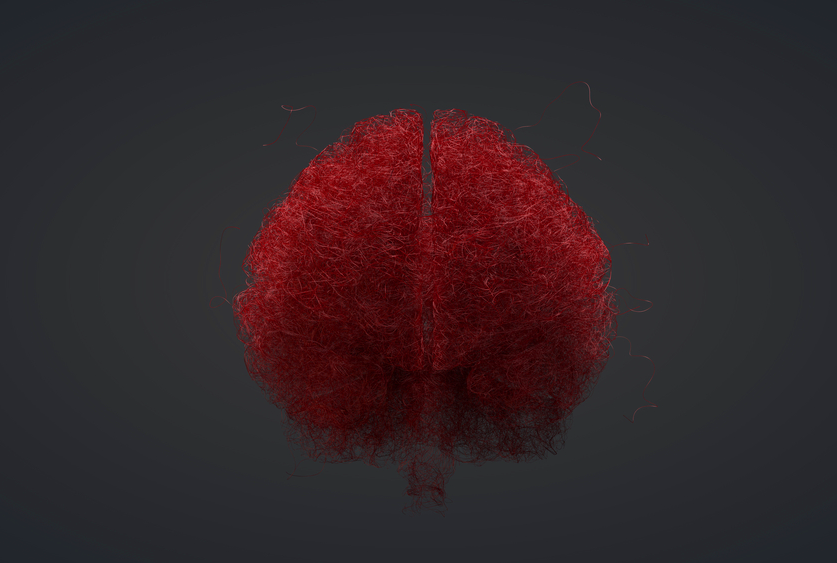 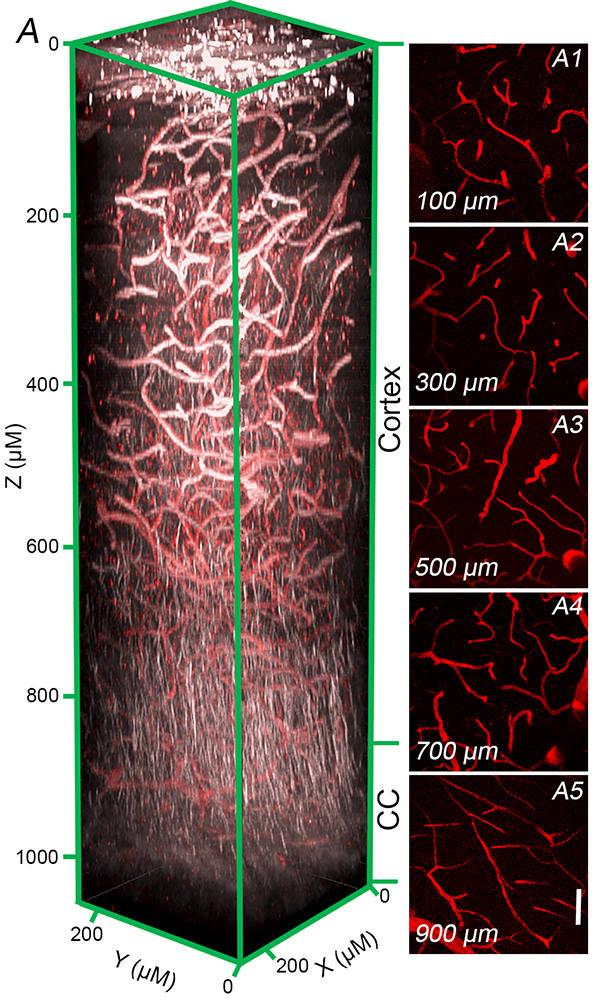 Cerebral vasculature imaged by 3-photon microscopy in a living mouse. This technology enabled investigators to analyze blood flow in areas deep in the substance of the brain, where ApoE4 promotes damage implicated in vascular dementia and Alzheimer’s disease.

“We found that the brains of mice with ApoE4 have less blood flow in the resting state, and are also less able to increase blood flow when brain activity demands it—which leaves them much more vulnerable to brain damage,” said senior author Dr. Costantino Iadecola, director and chair of the Feil Family Brain and Mind Research Institute (BMRI) and the Anne Parrish Titzell Professor of Neurology at Weill Cornell Medicine.

Apolipoprotein-E (ApoE) is a cholesterol carrier produced in the brain and other tissues. ApoE4 is one of its three common variants in humans, present in about 14 percent of people worldwide. ApoE4 also brings a higher risk of heart disease and stroke, and in recent years has been linked to vascular dementia—a form of cognitive impairment that accounts for about 20 percent of all dementia cases. For reasons that are not entirely clear, it is the strongest genetic risk factor for Alzheimer’s disease.

Vascular dementia may have multiple specific causes, but due to inadequate local blood supply, generally features small patches of damage in the nerve fiber tracts, or white matter, that connect different brain regions. These lesions are also present in Alzheimer’s disease brains and, together with the accumulation of amyloid plaques and neurofibrillary tangles from the protein tau, are thought to cause cognitive deterioration. How ApoE4 promotes this damage has been a challenge to determine because of the technical difficulty of studying blood vessels deep in the substance of the brain.

Dr. Iadecola’s team overcame this hurdle with the help of an advanced imaging technology known as 3-photon microscopy. The technology, originally developed at the School of Applied and Engineering Physics on Cornell’s Ithaca campus, enabled Drs. Chris Schaffer and Sung Ji Ahn of the Meinig School of Biomedical Engineering, collaborators in the study, to image at high resolution blood vessels and nerve fiber tracts deep within the brains of living mice.

The scientists examined mice whose ApoE gene had been replaced with the gene for ApoE4, which normally occurs only in humans. Comparing these ApoE4 mice to normal mice, they found that the former, while at rest, had 14 and 19 percent less blood flow, respectively, in two brain regions, the caudate nucleus and the somatosensory cortex—representing areas affected in humans with vascular dementia. By contrast, mice engineered with ApoE3, the most common human ApoE variant, had the same level of cerebral blood flow as normal mice. Close inspection of the ApoE4 mice’s cerebral vessels revealed the reason for the reduced blood flow: the density of vessels was lower.

Further experiments showed that the cerebral vessels of the ApoE4 mice were also less able to dilate themselves to increase their flow, as they normally do in response to increased brain activity. When the major arteries supplying blood to the brain were narrowed artificially, modeling the age-related thickening of arterial walls that happens in humans, the lower baseline flow and reduced responsiveness of the ApoE4 mice’s cerebral vessels led to much greater brain damage. The pattern of brain damage resembled that seen in human vascular dementia and in a large number of Alzheimer’s disease patients.

“We suspect that this ‘oxidative stress’ is the driver of the vascular impairment in ApoE4-positive individuals,” said Dr. Laibaik Park, an assistant professor of research in neuroscience in the BMRI and the co-senior author of the study.

Dr. Iadecola and his laboratory are continuing to investigate how ApoE4 harms normal cerebral vessel function. The research could lead to future therapies that block ApoE4-induced oxidative stress to ameliorate vascular dementia and potentially other ApoE4-linked conditions such as Alzheimer’s disease.