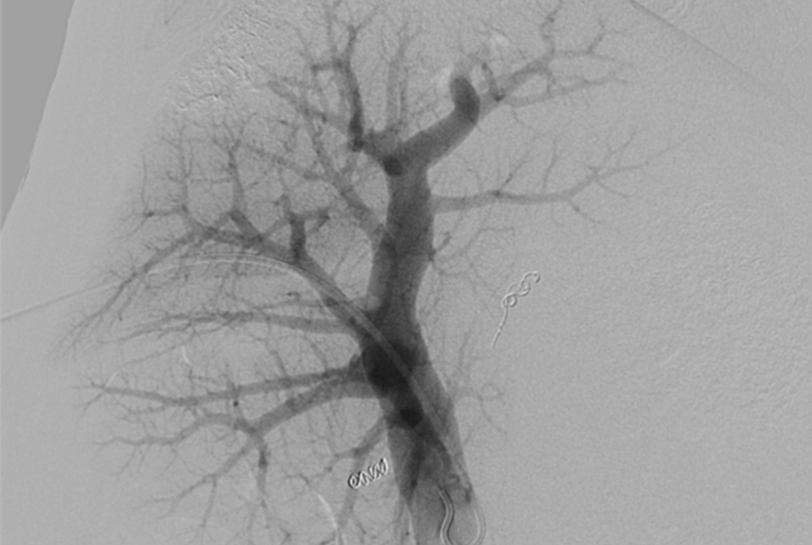 The small-scale animal study, published in the October issue of Radiology, was a test of the basic feasibility of the cell delivery technique and not designed to prove safety or effectiveness. Still, the researchers found that the interventional therapy—a single, image-guided infusion of blood vessel cells called endothelial cells derived from liver tissue—was followed by an apparent lessening of liver damage in pigs that had liver cirrhosis before the treatment. If the scientists can replicate the findings in humans, it could offer an alternative treatment for liver cirrhosis, which affects more than 600,000 people in the United States alone.

“There was a reduction in markers of cirrhosis and related injury to structures in the liver, and we didn’t see any bleeding, clotting or other harm from the technique itself,” said first author Dr. Kyungmouk Steve Lee, an assistant professor of radiology at Weill Cornell Medicine and an interventional radiologist at NewYork-Presbyterian/Weill Cornell Medical Center. 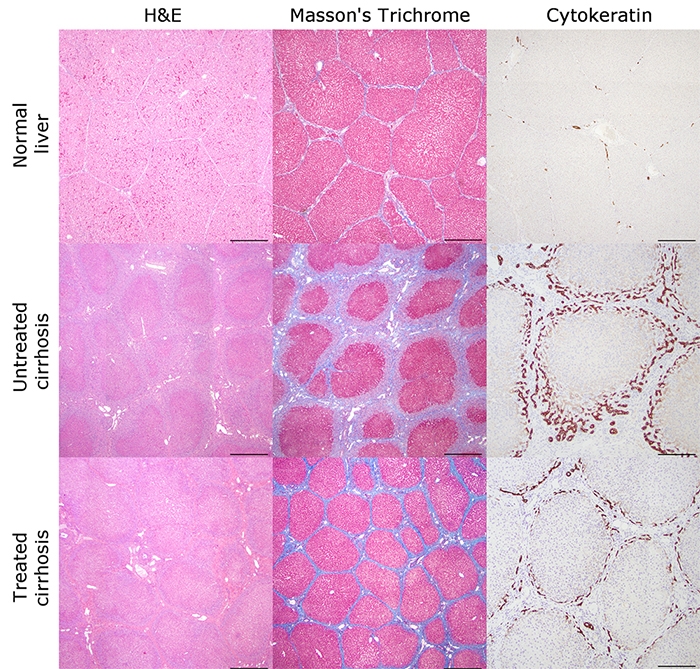 Liver cirrhosis, which features chronic inflammation and fibrosis—an accumulation of fibrous, scar-like tissue—is most commonly caused by chronic heavy drinking and chronic viral infection by the Hepatitis B and C viruses. Most patients are unaware of their condition, which typically progresses to liver failure or liver cancer, and the only truly effective treatment is a liver transplant.“The difference in the appearance of liver cells in the treated versus untreated animals was impressive,” said senior author Dr. David Madoff, vice chair for academic affairs in the Department of Radiology and a professor of radiology at Weill Cornell Medicine, and an interventional radiologist at NewYork-Presbyterian/Weill Cornell Medical Center.

Scientists have been exploring the potential of stem cell and other cell therapies to regenerate fibrosis-damaged organs including cirrhotic livers. One problem with this strategy is that inflammatory and other disease processes within a damaged organ tend to create an inhospitable environment—or “niche”—for transplanted cells and even for resident stem cells. Study co-author Dr. Shahin Rafii and colleagues have shown in prior work, however, that vessel-lining endothelial cells can produce special organ-specific growth factors, known as angiocrine factors, that restore a healthier niche and promote regeneration without provoking scarring.

“In the case of liver cirrhosis, blood vessels in the liver are damaged and fail to supply angiocrine factors that promote regeneration. So the idea underlying this endothelial cell therapy is to rejuvenate that vascular niche,” said Dr. Rafii, director of the Ansary Stem Cell Institute, the Arthur B. Belfer Professor of Genetic Medicine and chief of the Division of Regenerative Medicine at Weill Cornell Medicine. Dr. Rafii is a co-founder and consultant with equity in Angiocrine Bioscence, a cellular therapy company. “Accordingly, the remaining hepatocyte progenitors in the liver can get the proper signals from angiocrine factors they need to suppress fibrosis and regenerate liver tissue.”

For the study, the investigators harvested small quantities of endothelial cells from the liver vessels of eight pigs, and multiplied the cells to large quantities in the laboratory. After inducing cirrhosis in each pig’s liver, the researchers then treated half of the pigs in an interventional radiology suite by infusing the liver-specific endothelial cells into a large vein that runs into the liver, using a small catheter inserted through the skin and guided by ultrasound and live x-ray imaging.

Although the number of pigs in the study wasn’t large enough to determine the therapeutic effectiveness of the technique, examination of the pigs’ livers three weeks after treatment revealed some striking differences between treated and untreated animals. When the investigators examined samples of cells and tissues taken from the treated pigs’ livers under the microscope, they found that the organ appeared much more like the livers of healthy pigs, in contrast to the untreated livers.

“These were very encouraging results,” said Dr. Madoff, who is a member of the clinical advisory board with equity in Angiocrine.

The Weill Cornell Medicine researchers now hope to conduct larger trials of the endothelial cell therapy in pigs and, if they are successful, progress to clinical trials in humans. In principle, the investigators said, the cell therapy could be used to treat not just cirrhosis but other forms of liver injury as well.