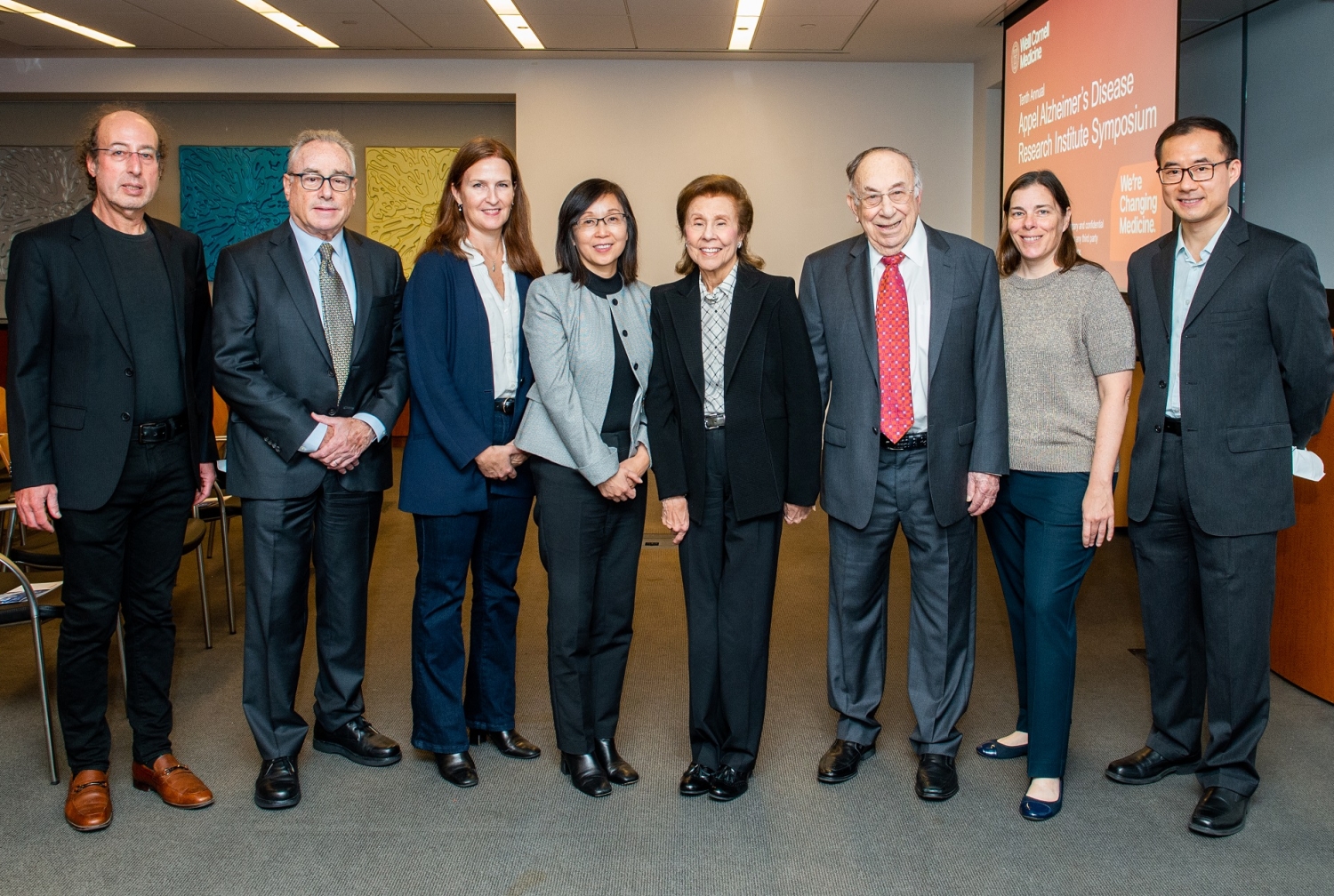 The 10th annual Appel Alzheimer's Disease Research Institute Symposium brought fascinating reports of progress in understanding Alzheimer’s and related neurodegenerative diseases. The event was held at the Belfer Research Building on Oct. 25, before an in-person and Zoom audience.

“With some recent new science, we know at least that we’re looking in the right direction, and that ultimately science will defeat this terrible disease,” said Board of Fellows Vice Chair Robert J. Appel, in welcoming remarks.

A global effort is required to move the field forward, noted Appel Institute Director Dr. Li Gan, who is also the Burton P. and Judith B. Resnick Distinguished Professor in Neurodegenerative Diseases in the Feil Family Brain and Mind Research Institute at Weill Cornell Medicine. “Our mission at the Appel Institute is to work collaboratively, both together and with the greatest minds in the world, to find treatment for Alzheimer’s disease, Parkinson’s disease, fronto-temporal dementia and other neurodegenerative diseases.”

In the first presentation, Dr. Karen Duff, director of the University College London center of the UK Dementia Research Institute, described her recent work on tau, one of the two proteins that form large aggregates in the brains of patients with Alzheimer’s disease. Many scientists suspect that aggregates of tau, which spread via an infection-like chain-reaction process in the brain, are the ultimate drivers of neuron loss and dementia in Alzheimer’s. Aggregates of amyloid beta, the other hallmark protein in Alzheimer’s, accumulate in early, relatively asymptomatic stages of the disease, but their relevance after dementia occurs is unclear.

“We have some drugs now for targeting amyloid beta, but we really are still very much in the dark as to how to target tau and prevent it from causing further degeneration,” Dr. Duff said.

She and her colleagues are trying to understand better how tau aggregates form and spread. They have begun to zero in on small capsules called extracellular vesicles, which cells use to package molecules they want to send to other cells—or just want to get rid of. The researchers are finding evidence that the most “infectious,” disease-relevant types of tau aggregates somehow form within these extracellular vesicles, and also use the vesicles as vectors for their neuron-to-neuron spread.

Dr. Kenneth Kosik, the Harriman Professor of Neuroscience and co-director of the Neuroscience Research Institute at the University of California Santa Barbara, presented some findings from his lab’s investigation of tau aggregation. He and his colleagues have found evidence that this aggregation can be triggered by lipids—water-shunning molecules that include cholesterols and other fats. Dr. Kosik and his team suspect that in at least some tau-linked brain disorders, tau or its aggregates also cause damage to the lipids that make up brain cell membranes, setting up a vicious cycle: Tau-damaged lipid membranes lead brain cells to make more lipids, which then accelerate tau aggregation. This process, Dr. Kosik said, may happen differently in different brain cells, helping to account for the diversity of tau-linked brain conditions including Alzheimer’s, chronic traumatic encephalopathy, and fronto-temporal dementia.

Dr. Catherine Kaczorowski, professor and Evnin Family Chair in Alzheimer’s Research at The Jackson Laboratory, described how her Alzheimer’s work represents a departure from the usual emphasis on tau, amyloid beta and other suspected culprits. She and her colleagues have bred a large, genetically diverse colony of mice, and have been examining how natural gene variants protect some of these animals from the effects of early-onset Alzheimer’s mutations. One discovery from this effort, in 2017, was a super-protective variant in the gene encoding apo-E, a protein that shuttles cholesterol to neurons in the brain. The finding effectively anticipated the discovery, two years later, of a very similar protective mutation in a Colombian woman—who harbored an aggressive early-onset Alzheimer’s mutation but died in her late 70s with only mild cognitive impairment. Dr. Kaczorowski’s overall strategy is to identify natural resilience factors like these, so they can be translated into therapies to “convert someone who is destined to have dementia” to the path of normal cognitive aging.

Dr. Zhuhao Wu, an assistant professor of neuroscience in the Appel Institute at Weill Cornell Medicine, explained his own promising direction in neurodegenerative disease research: zooming out to get a holistic view of the whole brain. His lab uses special 3D imaging techniques with fluorescent probes to profile different cell types across brain regions, trace long-distance connections between neurons, or delineate other brain features, down to cellular-level resolution. As Dr. Wu emphasized, the brain is an enormously complex, integrated, and macro-scale organ that can never be fully understood—in health or disease—by looking only at its subregions.

This whole-brain approach faces many hurdles, not least the problem of computing and memory overload when dealing with such vast complexity. Even a mouse brain is a challenge in terms of data-crunching. However, Dr. Wu said, “we are teaming with a stellar group of scientists to image an entire human brain at cellular resolution—which has never been done before. This effort will lead to the development of a new platform to empower broad brain research topics.”