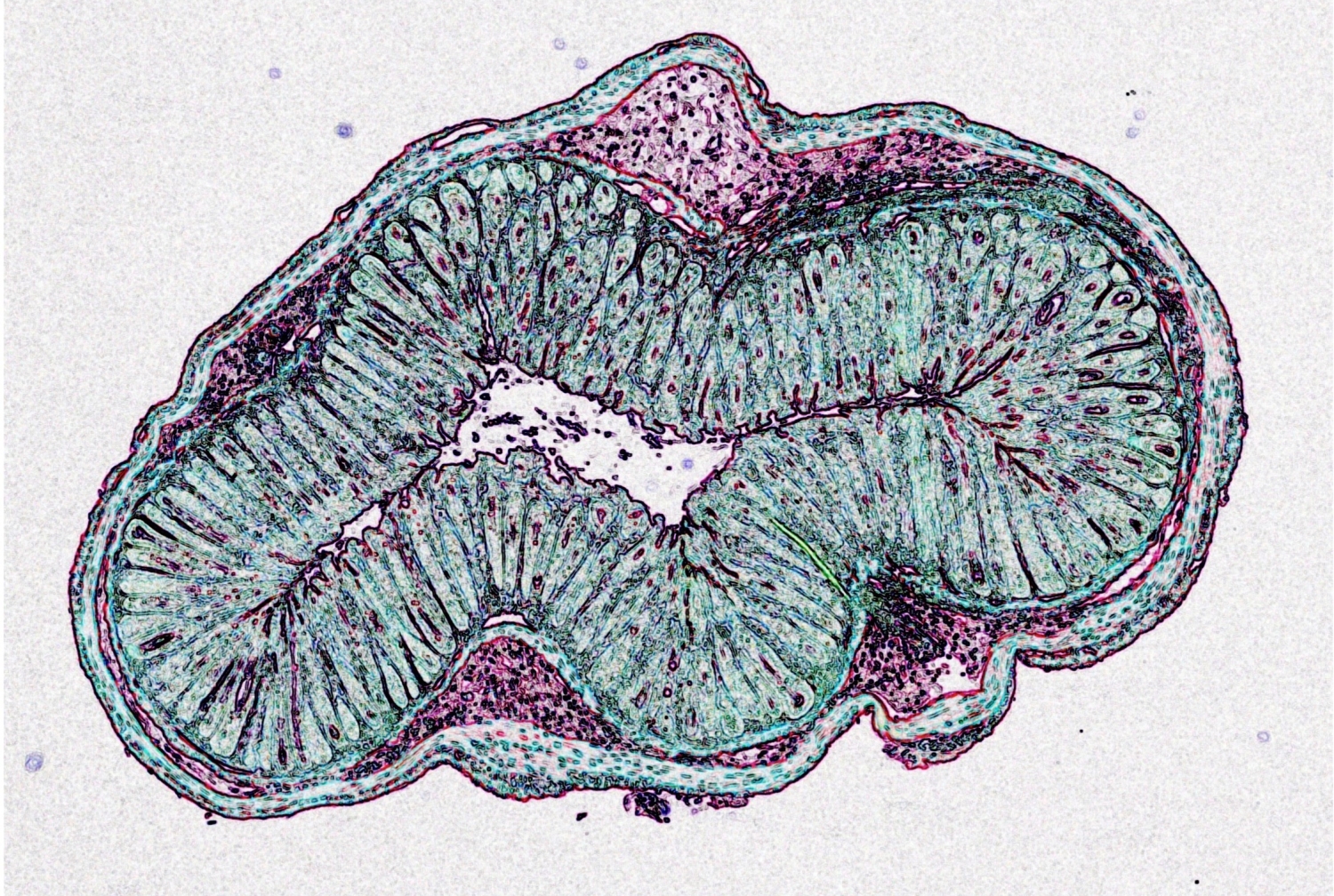 Histologic image of the healthy mouse intestine where the mucosal immune system must remain tolerant to trillions of beneficial microbes, termed the microbiota. Image provided by Dr. Gregory F. Sonnenberg

Immune cells called group 3 innate lymphoid cells (ILC3s) play an essential role in establishing tolerance to symbiotic microbes that dwell in the human gastrointestinal tract, according to a study led by researchers at Weill Cornell Medicine.

The discovery, reported Sept. 7 in Nature, illuminates an important aspect of gut health and mucosal immunity—one that may hold the key to better treatments for inflammatory bowel disease (IBD), colon cancer and other chronic disorders.

“As part of this study, we define a novel pathway that drives immune tolerance to microbiota in the gastrointestinal tract,” said senior author Dr. Gregory F. Sonnenberg, the Henry R. Erle, M.D.-Roberts Family Associate Professor of Medicine and head of basic research in the Division of Gastroenterology & Hepatology, and a member of the Jill Roberts Institute for Research in Inflammatory Bowel Disease at Weill Cornell Medicine. “This is a fundamental advance in our understanding of mucosal immunity and may hold the key to understanding what goes wrong when the immune system begins to inappropriately attack microbiota in diseases such as IBD.” 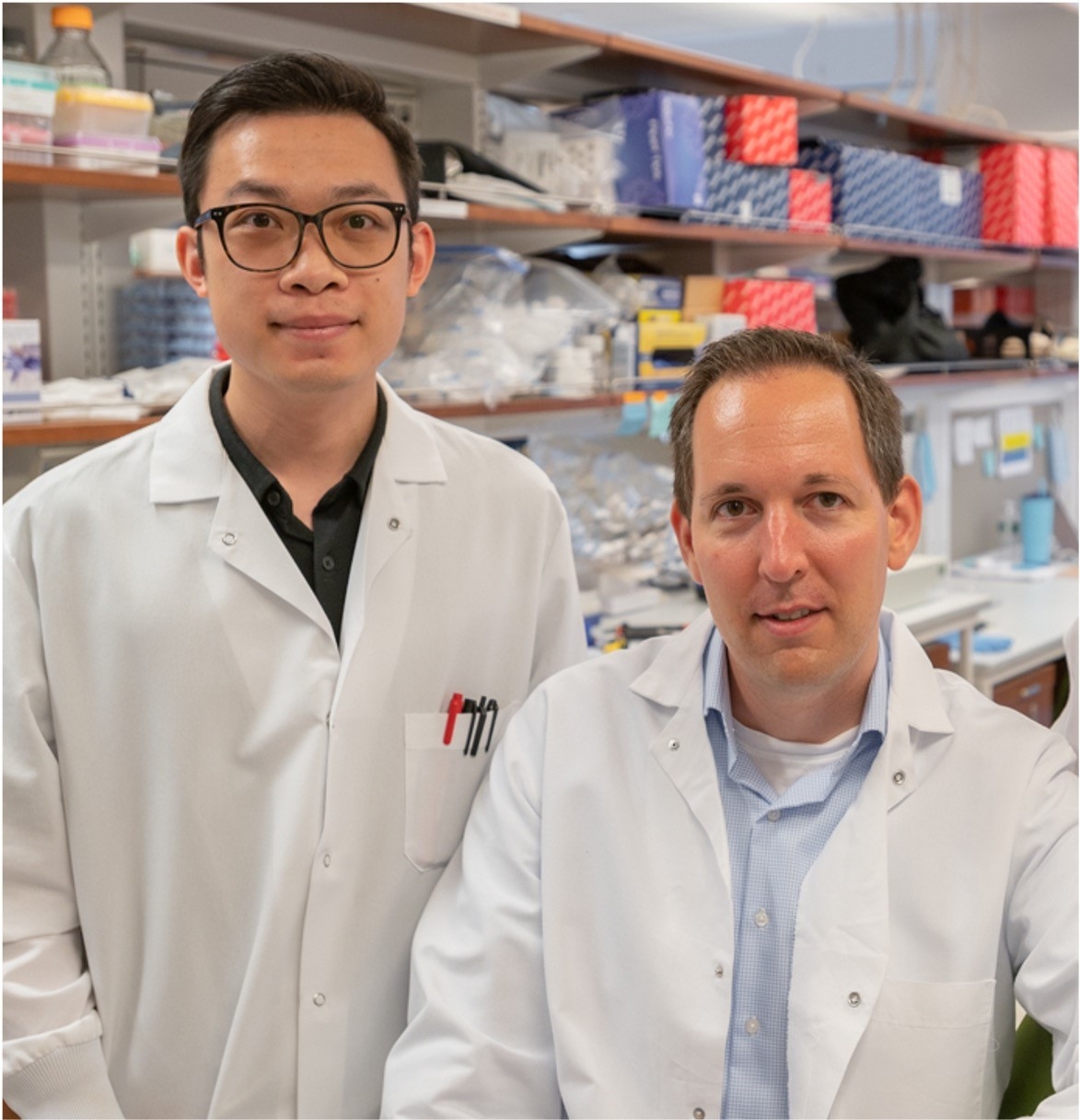 Scientists have long known that trillions of bacteria, fungi, and other microbes dwell symbiotically in the intestines of mammals. The mechanism by which the immune system normally tolerates these “beneficial” gut microbes, instead of attacking them, has not been well understood. But there is evidence that this tolerance breaks down in IBD, leading to harmful flareups of gut inflammation. Thus, a detailed understanding of gut immune tolerance could enable the development of powerful new treatments for IBD—a class of diseases that include Crohn’s disease and ulcerative colitis, which affect several million individuals in the United States alone.

In the study, Dr. Sonnenberg and colleagues, including lead author Dr. Mengze Lyu, a postdoctoral researcher in the Sonnenberg lab, used single-cell sequencing and fluorescent imaging techniques to delineate immune cells in the mesenteric lymph nodes that drain the intestines of healthy mice. They focused on cells expressing a transcription factor, RORγt, which are known to drive either inflammation or tolerance in response to microbes that colonize the intestine. The dominant immune cell types in these tissues, they found, were T cells and ILC3s. The latter are a family of immune cells that represent an innate counterpart of T cells, and work as a first line of defense in mucosal tissues such as the intestines and lungs.

In close collaboration with researchers at the University of Birmingham, UK, the scientists observed that in lymph node regions called interfollicular zones, ILC3s are in close association with a specific type of T cell, called RORγt+ regulatory T cells (Tregs), which are adapted to dial down inflammation and immune activity to promote tolerance in the gut.

“We previously defined key roles for ILC3s in regulating adaptive immunity, but these findings are exciting as they provoke a concept that ILC3s directly interact with Tregs to control immune tolerance in the gut,” said Dr. David R. Withers, professor of immune regulation at the Institute of Immunology and Immunotherapy and the University of Birmingham.  Dr. Withers and his laboratory are key contributors to this study and long-term collaborators of Dr. Sonnenberg.

The researchers next found evidence that ILC3s play an essential role in promoting the RORγt+Treg population in the gut. Much like how immune responses are generated to disease-causing microbes, the ILC3s present pieces of gut-dwelling microbes; but this elicited RORγt+ Tregs that specifically recognize these microbes rather than an inflammatory immune response. These RORγt+ Tregs then suppress other T cell responses and enforce tolerance to the microbiota.

The scientists found that when they deleted the surface molecule, MHC class II, that ILC3s use to present microbial antigens, thus impeding ILC3s’ interactions with RORγt+ Tregs, the observed RORγt+ Tregs were substantially lower than in normal mice, and the affected mice developed spontaneous gut inflammation. At the same time, inflammatory RORγt+ T cells, called T helper (Th)17 cells, were dramatically increased in these mice—in part because many Tregs, bereft of the usual signals from their ILC3 helpers, turned into Th17 cells.

“Our extensive research reveals that ILC3s are necessary and sufficient enforcers of immune tolerance to gut microbes,” Dr. Lyu said. “In addition, we now have a sophisticated understanding of the signals that ILC3s use to communicate with T cells and drive the generation of microbiota-specific Tregs.”

To confirm the potential relevance to humans, the researchers analyzed samples of inflamed gut tissue from pediatric IBD patients or healthy individuals in close collaboration with Dr. Robbyn E. Sockolow, professor of clinical pediatrics and chief of the division of Pediatric Gastroenterology, Hepatology and Nutrition in the Department of Pediatrics at Weill Cornell Medicine and a pediatric gastroenterologist at NewYork-Presbyterian Komansky Children's Hospital and Center for Advanced Digestive Care. With Dr. Socklolow and the Roberts Institute Live Cell Bank, they found evidence that communication between ILC3s and RORγt+Tregs is disrupted in IBD patients.

“Our exciting results provide a potential explanation for why immune tolerance is impaired in IBD patients, which could provoke new therapies with the goal of re-educating the immune system to limit chronic inflammation directed against the microbiota,” Dr. Sockolow said.

Dr. Sonnenberg and colleagues now are trying to determine how the ILC3-T cell tolerance mechanism distinguishes between symbiotic, helpful microbes and disease-causing ones. But the results so far suggest, that future cell therapies to restore ILC3 functionality might have powerful effects in suppressing inflammation in IBD. Further, it remains possible that this pathway could be harnessed to limit other inflammatory and autoimmune disorders, as recently demonstrated by the Sonnenberg Lab in mouse models of multiple sclerosis.

“The fact that the ILC3s are essential to orchestrate tolerance by promoting antigen-specific Tregs is particularly important,” Dr. Sonnenberg notes, “for it suggests the possibility of highly targeted treatments that can precisely suppress a source of inappropriate immune activity without compromising immunity as a whole.”

Research in the Sonnenberg Laboratory is supported by the National Institutes of Health (R01AI143842, R01AI123368, R01AI145989, U01AI095608, R21CA249274, R01AI162936 and R01CA274534); an Investigators in the Pathogenesis of Infectious Disease Award from the Burroughs Wellcome Fund; the Meyer Cancer Center Collaborative Research Initiative; The Dalton Family Foundation; the Crohn’s and Colitis Foundation; and Linda and Glenn Greenberg. Dr. Sonnenberg is a CRI Lloyd J. Old STAR. The JRI IBD Live Cell Bank is supported by the JRI, Jill Roberts Center for IBD, Cure for IBD, the Rosanne H. Silbermann Foundation, the Sanders Family and Weill Cornell Medicine Division of Pediatric Gastroenterology, Hepatology, and Nutrition.