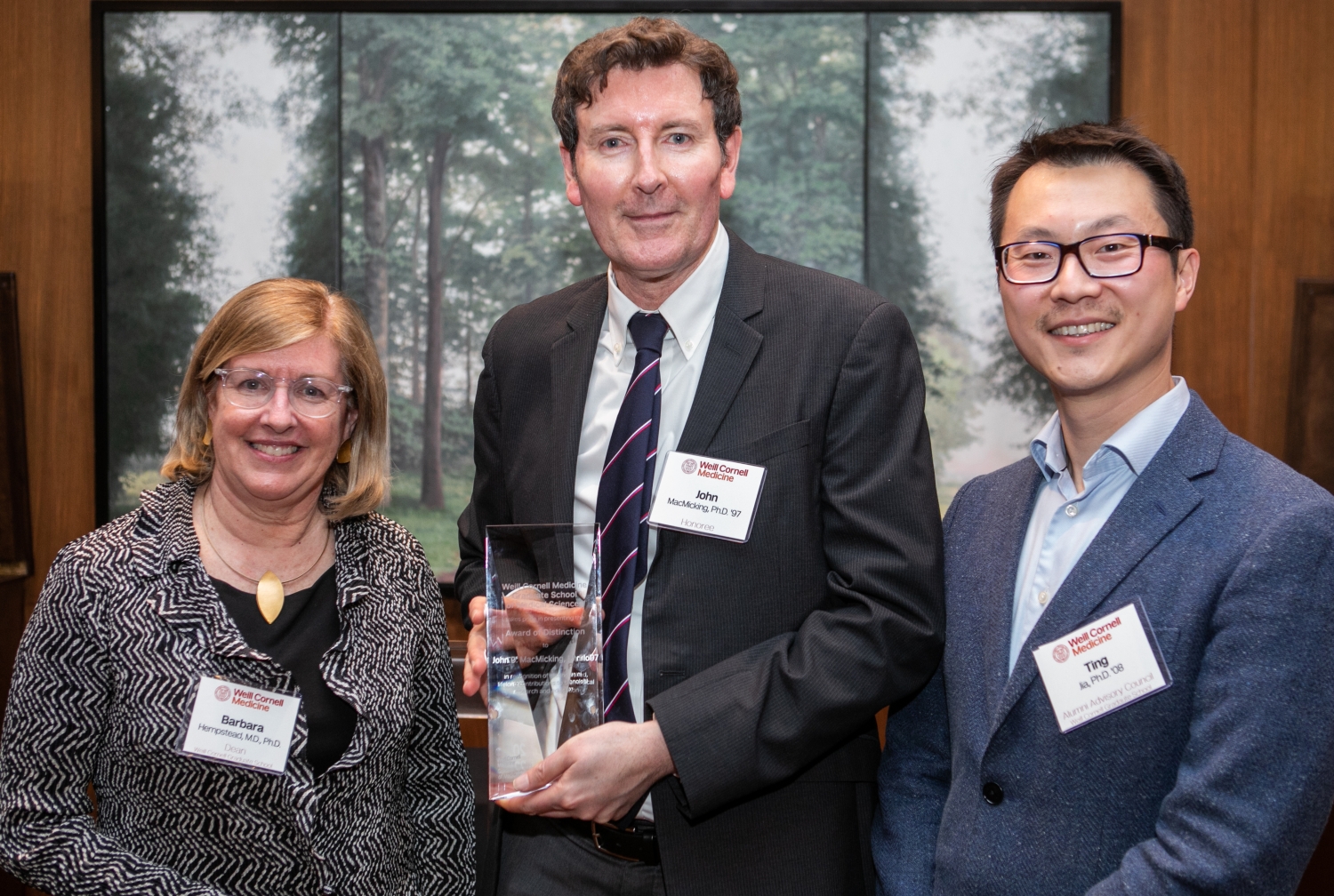 Dr. John MacMicking, a Howard Hughes Medical Institute Investigator and professor of immunobiology and microbial pathogenesis at Yale University School of Medicine, has been awarded the 2022 Graduate School of Medical Sciences Alumni Award of Distinction.

Since 1997, graduate school alumni have been recognized with this award for their outstanding contributions to biomedical research in education, focusing on science and scholarship, leadership, mentoring and teaching, and service to society.

Dr. MacMicking, who earned his doctorate from the Weill Cornell Graduate School of Medical Sciences in 1997, was honored May 18 at the 2022 Alumni Award of Distinction dinner and will receive his award during Weill Cornell Medicine’s Commencement ceremony on May 19.

“It’s a privilege to be chosen as a recipient of this award,” Dr. MacMicking said. “It reflects the educational experience I had when I was at Weill Cornell many years ago. It provided the foundation – in terms of intellectual pursuit and rigor – to launch my career and fulfill the goal of a scientist to do impactful work.”

Born and raised in Australia, Dr. MacMicking had never been to the United States before starting graduate school in 1991.

“I initially stayed with friends living on the promenade in Brooklyn Heights and my first week was spent looking across the water at lower Manhattan,” Dr. MacMicking said. “It was a fairy tale type of entry into New York, and I’ll always be grateful for it.”

Prior to coming to Weill Cornell, Dr. MacMicking studied synthetic organic chemistry and biochemistry at the Australian National University. He then chose to pursue his doctorate under the guidance of Dr. Carl Nathan, chairman of the Department of Microbiology and Immunology and the R.A. Rees Pritchett Professor of Microbiology at Weill Cornell Medicine.

“I'd read a lot of Carl’s work prior to coming to New York and had already been in contact with him, and I was just very impressed by the breadth and quality of the science,” he said. “It turned out to be a wonderful six years under his tutelage. He’s one of the true giants of immunity and host defense over the past 50 years.”

Dr. MacMicking was selected as a Howard Hughes Medical Institute Life Science Research Foundation Fellow to conduct post-doctoral work at The Rockefeller University. He remained an adjunct assistant professor at Rockefeller when he joined Yale in 2004. At Yale, his research focuses on cell-autonomous immunity, including the biological question of how all nucleated cells, irrespective of tissue origin, protect themselves against infection.