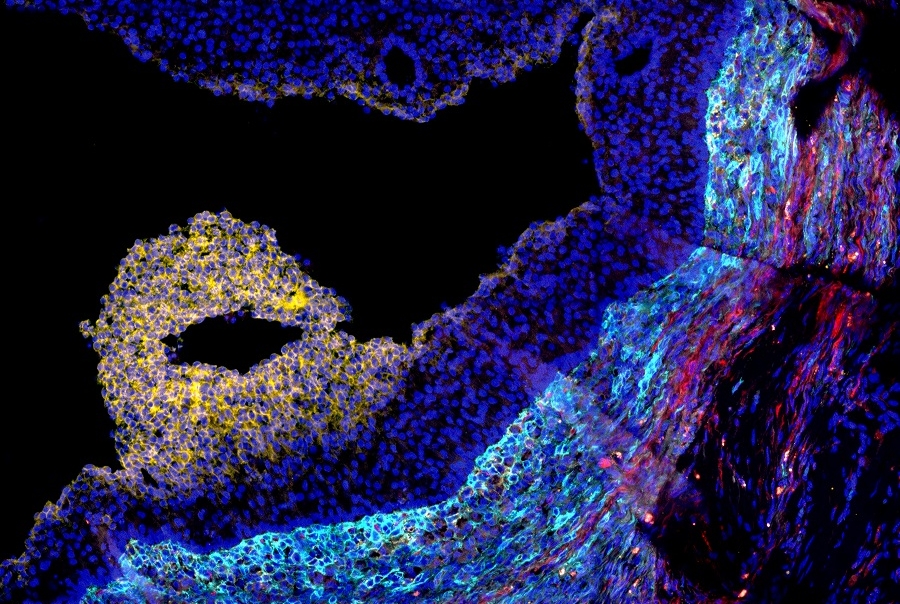 Image of an ovarian follicle at the advanced “antral” growth stage with multiple associated cell types highlighted. The oocyte is contained within the cells making up the cumulus-oocyte-complex (yellow); cyan marks the theca interna cells that mediate metabolism of the growing follicle; and red identifies general ovarian stromal cells; all nuclei are dark blue. Image courtesy of Dr. Daylon James.

High levels of anti-Mullerian hormone (AMH) have traditionally been thought of as merely a passive byproduct of polycystic ovary syndrome (PCOS), but a new preclinical study by Weill Cornell Medicine researchers suggests that the hormone plays an active role in the disorder and may contribute to problems with ovulation and fertility.

In the study, published March 9 in Science Advances, the investigators discovered that AMH may cause follicles, the multicellular, fluid-filled sacs that contain developing eggs in the ovary, to mature too quickly.

“AMH is routinely measured in the clinic to give an indication of how many follicles a woman has growing in her ovaries, and this value is often high in women with PCOS. But no one has ever determined whether a high level of AMH, by itself, can have a negative influence,” said senior author Dr. Daylon James, assistant professor of stem cell biology in obstetrics and gynecology and in reproductive medicine at Weill Cornell Medicine. “A better understanding of the root causes of PCOS is critical to mitigating the condition’s many health consequences.”

Developing eggs, called oocytes, are produced in the ovaries within follicles, which support their growth. As the follicle grows, the egg that resides within it gradually matures, and in a normal reproductive cycle, that follicle ultimately undergoes ovulation to release an egg capable of being fertilized. However, in patients with PCOS, a hormonal disorder that impacts up to 10 percent of women, the ovaries contain numerous smaller follicles that produce AMH, but fail to progress to later stages and ovulate.

While fertility treatments can help with conception, women with PCOS contend with a variety of other symptoms, said Dr. James. For example, PCOS is often accompanied by hyperandrogenism, or high levels of hormones such as testosterone that are collectively called androgens. An overabundance of these hormones can cause an array of secondary complications, including unwanted growth of body and facial hair. Women with PCOS can also be prone to diabetes and metabolic disease and are more susceptible to endometrial cancer.

Dr. James and his research team hypothesized that AMH is directly contributing to at least some of the constellation of symptoms associated with the disorder. To isolate the effects of AMH, the researchers utilized a xenograft system in which ovarian tissue from human organ donors is engrafted onto the flank of immunocompromised mice. One group of mice was transplanted along with cells that continuously supplied AMH directly to the grafted tissue, and the other group of mice was transplanted with control cells without AMH.

“What we have here is a unique opportunity to take tissue from the same human donors and allocate it to both experimental groups—the group with AMH and the group without AMH,” said first author Dr. Limor Man, assistant professor of research in obstetrics and gynecology and in reproductive medicine, and the Hung-Ching Liu Research Scholar in obstetrics and gynecology. “This is actually the best control you can hope for in these types of experiments.”

By contrast, when researchers compare patients with PCOS to those without the disorder in clinical studies, a variety of influencing factors, such as genetic predispositions and varying levels of different reproductive hormones, must be considered, she said.

The researchers discovered that the ovarian tissue exposed to high AMH contained follicles that showed characteristics evident at a much later stage of development. Specifically, the follicles were undergoing luteinization, a process that occurs immediately leading up to ovulation, before any of the oocytes were ready.

“AMH is causing the usually coordinated growth process between a follicle and its resident oocyte to fall out of synch,” said Dr. James, who is also the Queenie Victorina Neri Research Scholar in obstetrics and gynecology and assistant professor of genetic medicine at Weill Cornell Medicine. “It is like baking with the oven too hot,” he said. “The outside, or the cellular component of the follicle, is overcooked, while the inside, or oocyte, is not done.”

“Based on ultrasounds showing persistent presence of multiple small follicles in the ovary, infertility in women with PCOS has been attributed to stalled growth and resultant failure in egg maturation,” Dr. Man said. “But recent data indicates that “stalled” follicles in these patients are actually a steady stream of newly growing, but abortive follicles.”

This new study puts forth the revised interpretation that the persistent array of small follicles in PCOS ovaries represent a continuous succession of follicles undergoing rushed maturation and failure to ovulate.

Considering the broad prevalence of PCOS, the factors that contribute to its emergence remain poorly understood. Although treatments exist for individual facets of disease, the condition rarely recedes until women reach the end of their reproductive lifespan. The identification of a novel AMH-driven mechanism for failed follicle development suggests that it can contribute to this, and perhaps other, facets of PCOS disease symptoms.

“With further research, we hope to develop drug treatments that target the effects of AMH, which could help restore the menstrual cycle in women with PCOS and manage other symptoms of the condition,” Dr. James said.