Structural and Functional Alignment in the Brain Linked to Age, Sex and Cognition 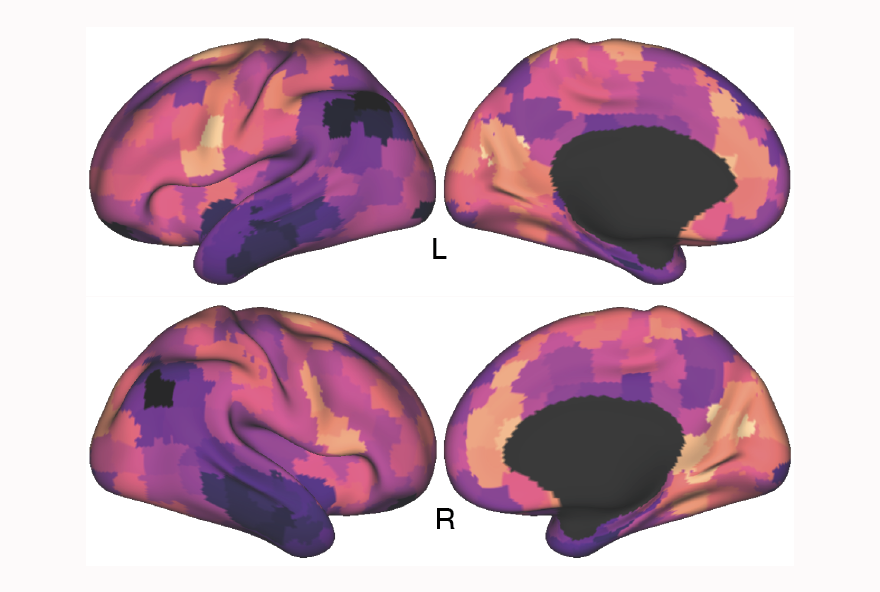 Structure-function coupling varies across the brain: The color of each brain region corresponds to the strength of the alignment of that region’s anatomical wiring and patterns of activity, where lighter means more alignment and darker means less alignment. Image courtesy of Dr. Amy Kuceyeski.

The degree to which the brain’s wiring aligns with its patterns of activity can vary with sex and age, and may be genetic, suggests a study published by Weill Cornell Medicine investigators. The study finds that this alignment may also have implications on cognition.

The results published July 12 in Nature Communications help shed light on one of the biggest mysteries in biology—how the brain works, according to senior author Dr. Amy Kuceyeski, associate professor of mathematics in the Department of Radiology and in neuroscience in the Feil Family Brain and Mind Research Institute at Weill Cornell Medicine. Specifically, the study is a first step towards understanding the relationship between the physical wiring in the brain and its flow of activity.

“Things as basic as how anatomy and physiology in the brain align are not understood in humans,” said Dr. Kuceyeski, who leads the Computational Connectomics Laboratory in the Department of Radiology at Weill Cornell Medicine. “If we want to be able to effectively treat neurological or neuropsychiatric diseases, we need to understand how brain structure and function interact.”

To begin to unravel this mystery, first author Zijin Gu, a doctoral student in the field of electrical and computer engineering based at Cornell’s Ithaca campus and a member of the Computational Connectomics Laboratory, analyzed data from 941 young, healthy adults participating in the Human Connectome Project. The Human Connectome Project is a massive endeavor led by the National Institutes of Health to map all the pathways involved in human brain function.

Gu used magnetic resonance imaging (MRI) data, to examine the brain’s “wiring,” or bundles of myelinated axons, that transmit electrical signals. Then she compared that with resting-state functional MRI data, which detects brain activity patterns and can shed light on how different brain regions are working together when a person is just sitting in the MRI scanner. Using these tools, Gu showed that the relationship between brain wiring (aka structural connectivity) and brain co-activation (aka functional connectivity) varied in different parts of the brain. Structural and functional connectivity she found were most closely aligned in the parts of the brain involved in processing visual information and the subcortical areas of the brain involved in activities like memory and emotion. But there was less alignment between brain structure and function in brain’s limbic system, which controls things like hunger and the fight or flight response, and the cerebellum, which coordinates movement.

The degree of alignment between the physical structure of the brain in these regions and their activity varied among individuals and was more similar among related individuals in the study, such as siblings or twins. Specifically, tight alignment between the structural wiring and functional activity of the subcortical areas and cerebellum appeared to have a strong genetic component with close similarities between people who were related.

The degree of connectivity in different brain regions also was associated with people’s age, sex and their performance on cognitive tests.

These sex differences may help explain why males and females often experience distinct symptoms with brain conditions like autism or ADHD, Dr. Kuceyeski explained. “If there are sex differences in the structural and functional alignment in the brain, that may give us clues about why behavior or symptoms vary among males and females with some atypical brain development,” she said.

The team, which also included Dr. Keith Jamison, a research associate in the Computational Connectomics Laboratory, and Dr. Mert Sabuncu, associate professor of electrical and computer engineering in the College of Engineering at Cornell and in radiology at Weill Cornell Medicine, plans to next analyze data on children, adolescents and older adult participants in the Human Connectome Project to learn more about the relationship between brain structure and function over the lifespan. They also plan to “build a brain model in a box” using mathematical modeling and machine learning to recreate some of the patterns they’ve detailed in this study.

“This study is really a first step in understanding the structural and functional alignment of the human brain,” Dr. Kuceyeski said. “We can use this information to try to identify changes that occur as a result of brain disease, which might help guide the development of new therapies.”