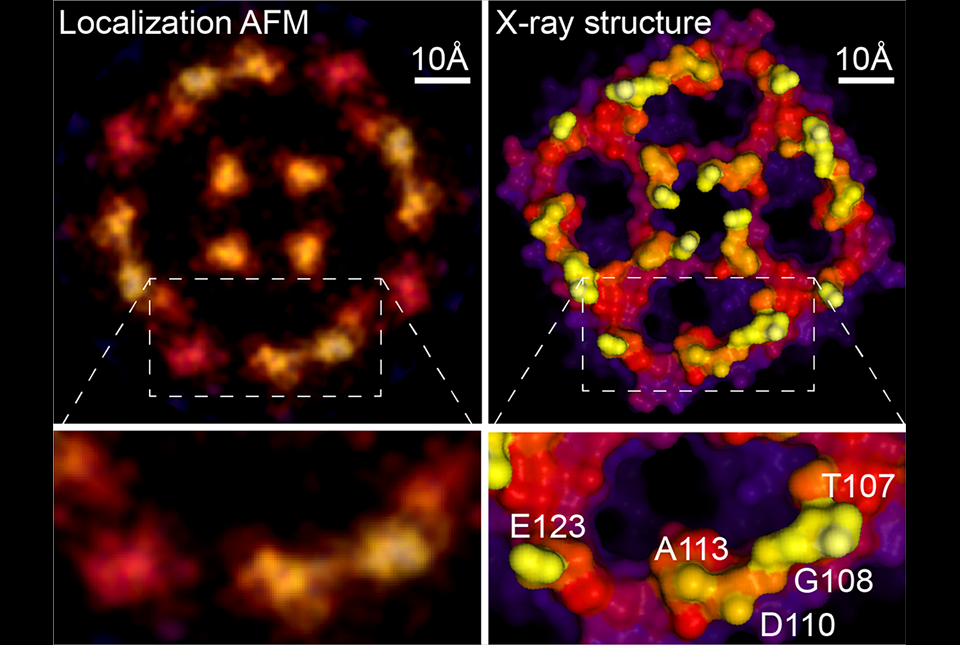 Click on the image to view a video about the paper.

Scientists at Weill Cornell Medicine have developed a computational technique that greatly increases the resolution of atomic force microscopy, a specialized type of microscope that “feels” the atoms at a surface. The method reveals atomic-level details on proteins and other biological structures under normal physiological conditions, opening a new window on cell biology, virology and other microscopic processes.

In a study, published June 16 in Nature, the investigators describe the new technique, which is based on a strategy used to improve resolution in light microscopy.

To study proteins and other biomolecules at high resolution, investigators have long relied on two techniques: X-ray crystallography and cryo-electron microscopy. While both methods can determine molecular structures down to the resolution of individual atoms, they do so on molecules that are either scaffolded into crystals or frozen at ultra-cold temperatures, possibly altering them from their normal physiological shapes. Atomic force microscopy (AFM) can analyze biological molecules under normal physiological conditions, but the resulting images have been blurry and low resolution.

"Atomic force microscopy can easily resolve atoms in physics, on solid surfaces of silicates and on semiconductors, so it means that in principle the machine has the precision to do that," said senior author Dr. Simon Scheuring, professor of physiology and biophysics in anesthesiology at Weill Cornell Medicine. “The technique is a bit like if you were to take a pen and scan over the Rocky Mountains, so that you get a topographic map of the object. In reality, our pen is a needle that is sharp down to a few atoms and the objects are single protein molecules."

However, biological molecules have many small parts that wiggle, blurring their AFM images. To address that problem, Dr. Scheuring and his colleagues adapted a concept from light microscopy called super-resolution microscopy. "Theoretically it wasn't possible by optical microscopy to resolve two fluorescent molecules that were closer together than half the wavelength of the light,” he said. However, by stimulating the adjacent molecules to fluoresce at different times, microscopists can analyze the spread of each molecule and pinpoint their locations with high precision.

Instead of stimulating fluorescence, Dr. Scheuring's team noted that the natural fluctuations of biological molecules recorded over the course of AFM scans yield similar spreads of positional data. First author Dr. George Heath, who was a postdoctoral associate at Weill Cornell Medicine at the time of the study and is now a faculty member at the University of Leeds, engaged in cycles of experiments and computational simulations to understand the AFM imaging process in greater detail and extract the maximum of information from the atomic interactions between tip and sample.

Using a method like super-resolution analysis, they were able to extract much higher resolution images of the moving molecules. Continuing the topographic analogy, Dr. Scheuring explained that "if the rocks (i.e., atoms) wiggle a little bit up and down, you can detect this one, then that one, and then you average all detections over time and you receive high-resolution information."

Because previous AFM studies have routinely collected the necessary data, the new technique can be applied retroactively to the blurry images the field has generated for decades. As an example, the new paper includes an analysis of an AFM scan of an aquaporin membrane protein, originally acquired during Dr. Scheuring's doctoral thesis. The reanalysis generated a much sharper image that matches X-ray crystallography structures of the molecule closely. "You basically get quasi-atomic resolution on these surfaces now," said Dr. Scheuring. To showcase the power of the method, the authors provide new high-resolution data on annexin, a protein involved in cell membrane repair, and on a proton-chloride antiporter of which they also report structural changes related to its functional.

Besides allowing researchers to study biological molecules under physiologically relevant conditions, the new method has other advantages. For example, X-ray crystallography and cryo-electron microscopy rely on averaging data from large numbers of molecules, but AFM can generate images of single molecules. "Instead of having observations of hundreds of molecules, we observe one molecule a hundred times and calculate a high-resolution map," said Dr. Scheuring.

Imaging individual molecules as they carry out their functions could open entirely new types of analysis. "Let's say you have a [viral] spike protein that's in one conformation and then it gets activated and goes into another conformation,” said Dr. Scheuring. “You would in principle be able to calculate a high-resolution map from that same molecule as it transits from one conformation to the next, not from thousands of molecules in one or the other conformation." Such high-resolution single molecule data could provide more detailed information and avoid the potentially misleading results that can occur when averaging data from many molecules. Furthermore, the map might reveal new strategies for precisely redirecting or interrupting such processes.