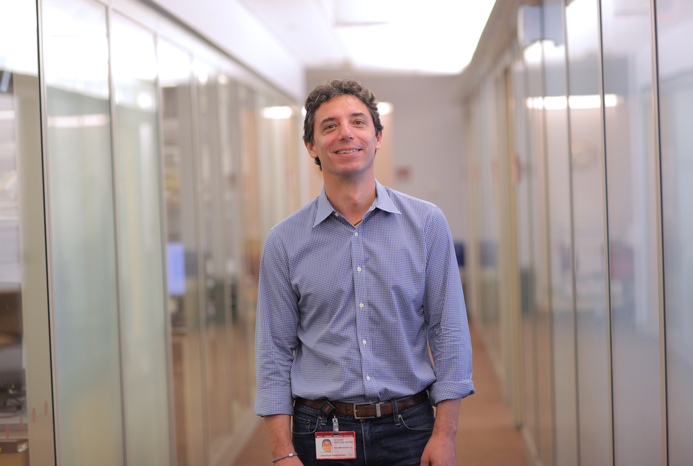 Dr. Giovanni Manfredi, the Finbar and Marianne Kenny Professor in Clinical and Research Neurology at Weill Cornell Medicine’s Feil Family Brain and Mind Research Institute, has received an Outstanding Investigator Award (R35) from the National Institutes of Health’s National Institute of Neurological Disorders and Stroke (NINDS) to study the role of mitochondrial dysfunction in brain disease.

The highly competitive award provides long-term support and flexibility for an investigator to pursue an ambitious research agenda. The award will provide about $1.1 million a year in direct and indirect costs, over up to eight years. In addition to recognizing Dr. Manfredi’s scientific accomplishments, the award reflects his commitment to mentorship and training of young investigators.

The funding will help Dr. Manfredi’s laboratory investigate the role that dysfunctional mitochondria play in degenerative disease of the brain such as Alzheimer’s disease, Parkinson’s disease and amyotrophic lateral sclerosis (ALS). His discoveries could pave the way to innovative treatments for these devastating and difficult to treat diseases.

“I’m very honored to have been recognized for my work and my ideas, as well as my contributions to the scientific community,” said Dr. Manfredi, who also directs the neuroscience program at the Weill Cornell Graduate School of Medical Sciences. “We are striving to develop a mitochondrial therapy that would significantly change the course of these diseases.”

Mitochondria supply cells with energy and are especially important in energy hungry organs like the brain, Dr. Manfredi said. In some cases, mitochondria dysfunction is caused by inherited genetic disorders that trigger severe and often fatal brain degeneration. In others it may be caused by disease-related stress, like the build-up of toxic beta-amyloid plaques in Alzheimer disease, damaging the mitochondria.

Dr. Manfredi and his colleagues demonstrated in a paper in Acta Neuropathologica that in mice with an ALS-like condition the mitochondria in muscles are damaged, triggering a mitochondrial integrated stress response. Under stress, the mitochondria send messages to the cell nucleus telling it to switch to alternate pathways for energy production and metabolism.

“The cells are trying to adjust to a shortage of energy, but this adaptation becomes maladaptive over time,” Dr. Manfredi said. “It damages the cells even further.”

The Outstanding Investigator Award will allow Dr. Manfredi to study the role of the mitochondrial integrated stress response in both inherited mitochondrial brain diseases and in neurodegenerative diseases that occur later in life like Alzheimer’s disease, amyotrophic lateral sclerosis, or Parkinson’s disease.

“We want to see how mitochondrial damage progresses in brain disease and if we can interfere with the mitochondrial integrated stress response to break the vicious cycle of cell damage,” he said.

One potential way to help blunt the damage caused by the mitochondrial integrated stress would be to supplement an individual’s diet with nutrients that are being depleted. Dr. Manfredi said he and his colleagues will test this approach in mice with conditions that mimic inherited or neurodegenerative brain diseases. They will also use human induced pluripotent stem cells, which are adult cells coaxed into an undifferentiated state that can be grown into brain cells and tissue in the laboratory. They also plan to develop biomarkers that can be used to measure whether a nutritional supplement or other therapy is having the desired effect.