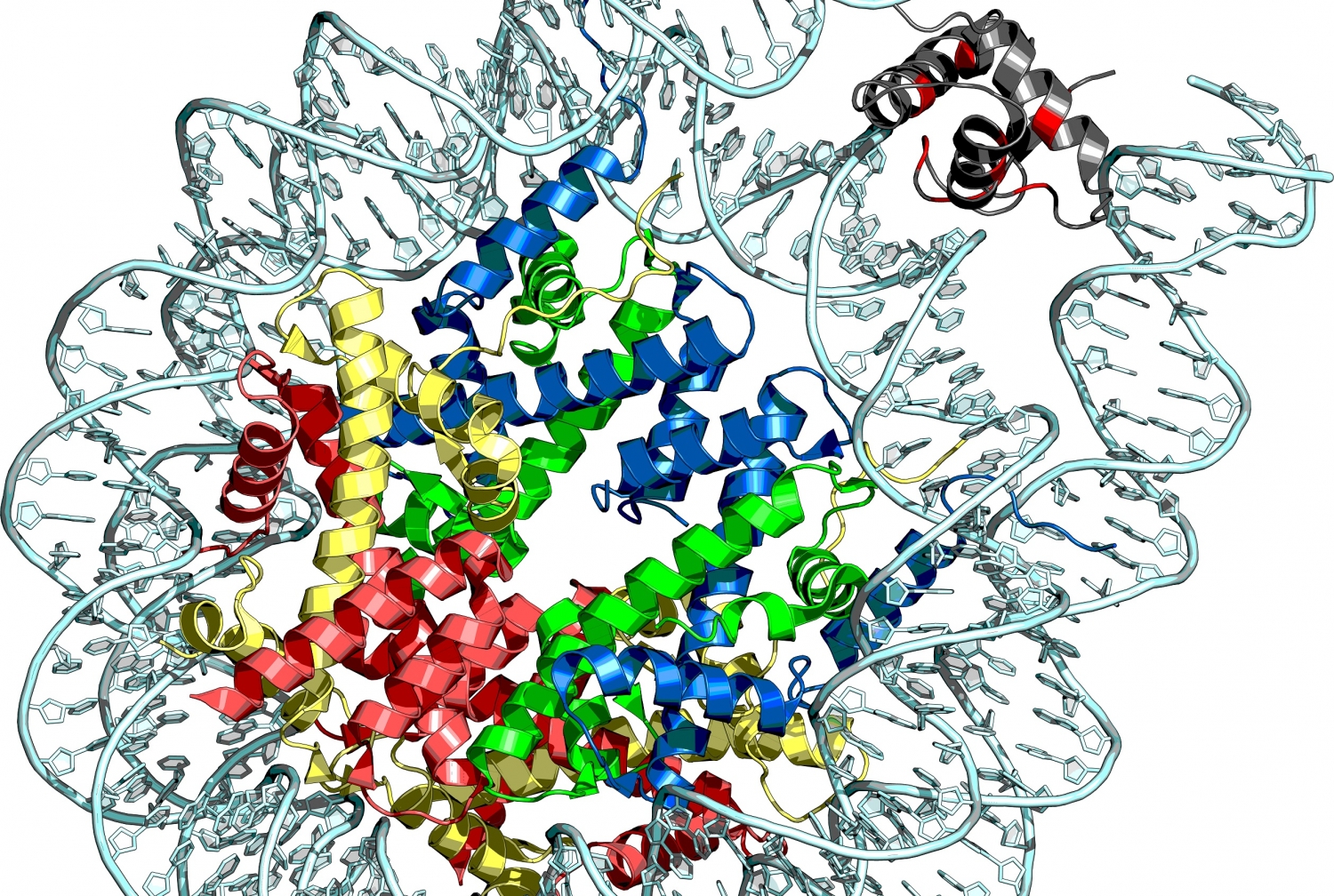 Histone H1 (fragment shown here in gray) binds and condenses DNA to repress gene activity. Mutations in histone H1 (highlighted in red) have been identified at high frequency in many hematological malignancies.

Mutations in proteins called histone H1, which help package DNA in chromosomes, are a frequent cause of lymphomas, according to a study led by researchers at Weill Cornell Medicine, NewYork-Presbyterian and The Rockefeller University. The findings could lead to new approaches to treating these cancers.

Scientists in recent years have observed that mutations in histone H1 genes occur in lymphomas, but they have not known whether these mutations are causes or effects of malignancy. The study, which appears Dec. 9 in Nature, reveals that certain histone H1 mutations are indeed drivers of lymphoma, and promote these cancers by loosening areas of DNA that are normally tightly wrapped. This loosening allows aberrant expression of early development genes that are normally completely shut down in the mature lymphocytes from which lymphomas derive.

“It’s a very interesting set of findings that give us insights into the origins of lymphomas as well as the important role of histone H1 proteins in the maturation of cells,” said co-senior author Dr. Ari Melnick, the Gebroe Family Professor of Hematology and Medical Oncology and a member of the Sandra and Edward Meyer Cancer Center at Weill Cornell Medicine.

The other co-senior authors on the study were Dr. Ethel Cesarman, a professor of pathology and laboratory medicine at Weill Cornell Medicine and a pathologist at NewYork-Presbyterian/Weill Cornell Medical Center, and Dr. Alexey Soshnev, a postdoctoral associate in the laboratory of Dr. David Allis, the Joy and Jack Fishman Professor at The Rockefeller University.

Lymphomas are relatively common cancers. Each year around 85,000 people in the United States are diagnosed with them, and more than 20,000 people die of them. Most lymphomas arise from immune cells called B cells, which make antibodies.

B cells in a brief stage of their life cycle gather at sites called germinal centers in the lymph nodes and spleen, and undergo DNA mutation at a relatively high rate. This is part of an evolutionary strategy by which B cells develop a stronger fit between the antibodies they make and the viruses or other targets to which the antibodies bind. A drawback of this increased mutability is that it makes germinal center B cells much more likely to develop cancer-driving mutations—and indeed most B cell lymphomas arise from B cells that are in this special, mutable state. However, scientists have not fully understood which specific mutations turn these B cells cancerous.

Several years ago, genomic studies on lymphoma by Dr. Melnick and Dr. Cesarman and their teams began to uncover histone H1 mutations in these cancers. Soon other researchers were observing them too. These studies ultimately would reveal that histone H1 mutations are quite frequent in lymphomas—being present, for example, in about half of Hodgkin lymphomas and 30 to 40 percent of the more common diffuse large B-cell lymphomas (DLBCLs).

But are these H1 mutations causal “drivers” of lymphoma, or just “passenger” mutations occurring in the background without impact on cancerous growth?

“In general, people doing lymphoma genomics studies at that time were not making a big deal out of these H1 mutations,” said Dr. Cesarman, who is also a member of the Sandra and Edward Meyer Cancer Center.

She and Dr. Melnick, however, teamed up with Dr. Allis’s laboratory, which has special expertise in histone proteins, to win a Starr Cancer Consortium grant to study H1’s role in lymphomas.

In a statistical analysis, the collaborating researchers analyzed and compared the frequency of H1 mutations along with other gene mutations in a set of 101 DLBCL cases. There are five distinct forms of H1 that work in dividing cells, and the researchers concluded that mutations in two of these, H1C and H1E, are common driver mutations for these lymphomas.

How do these mutations drive cancerous changes in cells? The researchers confronted significant challenges when trying to answer this basic question. For example, mice engineered to lack H1C and/or H1E grow up normally. Eventually a close study of the mice’s B cells turned up the crucial clue.

“We were able to look into the biology specifically of germinal center B cells, and that’s when we saw the changes,” said first author Nevin Yusufova, a Ph.D. candidate who divided her time between Dr. Melnick’s and Dr. Cesarman’s lab during the study.

The germinal center B cells, but not other B cells in the mice, were proliferating more rapidly than they did in unaltered mice. Ultimately, with further cell culture experiments and the development of a new mouse model, the researchers figured out the basics of how these H1 mutations can drive lymphomas.

Histone proteins generally are involved in spooling and packaging DNA into a structure that is often called “beads on a string.” The specific function of histone H1 proteins has been somewhat obscure, though scientists have known that they sit atop the beads-on-a-string-structure and help keep it tightly wound. The lymphoma-associated H1 mutations, the researchers found, disrupt these histone proteins’ abilities to bind and tighten DNA—allowing the DNA to become “decompacted.” Consequently, genes that would otherwise be suppressed become active, and these include genes that normally are at work only in stem cells and other immature cells during the earliest, high-growth stages of life.

“The H1 proteins essentially function to keep these stem-cell genes, which are no longer needed, in long-term storage—and when that storage function is lost, the genes can become inappropriately active again,” said Dr. Melnick, who has been a paid consultant for Epizyme and Constellation, and is on the advisory board for KDAC Pharma.

All this appears to be particularly important in germinal center B cells, which already are capable of relatively high rates of proliferation, the researchers noted.

The team now plans to follow up with further investigations, for example to determine which unleashed stem cell genes are most important for cancerous transformation in H1-mutation lymphomas—and how these lymphomas might be targeted with future treatments. The research will occur largely under a working group collaboration including the Weill Cornell Medicine researchers and colleagues from The Rockefeller University, New York University, Albert Einstein College of Medicine and Memorial Sloan Kettering Cancer Center.