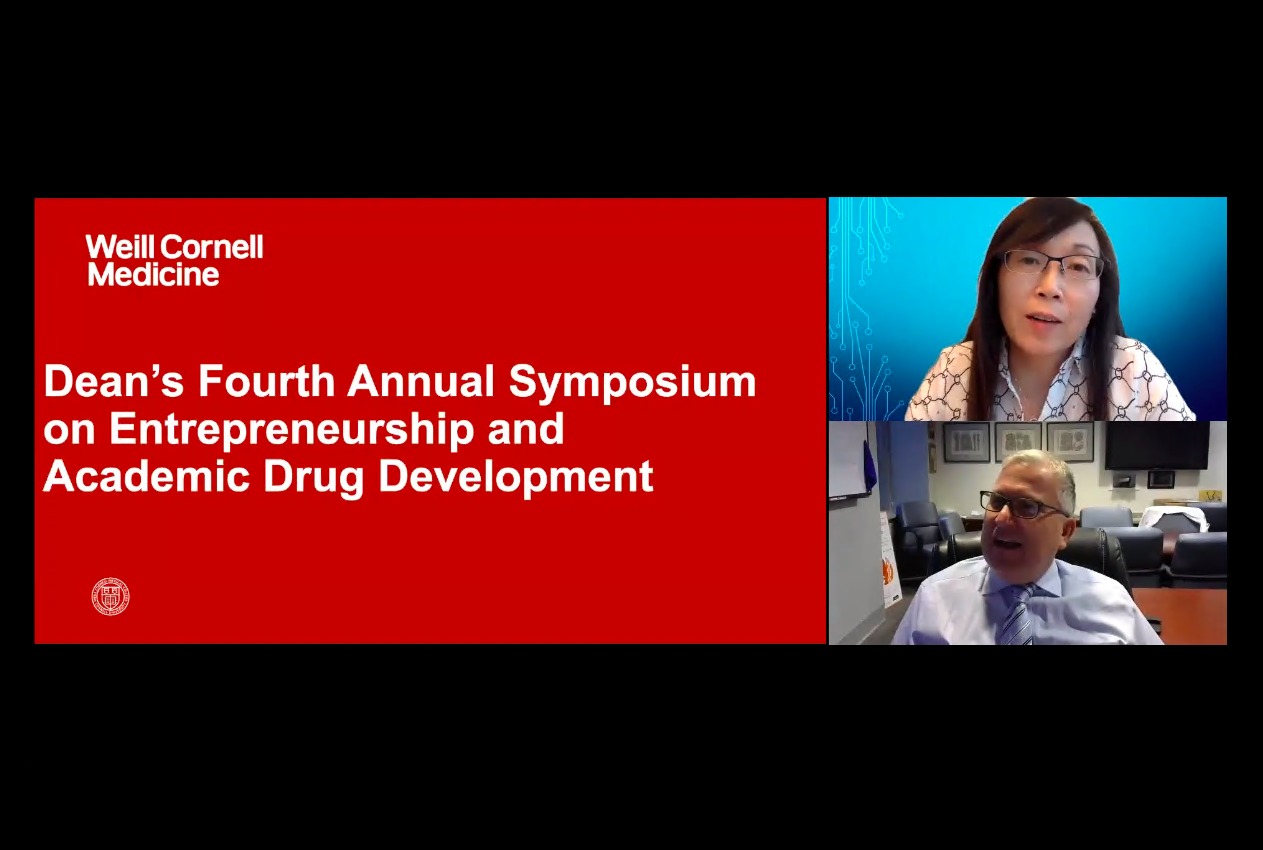 Weill Cornell Medicine neuroscientist Dr. Li Gan is driving toward one of the most coveted medical breakthroughs: an effective treatment for Alzheimer’s disease.

A growing global epidemic, Alzheimer’s is projected to affect 14 million people by 2050 if no cure or preventive is devised by then. It’s a daunting task, exacerbated by the failure of a once-promising therapeutic strategy targeting the buildup of the amyloid beta protein in the brain—a hallmark of the disease. Not discouraged, Dr. Gan has instead devised an innovative two-pronged therapeutic approach that has so far shown promise in mice. Now, with the support of several Weill Cornell Medicine entrepreneurship programs and the creation of her startup Aeton Therapeutics, Dr. Gan is working to take her pre-clinical therapy into the next stage of drug development.

“The entrepreneurship ecosystem here has really enabled us to take the steps from discovery at the lab bench towards the development of new therapeutics,” said Dr. Gan, director of the Helen and Robert Appel Alzheimer’s Disease Research Institute at Weill Cornell Medicine, Oct. 22 during the institution’s fourth annual Dean’s Symposium on Entrepreneurship and Academic Drug Development.

The symposium, held virtually this year amid the ongoing COVID-19 pandemic and attended by some 125 people, served as an urgent, ever-present reminder of the importance of biomedical innovation and how Weill Cornell Medicine’s entrepreneurship ecosystem can support that work.

“It all starts with our faculty, and in some cases our students and trainees, having ideas—having discoveries,” said Dr. John Leonard, the newly appointed senior associate dean for innovation and initiatives, and the Richard T. Silver Distinguished Professor of Hematology and Medical Oncology at Weill Cornell Medicine. “They can then work with our teams to organize patent protection, as well as financial support, industry backing and translational expertise to move their projects forward toward the clinic.”

Weill Cornell Medicine researchers who need advice and support for patent protection and patent licensing can consult the Center for Technology Licensing (CTL), a shared office with Cornell’s Ithaca campus. Those seeking connections with potential investors or industry sponsors or collaborators can engage with the Office of Biopharma Alliances—which also manages a funding source for early-stage translational science, known as the Daedalus Fund for Innovation.

The revenue from research under these translation-oriented organizations has increased dramatically over the past five years, Dr. Leonard said.

He also noted that a primary focus for his team will be to make the resources of the Weill Cornell innovation ecosystem even more visible to faculty and easier to access, especially through the creation of Office of Entrepreneurship. “Ultimately we want to make all this more clear, more streamlined, so that people can know better where to go and get the expertise and the resources they need, depending on their type of project and its stage of development,” he said.

The office, said Dr. Augustine M.K. Choi, the Stephen and Suzanne Weiss Dean of Weill Cornell Medicine, will serve as “a virtual front door” for the institution’s innovation network.

“By expanding and centralizing our infrastructure, we hope to make the commercialization process easier, more efficient, more user friendly and easier to navigate, in order to increase our collaborations with industry at all stages, and ultimately to maximize the impact we have on our patients,” he said.

Keynote speaker Dr. John Maraganore, CEO of Alnylam Pharmaceuticals, recounted how the long and winding research road leading to the success of his multibillion-dollar company, with patented drugs being marketed around the world and a pipeline of candidate therapies in clinical trials, began with an initially obscure scientific discovery in 1990.

Researchers in Arizona and Australia were trying to engineer a petunia more purple in color by adding a modified version of the purple pigment gene. To their surprise, expression of the modified gene made petunias whiter by somehow shutting down expression of the normal purple pigment gene. Eight years later, another team of scientists, who would win the Nobel Prize for the discovery, figured out how this “RNA interference” (RNAi) worked. A third team made RNAi work in mammalian cells in 2002, and that led to the founding of Alnylam.

Dr. Maraganore, who has been CEO of Alnylam from its inception, discussed how academic scientists can engage with such a company. Alnylam was founded in part by academic scientists excited about the prospect of RNAi therapeutics that could shut off disease-causing genes. Those scientists continued as advisers in the company’s earliest days, and now Alnylam maintains a large advisory board including basic scientists and clinical researchers. The company over the years has also had thousands of collaborations or consulting arrangements with academic investigators involving drug delivery technologies and clinical trials; and has licensed intellectual property from numerous academic labs.

In discussing his own career path from academic scientist to biotech researcher and executive, Dr. Maraganore underlined one of the key “cultural transitions” that academics face in forming startups or otherwise moving to industry: the need to “switch from focusing on individual lab-based achievements to team-based achievements across the company.”

Dr. Gan’s startup, Aeton Therapeutics, is striving to develop a treatment for Alzheimer’s, something that has eluded researchers for decades. Rather than focusing on amyloid beta—which scientists now believe may trigger the initial disease process but is much less relevant than other factors by the time cognitive symptoms appear—Dr. Gan and her team have zeroed in on a particular variant of the Alzheimer’s-associated protein tau.

Dr. Gan, who is also the Burton P. and Judith B. Resnick Distinguished Professor in Neurodegenerative Diseases in the Feil Family Brain and Mind Research Institute, believes that this form of tau is a potential disease driver, and is developing an antibody-based treatment that would selectively target it.

At the same time, her team is working to boost the function of brain-resident immune cells called microglia. Microglia normally help protect other brain cells from the Alzheimer’s disease process, but when the disease sets in, a brain-inflammation signaling pathway becomes active and shifts microglia into a maladaptive, disease-worsening state. The investigators have identified small molecules that can douse that inflammatory signaling pathway and restore microglial function.

“Remember that for Alzheimer’s there are so far no effective treatments,” she said. With support from the Weill Cornell innovation ecosystem including CTL, Biopharma Alliances and the Tri-I TDI, Dr. Gan and her team hope to change that.