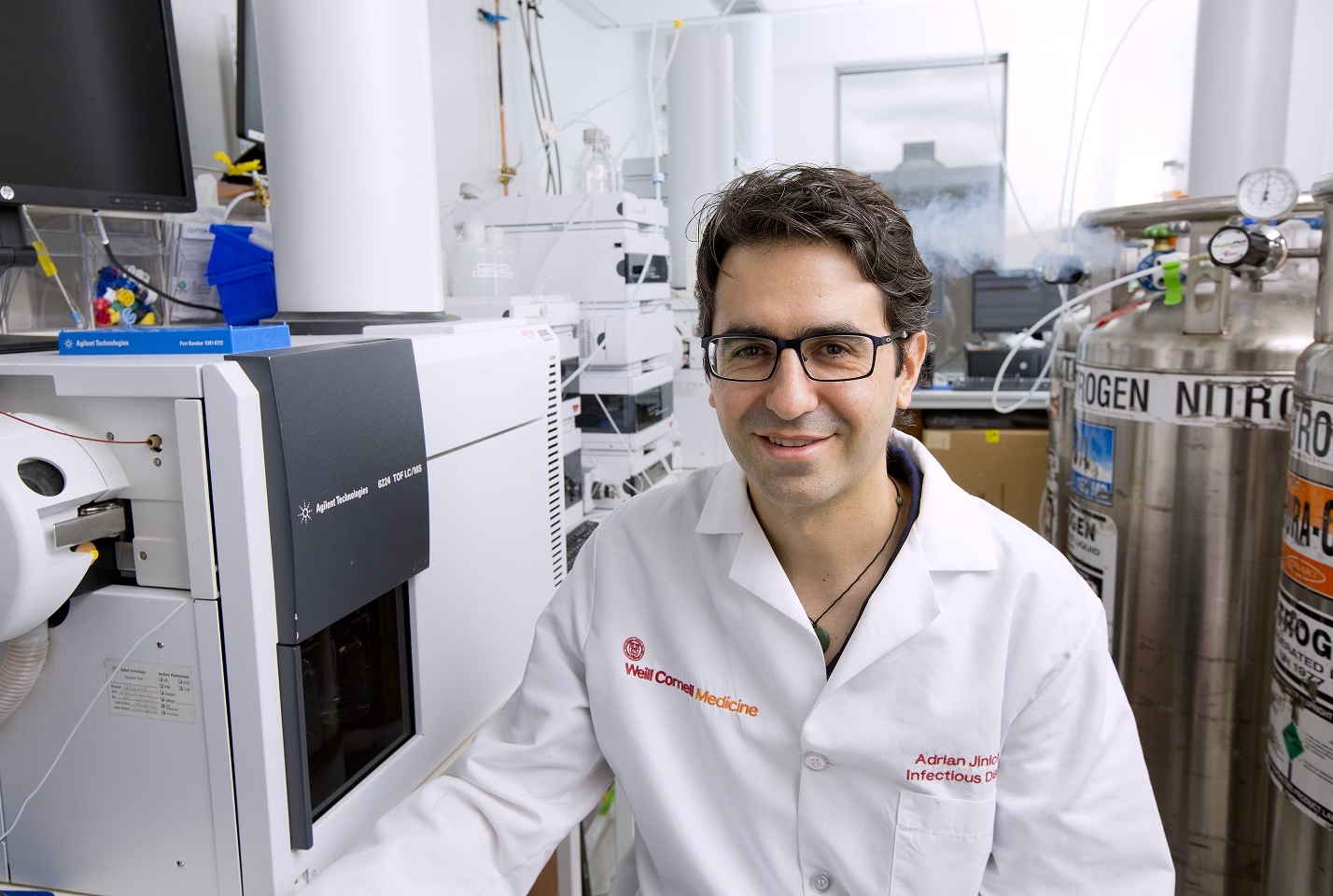 Dr. Adrian Jinich came to Weill Cornell Medicine in 2018 as a new postdoc—with the goal, he says, of doing cutting edge research “while making the world a better, healthier and more just place.” He was already on that path: he’d previously co-founded a series of free STEM workshops for high school and college students in his home country of Mexico and elsewhere, as a way to improve access to high-quality science education for the underserved. At Weill Cornell Medicine, Dr. Jinich has continued his interest in combatting social inequity by working under Dr. Kyu Rhee, an associate professor of medicine and of microbiology and immunology in the Division of Infectious Diseases whose lab is focused on battling tuberculosis, a deadly infectious disease that disproportionately affects impoverished nations. “It resonated with me because it’s mainly a burden in developing countries,” says Dr. Jinich. “I really want to do science that contributes to solving real-world problems.”

In early September, Dr. Jinich was honored with a prestigious award aimed at helping him achieve that dream. He was named one of last year’s Hanna H. Gray Fellows, a nationwide program established in 2017 by the Howard Hughes Medical Institute (HHMI) to identify and retain young researchers with the potential to make significant contributions in the biomedical and life sciences; intended to increase diversity in those disciplines, it strives to recruit women, minorities and other underrepresented groups. Each fellow receives up to $1.4 million over eight years through a two-phase arrangement that provides funding from early postdoc training through the beginning of a tenure-track faculty position, as well as offering mentoring and networking opportunities within the HHMI community. The idea is to provide support for these scientists through what can be a tricky career transition, so they forge ahead to become academic leaders and inspire future generations. “It’s exciting to be a postdoc, but it’s also a relatively tough stage—there’s this bottleneck of uncertainty wondering what’s going to happen next,” says Dr. Jinich. “This opens up so many doors.” Another benefit of the Gray fellowship: throughout the duration of the award, recipients are allowed to explore different avenues of research. Says Dr. Jinich: “It gives you the flexibility to follow your curiosity.”

Dr. Jinich’s background is unusual among biomedical researchers. After attending a private school in Mexico City, he earned a Bachelor of Science in physics and astronomy from Northwestern in 2006. In three separate stints during and after undergrad, he conducted research at Israel’s Weizmann Institute of Science, then returned to his home country for a master’s in applied math from the Center for Mathematical Research in Guanajuato, followed by two years working as a technician in a yeast genetics lab at Mexico’s National Laboratory for Genomics and Biodiversity. In 2011, he enrolled at Harvard to pursue a PhD in systems biology. For his dissertation, he studied metabolism—the biochemical reactions occurring in cells that are central to sustaining life—using advanced computational techniques to better elucidate the thermodynamics of the process, which are still not fully understood. “For six years I didn’t touch a pipette,” he recalls. “I was just at the computer, programming all the time.” Now he’s doing more hands-on work under Dr. Rhee, who notes that Dr. Jinich’s multidisciplinary experience brings a fresh perspective to the lab. “He has the ability to master complex scientific concepts, while at the same time he’s able to see the big-picture relevance for clinical application,” Dr. Rhee says. “It’s really quite striking.”

For his fellowship application, Dr. Jinich outlined a project to develop computational and experimental tools designed to discover the functions of “orphan enzymes”—those that have no known associated gene in any organism—that make up the genome of the bacteria that causes tuberculosis. With that information, Dr. Jinich believes, scientists might be able to identify vulnerabilities that could lead to new treatments. Improved therapies are vital, since doctors are seeing a rise in drug-resistant strains and only a few new classes of antibiotics for tuberculosis have been approved in the last 20 years. “The more you know about your enemy,” he says, “the better position you’re in to kill it.”

Dr. Jinich notes that his upbringing factored into launching the STEM education nonprofit he co-founded, Clubes de Ciencia Mexico (Science Clubs of Mexico). Though he was fortunate to attend a school with a strong science curriculum as a child, he realized that wasn’t true for many in Mexico’s public school system. During his time at the Weizmann Institute, he’d noticed the positive effect that STEM enrichment and training programs had on Israel’s young people. That greatly influenced his decision to continue his studies back in Mexico, where he and a few colleagues started offering science workshops to local high school students in the hopes of deepening the teens’ interest in the field. “It was a very shoestring operation,” Dr. Jinich recalls. “We had zero budget. We even bought the equipment ourselves.”

In 2014, Dr. Jinich mined the academic community at Harvard to expand the project. With friends and colleagues, he recruited volunteers to teach one-week summer workshops in communities around Mexico; Dr. Jinich himself led a plant biology class in which students built a rooftop garden. He also secured funding from organizations like the David Rockefeller Center for Latin American Studies. Within two years, Clubes de Ciencia had grown far beyond its country of origin; now under an umbrella group called Science Clubs International, it has chapters in 21 cities in seven nations, including Colombia, Bolivia and Brazil, and has taught more than 8,000 students. A number of alumni—now PhD candidates—are currently working as instructors. Says Dr. Jinich: “We have a second generation paying it forward.”