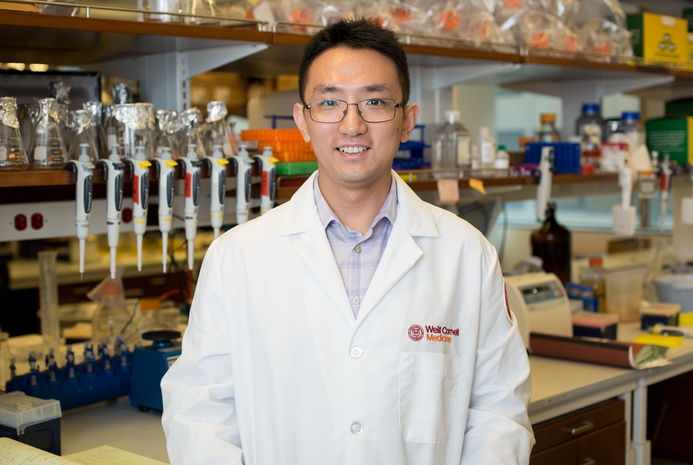 Scientists at Weill Cornell Medicine, Stanford University and the University of California, San Francisco have adapted genome editing tools to function in a common species of intestinal bacteria. With this technological advance, they can now precisely alter the human gut microbes’ production of small molecule metabolites that can affect their host’s metabolism, immune system and nervous system. The technique has revealed a new regulator of mucosal immune function, which operates at the externally facing surfaces that line organs such as the gut and the lungs. It could also form the basis for genetically engineering the gut microbiota to promote human health or treat disease.

Humans and other animals host thriving populations of microbes on and in their bodies. In recent years, investigators have found that these bacteria, viruses and fungi, collectively called the microbiota, exert profound influence on their hosts’ metabolism and disease pathology. The intestinal microbiota are especially diverse, varying from one individual to the next and hosting microbes that produce thousands of small molecules.

“There are many studies addressing associations between the gut microbiota and human diseases,” said Dr. Chun-Jun Guo, an assistant professor of immunology in medicine in the Division of Gastroenterology and Hepatology at Weill Cornell Medicine and lead author on the new study, published Dec. 13 in Science. Because the gut microbes appear to exert their influence on the host through the various bacterial metabolites they excrete, Dr. Guo and his colleagues wanted to probe these phenomena more thoroughly and understand the underlying mechanisms. “We wanted to develop a technology that allows us to manipulate the level of these bacterial metabolites or genes in vivo so we can directly study their impacts on the host biology,” Dr. Guo said.

To do that, the researchers targeted Clostridium sporogenes, a common bacterial species in the human intestine. Previous techniques to genetically modify C. sporogenes were labor-intensive and time-consuming, so Dr. Guo and his colleagues developed a new tool, a CRISPR-Cas-based genome editing system, for this gut bacterium. This allowed the scientists to delete specific metabolic genes in the C. sporogenes that leads to the depletion of the corresponding metabolites.

The mutant bacteria colonize the animals’ intestines normally but don’t produce the same set of bacterial metabolites as their wildtype counterpart. The researchers could then remove one C. sporogenes metabolite at a time, testing the animals to see how their physiology differed with subtly different microbiota.

“This gives us a very good opportunity to examine the molecular mechanisms behind the microbiota-host connection, because we can track down single metabolites by precisely modulating their levels in the host using Clostridium genome editing,” said Dr. Guo, who is also a scientist at the Jill Roberts Institute for Research in Inflammatory Bowel Disease at Weill Cornell Medicine.

In the course of that work, scientists have already made an interesting discovery in mice: a group of C. sporogenes metabolites called branched short-chain fatty acids modulate a mucosal immune cell population that produces immunoglobulin A, an antibody involved in inflammation. That adds to a growing body of evidence that gut microbial metabolites play critical roles in mucosal immunity and inflammation.

Because C. sporogenes is common in both mice and humans, the new system provides an ideal model for studying other Clostridium-derived metabolites that are health or disease-relevant. Dr. Guo hopes to expand this technology to encompass other species of gut bacteria as well as other parts of the body. “I think it is possible to develop genetic tools in a whole set of different gut microbes,” he said, “which will eventually allow us to manipulate the genes in the whole microbiome as a community.”

This study was supported by several grants including a Director’s New Innovator Award from the National Institutes of Health (1DP2HD101401-01) to Dr. Chun-Jun Guo.