Risk Factor: For Patients With a Genetic Syndrome That Predisposes Them to Many Cancers, a New Vaccine Could Be a Lifesaver 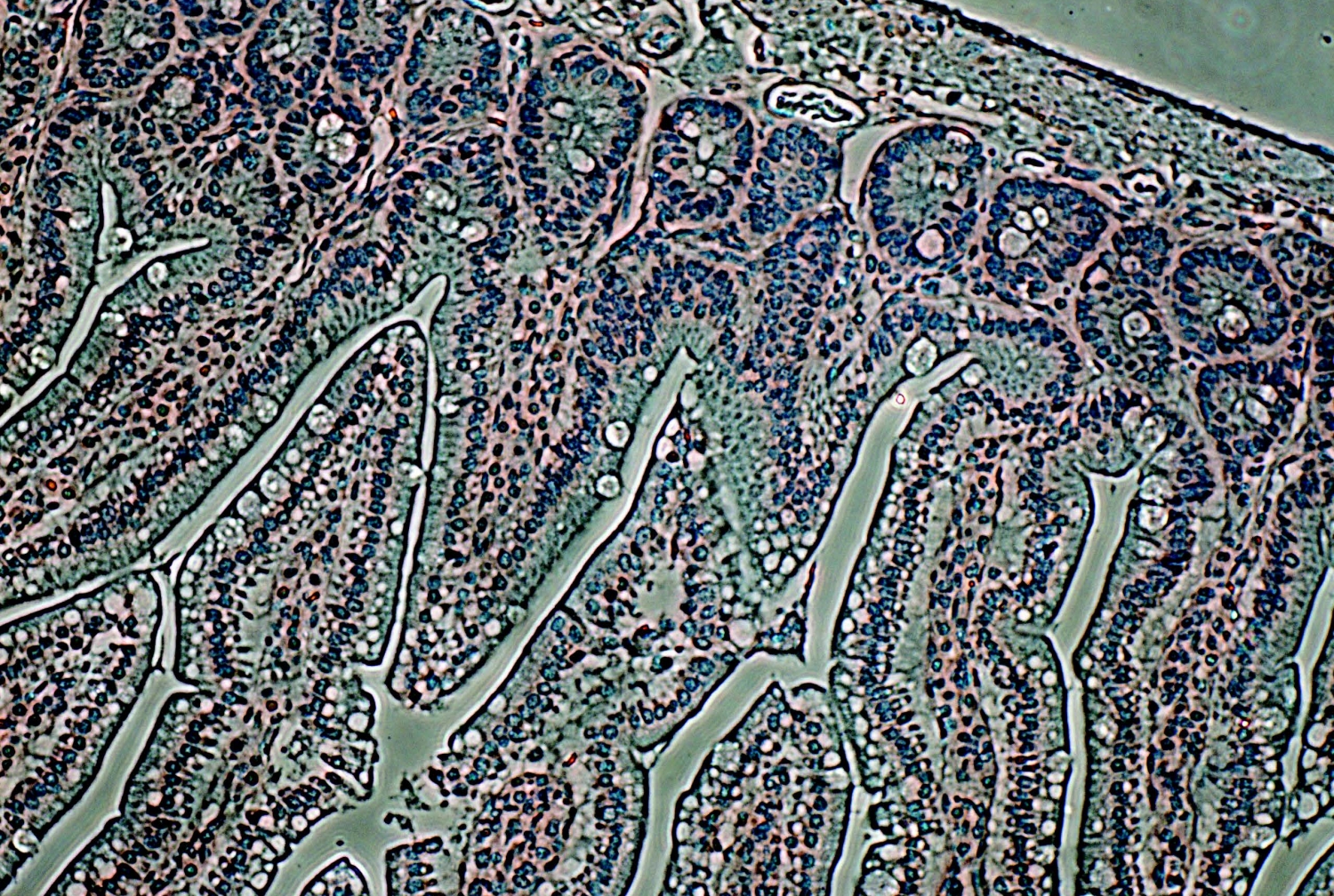 A STRONG DEFENSE: This magnified cross-section of the lower gastrointestinal tract of a mouse genetically engineered to have Lynch syndrome shows that the vaccine Lipkin is developing increases production of molecules (seen in pink) that recruit immune cells to fight tumor cells. Cell nuclei are seen in blue, while the thick gray lines are gastrointestinal epithelial cells.

One of the most common causes of hereditary cancer, Lynch syndrome affects some 1.1 million Americans, who face a lifetime risk of colorectal cancer as high as 80 percent as well as elevated rates of many other cancers, including of the endometrium, kidneys, ovaries and prostate. Patients seldom learn they carry the mutations associated with Lynch syndrome until they or a relative have cancer—and that diagnosis may affect their entire family. “You have a 50-50 chance of passing it on to each of your children, so the likelihood that other people in the family would have it is enormously high,” says Dr. Felice Schnoll-Sussman, professor of clinical medicine and director of the Jay Monahan Center for Gastrointestinal Health at NewYork-Presbyterian/Weill Cornell Medical Center. “This is one of those diseases where the patient can feel like they have a target on their back, especially because these are often people who have seen family members succumb to cancer.”

It’s a diagnosis that haunts patients throughout their lives and requires constant vigilance, explains Dr. Schnoll-Sussman, who works to ensure her patients and their affected relatives have regular cancer screenings. “I like to say to a patient when we initially meet, we are basically attached at the hip,” she says. “For a lifetime.”

But patients may one day be spared that anxiety, thanks to a vaccine that could effectively train the immune system to stop Lynch-associated cancers before they develop. At the annual meeting of the American Association for Cancer Research last spring, Weill Cornell Medicine clinical geneticist Dr. Steven Lipkin presented the promising results of a study that showed a vaccine he developed, in partnership with Dr. Schnoll-Sussman and other Weill Cornell Medicine colleagues, could prevent colorectal tumors in mice genetically engineered to have Lynch syndrome. That preclinical study has paved the way for the development of a human vaccine, the first of its kind that would target hereditary cancer. “We think that this approach is something that can actually be used for people at risk of many genetically linked cancers, not just those with Lynch syndrome,” explains Dr. Lipkin, co-leader of the Cancer Genetics, Epigenetics and Systems Biology Program at Weill Cornell Medicine’s Sandra and Edward Meyer Cancer Center. “But we have to start somewhere.” 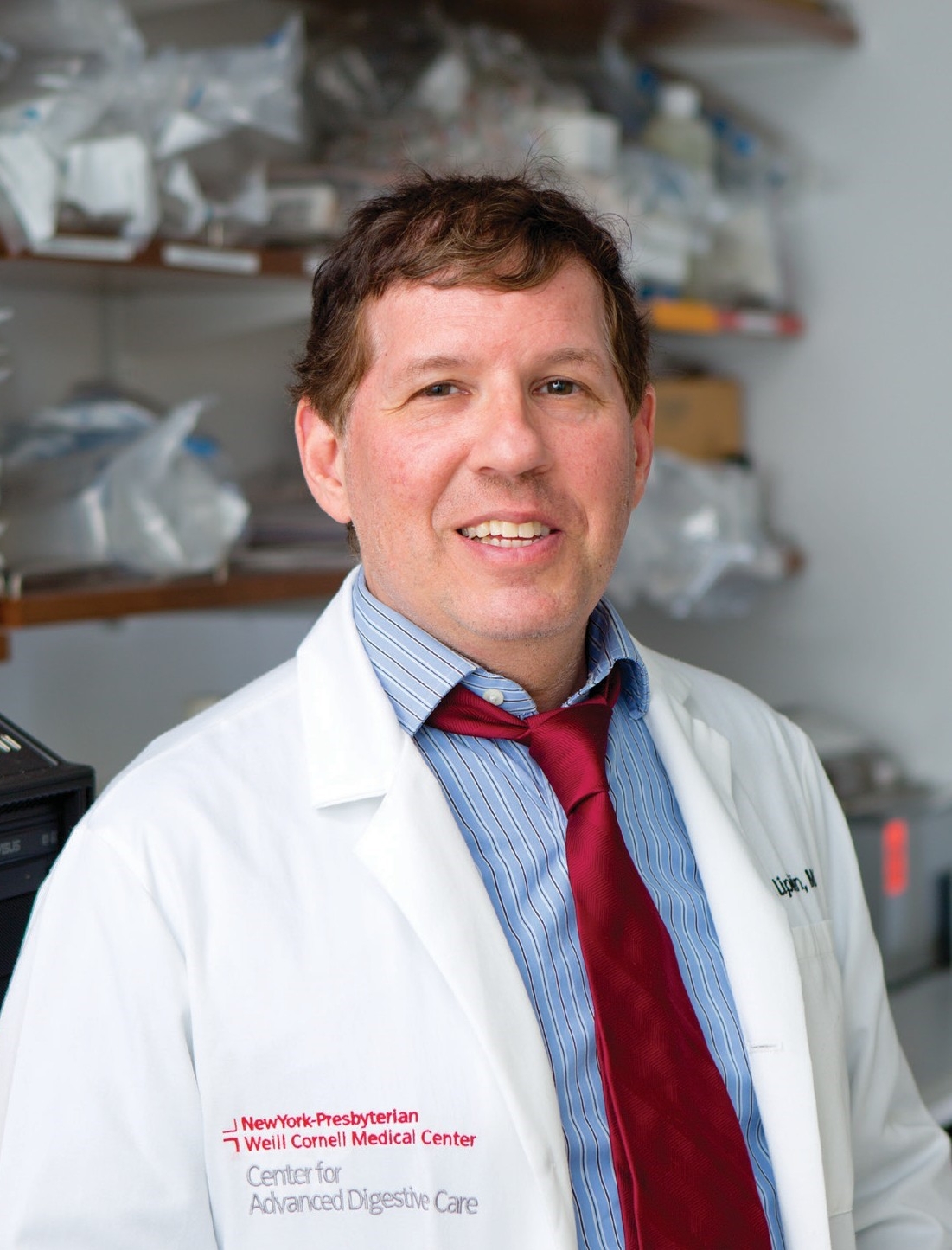 Lynch syndrome is caused by mutations in genes that encode proteins responsible for repairing mismatches when DNA is replicated during cell division. (As Dr. Lipkin puts it, these proteins act like a “molecular spellchecker.”) A faulty mismatch repair protein permits DNA replication errors that lead to changes in parts of the genome called “coding microsatellites,” certain tracts of repetitive DNA that may have many different functions. Mutated DNA encodes modified proteins, some of which may cause cells to become cancerous. And while the immune system is able to recognize some irregular proteins as so-called “neoantigens”—protein fragments stemming from mutations in tumor cells’ DNA—it is generally unable to mount a response sufficient to stop cancer in its tracks.

A vaccine, however, provides the immune system with advance training, allowing it to recognize and attack cancer cells with mutations common in Lynch syndrome—before a tumor has a chance to grow and spread. “It’s the same basic technology used for vaccines against measles or influenza,” explains Dr. Lipkin, also the Gladys and Roland Harriman Professor of Medicine at Weill Cornell Medicine and an attending physician at NewYork-Presbyterian/Weill Cornell. Creating the Lynch vaccine involved loading some 200 common mutations found in mice’s colorectal tumors into a hollowed-out virus, which was then given to other mice in the form of an injection.

The researchers found that the rodents’ immune systems apparently learned to recognize the neoantigens before cancer got a foothold, activating T-cells to attack mutated cells. Vaccinated mice had lower rates of cancer and therefore longer lifespans—380 days, compared to 241 days for a control group.

“From mice, we have data that this causes the immune system to recognize cancers even as small as single cells,” Dr. Lipkin says. “Cancer is very good at suppressing the immune system, but if you catch it very early, it’s much easier to cure.”

If eventual human trials are successful in preventing Lynch patients from developing cancer, the basic technology behind the vaccine could ultimately be used to combat other hereditary cancers, including breast cancer linked to the BRCA gene. In the meantime, he and Dr. Schnoll-Sussman stress the importance of education about

Lynch syndrome and expanded genetic testing for all patients with significant family history who are diagnosed with colorectal or endometrial cancers, the two most commonly associated with the condition. While early, regular and vigilant cancer screenings can save Lynch patients’ lives, less than 5 percent of people with the syndrome know they have it. But if the vaccine proves successful, that diagnosis will be an essential step toward preventing the syndrome’s potentially dire consequences. “There are some things that are incredibly special in medicine, things that we consider disruptive technology,” Dr. Schnoll-Sussman says. “For someone with a genetic mutation that can affect every cell in their body, this vaccine could be a life-altering proposition.”