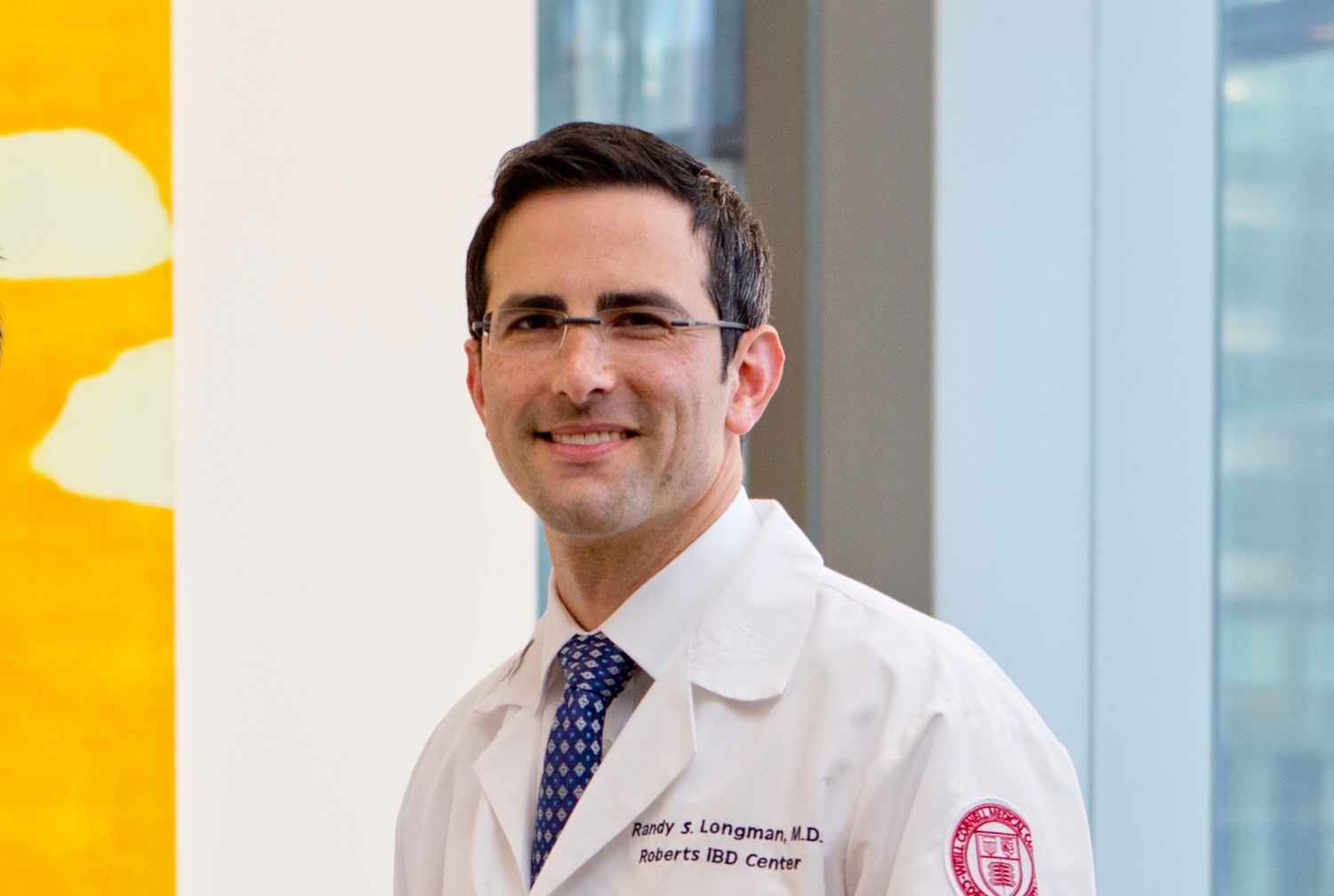 Under Dr. Longman’s leadership, the Roberts Center is expanding its clinical services offered by Weill Cornell Medicine and NewYork-Presbyterian/Weill Cornell Medical Center. The center’s physicians are continuing to collaborate with scientists based at the Jill Roberts Institute for Research in Inflammatory Bowel Disease at Weill Cornell Medicine, which focuses on the scientific investigation of a collection of debilitating conditions that affect the digestive system. They are also working with investigators at Cornell University’s Ithaca campus to develop new diagnostic tests and therapies. Dr. Longman succeeds Dr. Ellen Scherl, who was the Roberts Center’s founding director since the center’s inception in 2006.

“We are delighted that Dr. Longman has accepted the position as the new director of the Jill Roberts Center for Inflammatory Bowel Disease,” said Dr. David Cohen, chief of the Division of Gastroenterology and Hepatology at Weill Cornell Medicine and NewYork-Presbyterian/Weill Cornell. “Dr. Longman will build on our story legacy in IBD and oversee and expand our clinical, research and educational activities in the center. He is ideally suited to this role, and we look forward to his leadership.”

“The Jill Roberts Center has a stellar group of practitioners who have created a world-class infrastructure for IBD medicine, and I plan to build on that to expand our mission of patient care, research and education,” said Dr. Longman, who is also an assistant professor of medicine in the Division of Gastroenterology and Hepatology at Weill Cornell Medicine and a gastroenterologist at NewYork-Presbyterian/Weill Cornell. “As someone who has come up the ranks at Weill Cornell Medicine and NewYork-Presbyterian, I feel particularly honored by the appointment.”

The Roberts Center is a multidisciplinary clinical center that was founded with a generous gift from philanthropist Jill Roberts. Run jointly by Weill Cornell Medicine and NewYork-Presbyterian/Weill Cornell, it focuses on the diagnosis and treatment of IBD, which affects more than 1 million people in the United States and includes Crohn’s disease, ulcerative colitis and other conditions involving chronic inflammation of the colon and small intestine.

Dr. Longman, as a faculty member of the Roberts Center and Institute, is a prolific contributor to the medical literature on IBD—a literature that has been expanding rapidly as the incidence of IBD has increased in the United States and other developed countries in recent decades. Dr. Longman has led clinical trials testing potential therapies for colitis, and is researching how the intestinal microbe population—which includes bacteria, fungi and viruses— contribute to health and disease in the gut and in the rest of the body. In 2017, for example, he and his colleagues published a study in Science Translational Medicine showing how gut microbes in Crohn’s disease may trigger a spine-and-joint form of arthritis called spondyloarthritis.

The Roberts Center under Dr. Longman is expanding its IBD research efforts in collaboration with the Roberts Institute, which is led by Dr. David Artis and is dedicated to understanding the cellular, molecular and genetic underpinning of these diseases.

“Dr. Longman’s pioneering work investigating the microbial and cellular mechanisms driving IBD has illuminated new diagnostic and treatment approaches that can improve patients’ lives,” said Dr. Artis, who is also the director of the Friedman Center for Nutrition and Inflammation and the Michael Kors Professor in Immunology at Weill Cornell Medicine. “As director of the Roberts Center, Dr. Longman will lead our efforts to translate basic research findings into innovative patient care, and take observations from the clinic back to the bench.”

Ongoing projects between the center and the institute include a live cell bank, in which small samples of gut-lining cells are taken from consenting patients and used to study the biology of IBD and its response to treatments. In a related project called SMART IBD, researchers will obtain from patients not only samples of gut-lining cells but also gut microbes and blood samples before, during and after treatment, observing how they change with that treatment. “The goal of this project is to better understand why some people respond to a given medicine and some don’t, and to translate that understanding into prognostic markers so that we can more quickly assign the right drug to the right patient,” Dr. Longman said. “It’s a step towards precision IBD medicine.”

Under a recent $200,000 grant from the Kenneth Rainin Foundation, Dr. Longman and his Roberts Center colleagues also are collaborating with scientists at Cornell University’s Ithaca campus to develop a sensitive test that detects gut bacterial DNA in the blood—a potential diagnostic marker of the presence and severity of IBD.

The Roberts Center enrolls many of its patients in clinical trials of existing or prospective IBD therapies. One trial now underway is testing the effectiveness of seeding beneficial gut microbes, taken from healthy people, into patients with ulcerative colitis, Dr. Longman said. A smaller study in 2017 showed promising results for the therapy in such patients. Other trials at the center are testing the immune-modulating drugs ozanimod and etrolizumab.

To enlarge the practice and help ensure a future supply of doctors in this expanding specialty, the Roberts Center also has begun a fellowship program to train early-career gastroenterologists in the latest techniques.

“The Roberts Center has become what it is because of the vision and the energy of Jill Roberts and founding director Dr. Ellen Scherl, and now I look forward to picking up the reins and continuing to grow this enterprise,” Dr. Longman said.

Dr. Longman earned a bachelor’s degree from Yale in 2000, a doctorate in immunology from The Rockefeller University in 2006 and his medical degree from Weill Cornell Medicine in 2007 through the Tri-Institutional M.D.-Ph.D. Program. He trained in internal medicine and gastroenterology at Columbia University Irving Medical Center until 2013, when he joined the faculty at Weill Cornell Medicine as an assistant professor. In 2014, Dr. Longman also completed a postdoctoral fellowship in the laboratory of eminent immunologist Dr. Dan Littman at NYU Langone Health’s Skirball Institute of Biomolecular Medicine, where he studied the links among gut bacteria populations, IBD and autoimmune conditions outside the gut.

Dr. Longman has been an invited speaker at many IBD research conferences around the world, and is the recipient of a 2017 Career Scientist Award from The Irma T. Hirschl/Monique Weill-Caulier Trust.