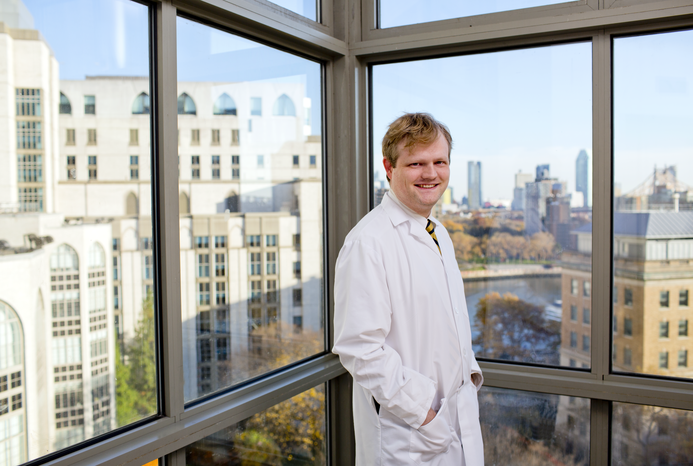 Heart disease, high blood pressure and diabetes are known as “silent killers,” so named because they often have subtle symptoms that go undetected. While osteoporosis may seem an unlikely addition to that list, Dr. Matthew Greenblatt says the common bone-thinning disease can be just as quiet, debilitating—and deadly. “For older people who fall and fracture their hip, there is a very low chance they’ll ever walk again,” he says. “And there’s a surprisingly high chance they’ll die due to complications.” 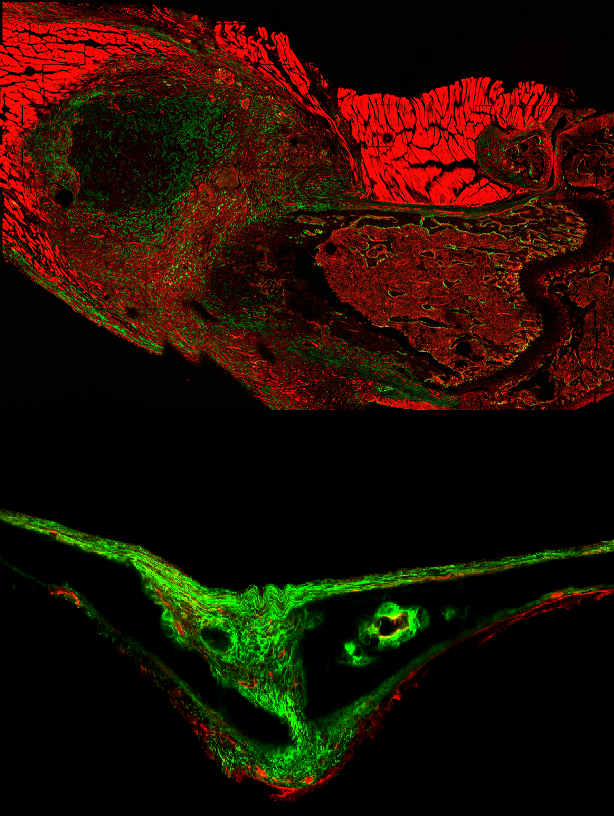 Bone Deep: A microscopy image taken six days after a fracture (top) shows an expansion of periosteal stem cells (show in green). Above: That same type of cell as seen in the skull of a 15-day-old mouse.

But Dr. Greenblatt, an assistant professor of pathology and laboratory medicine at Weill Cornell Medicine, is doing his best to change that. Over the past few years, he’s made groundbreaking discoveries that may lead to life-changing therapies for osteoporosis and other skeletal disorders. The National Osteoporosis Foundation estimates that some 10 million people in this country have the disease—which causes bones to weaken as we get older—and another 44 million Americans are at a heightened risk because of low bone density. Experts calculate that osteoporosis-related bone breaks cost the United States healthcare system $19 billion a year, with that figure projected to rise to more than $25 billion by 2025.

About half of all women, and up to a quarter of men, will break a bone in their lifetimes due to osteoporosis. And though the fracture itself is usually not fatal, potentially deadly complications such as pneumonia, blood clots and post-operative infection are common—meaning that, shockingly, these fractures ultimately kill as many women each year as breast cancer. New treatments, says Dr. Greenblatt, are “extremely important not only to the health of individual patients, but for public health as well.”

As Dr. Greenblatt notes, the majority of existing osteoporosis medications don’t help patients build new bone; instead, they stop the bone that is already affected from deteriorating further. So he and colleagues decided to look at a new approach involving special types of blood vessels inside of bones. They performed experiments on mice that were genetically altered to lack a protein—called SLIT3—that promotes the growth of these blood vessels and learned that the rodents without this protein exhibited low bone mass.

The team then wondered if SLIT3 could be used as a form of treatment, and tried it in a mouse model of postmenopausal osteoporosis. The strategy worked: not only was the osteoporosis reversed, fractures healed more quickly. Their results were published in Nature Medicine in May 2018. “We compared it head-to-head with the established drug used in this space,” says Dr. Greenblatt, the study’s co-senior author, “and it performed at least as well in helping to build bone in these mouse models.” He notes that the established drug currently used has limitations, since it can only be used for two years because there are concerns that it may increase the risk of developing bone cancer. Dr. Greenblatt’s project has so much promise, he recently received an award from the Daedalus Fund for Innovation, a Weill Cornell Medicine program designed to accelerate and build value around early-stage research projects with significant commercial potential. He will receive up to $300,000 over two years to advance this research and, in close collaboration with the Office of BioPharma Alliances and Research Collaborations, is searching for an industry partner to help develop these findings into a new medicine.

Dr. Greenblatt also spearheaded another key study on bone pathology, in which he identified a type of stem cell that plays an essential role in growing and healing the bone’s hard outer surface. As a Nature article described in September, he and his collaborators are the first scientists to discover these cells—called periosteal stem cells—along with evidence that bone contains multiple kinds of stem cells that each have distinct functions and are found in different places throughout the bone. This suggests another potential avenue for treating bone disorders, since Dr. Greenblatt theorizes that targeting periosteal stem cells directly could lead to the development of more effective drugs—noting that “this is probably the most important cell in the body for resisting fractures.”

A Missouri native, Dr. Greenblatt’s interest in science was sparked by his childhood asthma, a condition that improved as he got older. The experience inspired him to read medical textbooks, and by high school he was spending summers doing research at nearby medical schools. That curiosity continued through his graduate years at Harvard, where he entered a combined MD-PhD program and began his doctoral dissertation by looking at problems facing patients taking immunosuppressants. But after talking to colleagues who were doing bone research, he decided to shift focus. “I was in the field of immunology where we know a tremendous amount of detail about all the cells involved,” he says. “With bone, we know much less about the molecular pathways involved, and even less about the cells that are present. So I felt there were opportunities to do very important work in bone biology.”

Dr. Greenblatt came to Weill Cornell Medicine in 2014 as a third-year resident in clinical pathology after two years at Brigham and Women’s Hospital in Boston. The following year, he won both the National Institutes of Health (NIH) Director’s Early Independence Award and the Burroughs Wellcome Fund Career Award for Medical Scientists—which, he says, allowed him to transition directly to running an independent research lab without the traditional step of a postdoctoral fellowship. “The most valuable thing you have in life is time,” says Dr. Greenblatt, who joined the faculty in 2015. “Taking that path shaved several years off my trajectory and let me get into doing work I was enthusiastic about right away.”

Moving forward, he hopes his research can help in areas beyond osteoporosis. For example, he aims to study whether periosteal stem cells might aid patients undergoing orthopaedic procedures; he’s also investigating whether malfunctions in these cells could be a cause of bone cancer, as well as a number of birth defects affecting bones in the skull. “Our ultimate goal is to understand what steps these cells take toward becoming bone-forming cells,” he says. “We think that is the foundation to understanding how bones work, how diseases of the bone develop and how we can treat them.”