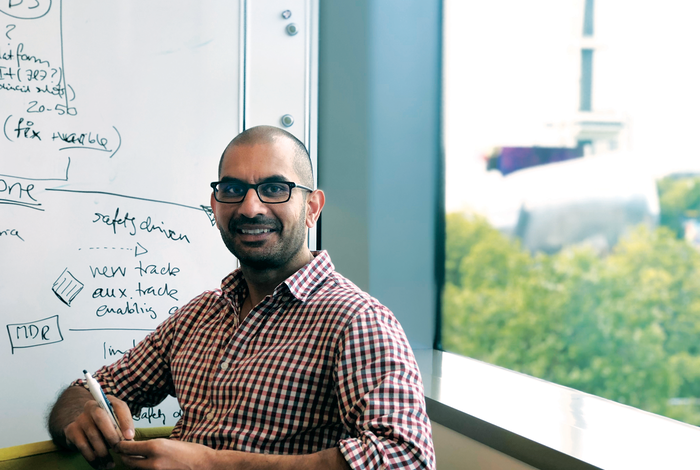 Dr. Omar Vandal, Ph.D. ’07, came to Weill Cornell Graduate School of Medical Sciences determined to make a difference in the world—focusing his studies on tuberculosis, the world’s most deadly infectious disease and one that sickens an estimated half-million people each year in his homeland of Pakistan. He did innovative doctoral research, identifying a key protein that the TB bacterium needs to survive within the host cell—information that may help scientists develop better drugs. But after all those years in the lab, Dr. Vandal wondered if he could help people even more by working outside it. “I had an incredible PhD experience, but as a postdoc, I’d be working in a narrow area of science—and often, you don’t see the fruits of your labor until much later,” he says. “I wanted something with more breadth, where I could have more of an immediate impact.”

For the last eight years, Dr. Vandal has been doing just that as a program officer for the Bill & Melinda Gates Foundation. The Seattle-based nonprofit—established in 2000 by the Microsoft cofounder and his wife—spends about $4 billion a year on innovative ways to eradicate disease and improve health and wellbeing, particularly for people who have the fewest resources. Dr. Vandal has overseen grants focusing on such areas as new global health technologies, early-stage drug discovery and other interventions for major health threats like malaria and tuberculosis. And he’s a hands-on manager, logging tens of thousands of miles visiting biotech firms, pharmaceutical companies, academic institutions and more—trying to judge which up-and-coming technologies have the most potential, and evaluating the progress of initiatives the foundation has funded. “We’re like a nonprofit venture capitalist,” says Dr. Vandal, “but investing in things that will serve the developing world.”

The foundation’s approach to philanthropy has had a dramatic effect: Its $15 billion investment in vaccines alone has helped save the lives of an estimated 5 million children since 2000. It’s also known for embracing bold ideas, giving money to projects that the NIH or other traditional funders might consider too high-risk. For instance, Dr. Vandal is currently overseeing a portfolio of grantees working on a synthetic form of colostrum, the first milk a woman produces after childbirth, which is packed with beneficial antibodies to help babies ward off illness. The hope is that it could supplement breastfeeding in nations where mothers are malnourished, helping boost newborns’ immune systems. “We’re constantly challenging ourselves to think in different ways,” says Dr. Vandal. “To be better, bolder, more creative.”

Dr. Carl Nathan, chair of microbiology and immunology at Weill Cornell Medicine, served as Dr. Vandal’s doctoral co-adviser. He says that his former student plays a crucial role in facilitating medical research—one that’s often overlooked. Dr. Nathan is a member of the Gates Foundation’s TB Drug Accelerator program, which brings together researchers from pharmaceutical companies and academia to develop new therapies for the disease. The foundation has given his lab about $9.5 million in funding over the last decade, including a grant that Dr. Vandal began managing in 2011. That award was part of a foundation program called Grand Challenges Explorations, created to support innovative, early-stage global health research. Initial funding is $100,000, but successful projects can receive follow-up awards of up to $1 million.

Dr. Nathan received an initial one-year grant to study one of the “last-line” defenses that the TB bacterium uses to survive, which could be key to understanding why the disease has become increasingly resistant to current antibiotics. But at the end of the term, he and his colleagues hadn’t collected enough evidence to officially qualify for the next level of funding. Dr. Vandal’s review, however, found that the work had great potential, and he helped secure another one-year $100,000 award, which eventually led to a $646,000 second-phase grant and a pivotal 2015 study published in Cell Host & Microbe that illustrates another potential target for TB drug development. That study inspired others in Dr. Nathan’s lab to launch related projects that he believes could inform more effective tuberculosis treatments. “At the typical, bureaucratically managed program, that funding would have just stopped,” says Dr. Nathan. “But Omar made the judgment that there was promise in this. He kept these projects alive.”

Dr. Vandal is also trying to promote change in another way: by co-producing a documentary about Nobel Prize-winning Pakistani physicist Dr. Abdus Salam. Released in January 2018 and screened at several international film festivals, “Salam” took more than a decade to make—but Dr. Vandal says it was important to him to honor the late physicist’s life and achievements. Dr. Salam grew up in a poor farming town but went on to do pioneering research, including work that led to the discovery of the Higgs boson, also known as the “God particle.” Though he was the first Muslim to win a Nobel for science, he has been rejected in Pakistan, Dr. Vandal explains, because he belonged to a minority sect of Islam that the government considers heretical. Says Dr. Vandal: “He’s an unsung hero and we should really tell his story, because he may serve as inspiration for future generations.” Dr. Vandal and his colleagues are currently doing initial development on other films that may inspire children in the developing world to pursue scientific careers.

Dr. Vandal’s own passion for science goes back to childhood, when he filled his family’s backyard with roosters, peacocks, turtles and other animals to study. As an undergraduate, he majored in biology at Ohio’s College of Wooster, a small school that he expected to attend for a year before returning to Pakistan for medical school. Finding a passion for research, a track largely unavailable in Pakistan, he opted to stay in America to earn his B.S. and Ph.D. He worked for two years at the Global Alliance for TB Drug Development before being recruited by the Gates Foundation, which sent him to London for six months to hone his skills at a venture capital firm. Dr. Vandal says he’s humbled that his job allows him to help so many others—and that he’s grateful for the foundation’s commitment to its employees. “Going to the Gates Foundation was a dream opportunity,” he says. “There’s really no place like it.”