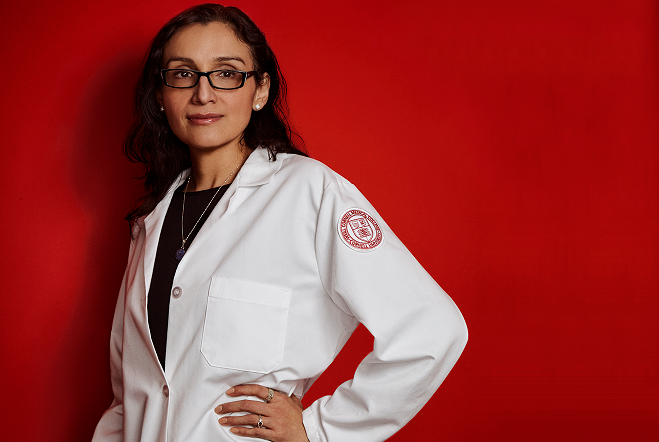 Acute myeloid leukemia (AML) is one of the most common blood cancers in adults. The disease is difficult to treat with chemotherapy and usually proves fatal. However, researchers have identified a potential chink in the armor: AML cells have a greatly reduced ability to export iron compared with normal blood cells, leaving them at risk for iron induced death.

Now, researchers at Weill Cornell Medicine and the Sloan Kettering Institute have found a way to exploit this vulnerability. In a study published March 25 in Nature Nanotechnology, the team showed that an U.S. Food and Drug Administration-approved anemia drug can boost iron levels in AML cells to toxic levels. The inability of AML cells to clear the excess load of iron, results in a selective killing of the cancer cells while leaving normal cells unharmed.

“It’s very exciting that we have a drug that appears to be effective against a disease that has been hard to treat,” said co-senior author Dr. Jan Grimm, a molecular imaging specialist and expert in nanoparticle technology. “We think this approach can benefit patients with AML and possibly other leukemias and tumors as well.”

“Understanding the vulnerabilities of cancer cells, in this case their inability to export iron, results in an Achilles heel that can be targeted by delivering excess loads of iron,” said co-senior author Dr. Monica Guzman, an associate professor of pharmacology in medicine and a member of the Sandra and Edward Meyer Cancer Center at Weill Cornell Medicine.

The drug, called ferumoxytol, consists of iron nanoparticles — microscopic particles with diameters less than one-thousandth the diameter of a human hair. Ferumoxytol was approved by the FDA in 2009 to treat people with anemia, whose iron levels are too low because of chronic kidney disease. In 2018, the application was broadened to include adult iron deficiency anemia.

Normal cells can export excess iron using a protein called ferroportin. In contrast, AML cells that have low ferroportin levels are unable to get rid of an iron surplus. Delivering excess iron through the particles tips the balance, causing the cancer cells to die.

The Nature Nanotechnology study found that treatment with ferumoxytol proved effective in mice. The drug reduced the number of AML cells and enabled the animals to live nearly 75 percent longer. The researchers studied cells from other leukemia types and saw the same kind of cell death from iron overload. This suggests ferumoxytol could be effective across a wide range of leukemias, the investigators said.

The strong antileukemia effects of ferumoxytol came as a bit of a surprise. In 2014, Dr. Grimm’s lab published research showing that ferumoxytol can deliver drugs or imaging materials to tumor cells. Researchers regarded the nanoparticles mainly as vessels to carry cargo or imaging agents that did not have significant additional biological effects. They did not suspect that the nanoparticles alone could kill cancer cells.

“We are exploring ways to make them work even better,” Dr. Grimm said. “We have just scratched the surface of their potential.”

Weill Cornell Graduate School of Medical Sciences doctoral student Edwin Pratt, a member of the Grimm lab and the study’s co-first author—along with Dr. Vicenta Trujillo-Alonso, a postdoctoral associate in medicine at Weill Cornell Medicine—says ferumoxytol circumvents the leukemia cells’ normal control system to cause the iron excess load. “What’s impressive is that it destroys not just the leukemia cells, but also the leukemia stem cells that give rise to them,” he said. “A lot of other cancer drugs have trouble getting to the stem cells, so the cancer is not fully eliminated.”

The researchers say their next step is to demonstrate the effectiveness of ferumoxytol in combination with existing frontline therapies for AML and other leukemias. Since ferumoxytol has been used in patients for a decade, there may be much less need, for safety testing.