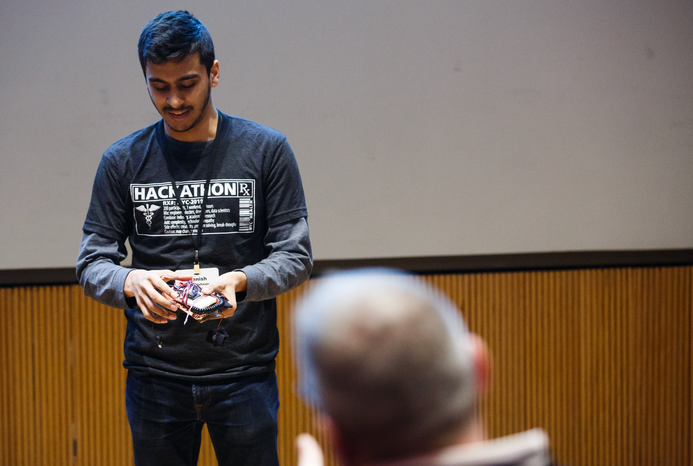 For first-year Weill Cornell Graduate School of Medical Sciences doctoral student Suniyya Amna Waraich, developing new therapies for stroke patients is personal: A close relative was at a family gathering when he had a stroke. Fortunately, the doctors in her family were able to diagnose it early, she said, he has recovered well as a result.

“But even in his case, the weight of constant wariness and anticipation of another stroke is impossible to shake,” said Waraich, who is studying neuroscience. “I understand first-hand the value of an early-detection system.”

As a participant in the third annual NYC Health Hackathon, Feb. 8-10 at Weill Cornell Medicine, Waraich and a team of students and faculty created such a system: a mobile app for early detection of stroke in real-time. Their innovation, named DESTROKE, won “Most Impactful Hack.” 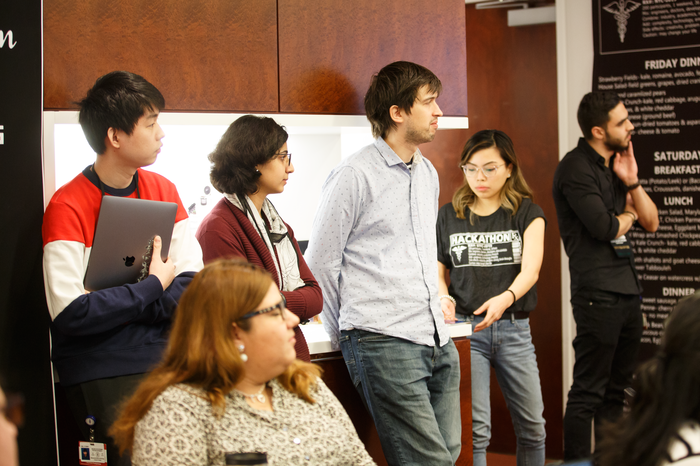 “The event brought together people from different backgrounds and perspectives to create something new,” said Dr. Julianne Imperato-McGinley, principal investigator of the CTSC who directed the event, “where anyone from anywhere has value to offer and feels included.”

The event began the evening of Feb. 8, during which participants formed into 19 teams and worked together to develop their projects. Among the innovations: an app to help consumers make better food choices while grocery shopping; separate peer-support platforms to aid young people suffering from depression and anorexia; and a medication-reconciliation app for helping patients and their caregivers keep track of medications.

Two days later, the teams demoed their prototypes to a group of judges, who selected 10 teams to move on to the final round.  In addition to recognizing DESTROKE, the judges awarded Most Innovative Hack prize to mPOD (mobile post-op device), a temporary, implantable, infection-detection sensor that alerts clinicians when E. coli, staph and other pathogens collect at wound sites, allowing early intervention before symptoms surface. Team mPOD includes members from Cornell’s Ithaca campus, Harvard and CUNY Queens College.

“We wanted to provide a space where individuals can stretch, grow, take risks and learn,” said My Linh H. Nguyen-Novotny, assistant director of programmatic development at CTSC, who managed the event’s planning and day-to-day activities in partnership with Ami Stuart, tech events manager at Entrepreneurship at Cornell. “We hope that above all, participants took away from the event friendships and bonds, along with the chance to explore, take risks, learn from one another and meet people they wouldn’t otherwise.” 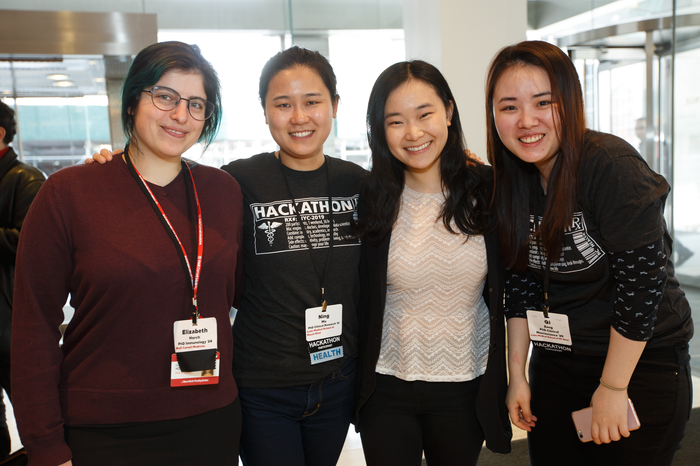 The event's success in developing meaningful innovations is a testament to the participants' talents.  “The participants' breadth of knowledge, schools, degrees and interests was really impressive," Stuart said. "I knew that if we could get everyone to mix outside their comfort zones, some magical things might happen. I had high hopes and the participants did not disappoint.”

DESTROKE aims to address a critical medical need: Stroke is the fifth-leading cause of death in the United States, affecting more than 750,000 people each year.

“One of the biggest factors in stroke outcome is time to treatment, but there are no existing validated tools for early detection of stroke by patients,” said DESTROKE team medical leader Dr. Evan Noch, a post-doctoral fellow in Dr. Lewis Cantley’s lab in the Sandra and Edward Meyer Cancer Center at Weill Cornell Medicine, and clinical fellow in neuro-oncology at Memorial Sloan Kettering Cancer Center.

DESTROKE uses facial, motion, speech and language recognition technologies—based on validated best practices from the National Institutes of Health’s stroke scale—to help determine if a person has suffered a stroke. For example, a camera can capture changes in facial symmetry, including drooping of the mouth on one side, a symptom of stroke. The app allows immediate communication of test results to family contacts and emergency medical services.

The prize money will enable the DESTROKE team—which includes Yubin Xie, technical leader Tomer Yaron and Dmitrii Meleshko, all doctoral students in the Tri-Institutional Computational Biology and Medicine program at the Weill Cornell Graduate School of Medical Sciences, and Ciarra King, a fashion design student at the Fashion Institute of Technology—to complete the app and formally launch it. The team will also seek to collaborate with the CTSC to identify potential patient-users. 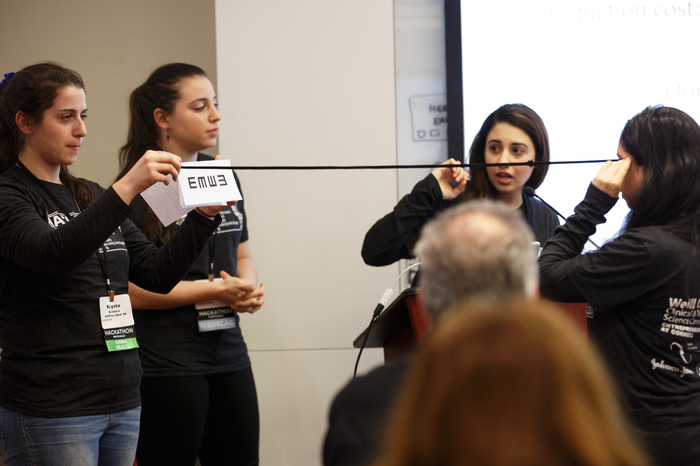 MasquerAID team member Horch participated in the Hackathon to challenge herself and find creative healthcare solutions.

“As someone who studies infectious diseased,” she said, “it’s very important to me to aim for a positive impact. The NYC Health Hackathon has proved to be a great way to learn and do just that.”