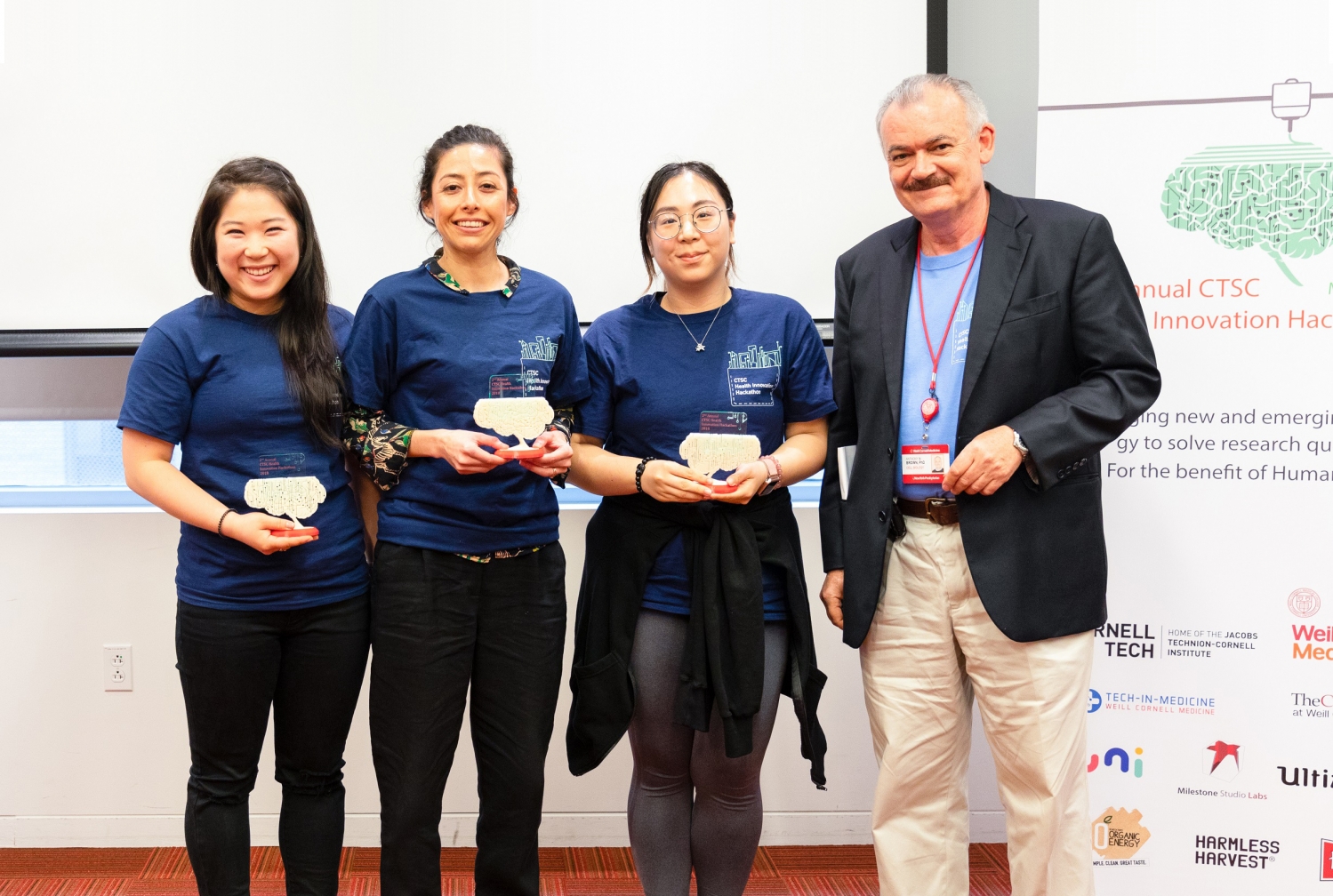 As a laryngologist, Dr. Anaïs Rameau may recommend surgical removal of the voice box to patients with cancer or severe swallowing dysfunction. Although voice rehabilitation options exist for these patients, the speech they produce has a rough or robotic quality that impairs intelligibility and can limit the vocal nuances inherent in natural expression.

Dr. Rameau is passionate about finding a way to restore these patients’ voices and, during Weill Cornell Medicine’s second annual Health Innovation Hackathon last month, challenged participants to do just that.

“It's hard for these patients to project their voices and be heard. And because the speech is abnormal, it's further stigmatizing,” said Dr. Rameau, an assistant professor of otolaryngology at Weill Cornell Medicine and a laryngologist at its Sean Parker Institute for the Voice. “We are hoping we can create a tool for improved communication for these patients, allowing them to create their own voice and be heard as they would like to.”

CTSC committee members selected 10 five-person teams from an initial 17 to participate in an intensive two-and-a-half day marathon of brainstorming and device making, held May 18-20. Eight teams ultimately went on to the final showcase on June 1, giving five-minute presentations about their work products to a panel of judges—competing for a $10,000 one-year grant to further develop the winning prototype.

Dr. Rameau’s team, dubbed MyophonX, designed a wearable, 3D-printed mask that senses eight different muscle groups of the face and neck and uses machine learning to produce speech, which is sent wirelessly to a cell phone. Team MyophonX shared the grand prize, the $10,000 Novel Technology Team Award, with team Sensible Hand, which developed a 3D-printed prosthesis that is able to provide sensory feedback and has the ability to control how much force to use when touching and holding an object.

Eugenia Papadopoulos, an occupational therapist at Hospital for Special Surgery and team leader of Sensible Hand, said the grant will enable her teammates to enhance the design of the prosthesis to make it work more consistently and efficiently.

“The team went out of their way, and worked really well and hard together,” Papadopoulos said. “If it wasn't for the team, there would be no Sensible Hand.”

That’s precisely the point of the Hackathon, exemplified by a quote from Albert Einstein that Dr. Imperato-McGinley shared at the start of the event: “We cannot solve problems with the same thinking that created them in the first place.”

“There is a lot of talk in academia about breaking down silos and working in multidisciplinary teams, but there’s no better way to drive home that message than to have a hackathon,” said My Linh Nguyen-Novotny, assistant director of programmatic development at the CTSC, who organized the event. “There was a free flow of communication and information during the hackathon, and perhaps if the participants can carry this feeling and this way of working back to their labs we can change the culture slowly.”

“At medical and graduate school, we spend a lot of time teaching students about the creative ideas of the past, but relatively little time in encouraging them to think creatively about the present and the future,” said Dr. Anthony Brown, co-director of the CTSC TL1 training program, director of medical student research and associate professor of cell and developmental biology at Weill Cornell Medicine, during his welcoming remarks at the showcase. “As Henry Ford said, ‘The most dangerous notion a young person can acquire is that there's no more room for originality.’ This event is an antidote to that.”

In addition to the grand prize, the Hackathon also recognized team Milky Way with first place for developing a tech solution to help Syrian refugee mothers with breastfeeding; team Zleep with second prize for developing an app to efficiently extract information on the pattern of sleep from electroencephalogram data; and team Endoscoop with third prize for devising a customizable endoscopic tool for gastroenterologists to remove dead tissue from the pancreas.

Milan Gunasekera, an incoming first-year student at Cornell Tech who led Team MyophonX, said his hackathon experience will stay with him as he continues his education, with his ultimate goal of becoming a physician.

“I think there’s so much room for innovation in medicine,” Gunasekera said. “The hackathon taught me that you can take an intuitive idea and change a patient’s life for the better.”