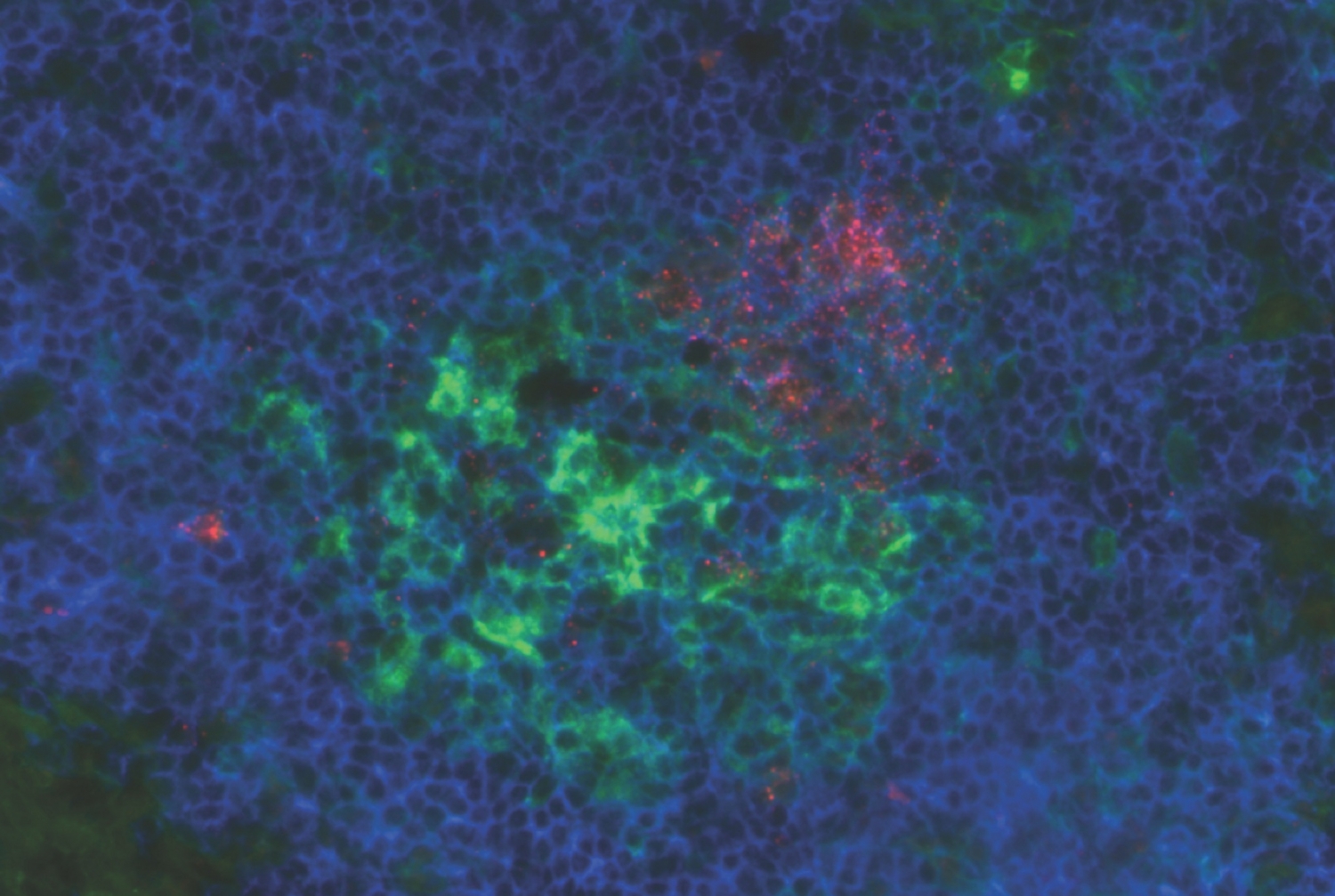 Germinal centers are sites within the lymph nodes and the spleen where B cells (shown in blue) divide and turn into antibody producing cells. On day seven after vaccination, the germinal center shows separation of two zones, the dark zone (red) and the light zone (green). B cells undergo rapid cell division in the dark zone. Once they stop dividing, B cells migrate from the dark zone to the light zone and start to express antibody on their cell surface.

Vaccines containing inactivated versions of disease-causing germs are traditionally not as effective as live vaccines made with weakened pathogens. But new research from Weill Cornell Medicine scientists reveals how a molecule found in live vaccines produces a robust immune response, and adding it to an inactivated vaccine can create the same strong results.

These insights may provide a blueprint for engineering more potent inactivated or “dead” vaccines that can deliver strong immunity while overcoming concerns about the health risks of live vaccines.

“There has been a reluctance in the general population to get vaccinated, but vaccines are the single most effective medical intervention proven to prevent disease,” said senior author Dr. Julie Magarian Blander, a senior faculty member in the Jill Roberts Institute for Research in Inflammatory Bowel Disease at Weill Cornell Medicine, who was recruited as a professor of immunology in medicine. “We have known that live vaccines provide better protection, often for life, in one dose, compared to dead vaccines that frequently require multiple doses or boosters over time.”

In the study, published March 13 in Immunity, the scientists identified how a molecule called bacterial RNA signals the immune response to stimulate the generation of specialized immune cells, called follicular T helper cells. Those cells play a critical role to help another type of immune cell, called B cells, make antibodies, which are proteins that recognize and neutralize invading germs before they cause infections.

“Making a follicular T helper response has been one of the Holy Grails in vaccine research,” Dr. Blander said. “We found that dead vaccines are not very good at generating follicular T helper cells, and adding bacterial RNA increased the numbers of follicular T cells and led to higher antibody titers.”

The study’s findings suggest a path for creating effective modified dead vaccines for bacterial pathogens such as Staphylococcus (which causes staph infections), Neisseria (which causes gonorrhea and bacterial meningitis), Shigella (which cause intestinal disease), Vibrio cholera, Listeria and Salmonella.

The findings may also help improve the performance of existing subunit vaccines, which contain only part of the pathogen, and salvage vaccines that may have been shelved due to inefficacy. “We’re excited that we identified the signal and the pathways, but bacterial RNA is very unstable,” Dr. Blander said. “The next step is to develop stable small compounds that target these pathways.”

Dr. Blander and Dr. Gaetan Barbet, lead author on the study, collaborated with colleagues, including Dr. Iliyan Iliev at Weill Cornell Medicine, Dr. Leif Sander at Charité University Hospital in Berlin, and Dr. Andrea Cerutti at the Icahn School of Medicine at Mount Sinai and the Catalan Institute for Research and Advanced Studies in Barcelona.

They are currently exploring how to modify a vaccine for the anthrax bacterium and expanding their sights to viruses, starting with H1N1 influenza, the strain responsible for the flu epidemic in 2009. Most commonly administered in an inactivated form, the flu vaccine is a high-interest target for improvement. Its effectiveness usually varies between 50 and 70 percent but can be as low as 36 percent, as seen in the 2017-18 season.