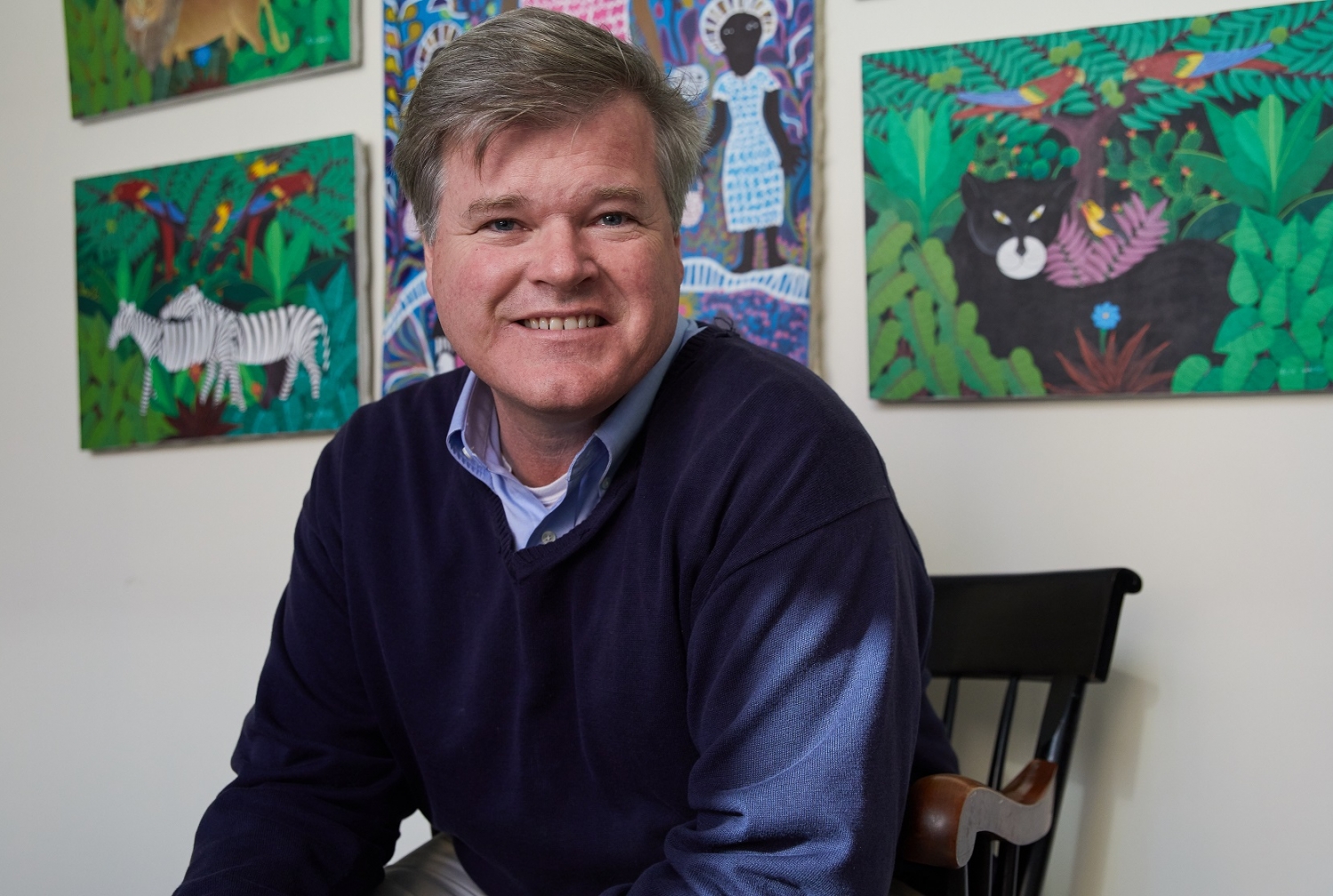 Dr. Daniel Fitzgerald, an international leader in infectious diseases, has been named director of the Center for Global Health at Weill Cornell Medicine.

Dr. Fitzgerald will build upon Weill Cornell Medicine’s legacy of global engagement, which is reflected in more than 20 global health programs spanning six continents. Under Dr. Fitzgerald’s leadership, the Center for Global Health will strengthen relationships with key international partners, expand translational research opportunities and train the next generation of physician-scientists who are committed to improving health around the world.

A National Institutes of Health-funded physician-scientist, Dr. Fitzgerald has spent his career investigating the development, prevention and treatment of HIV/AIDS and tuberculosis in developing nations such as Haiti, Tanzania and India.

“Dr. Fitzgerald is a true global leader, and I am thrilled for him as he takes on this new role,” said Dr. Augustine M.K. Choi, the Stephen and Suzanne Weiss Dean of Weill Cornell Medicine. “Our greatest medical challenges transcend national borders, and as doctors and scientists, we have a responsibility to make the world a better, healthier place. Dr. Fitzgerald is an exemplar of this work, making it his life’s mission to help communities in need. I am excited to see what more he can do as center director.”

Dr. Fitzgerald has worked closely with Dr. Warren Johnson, the founding director of the center since 2009, for nearly 20 years. Dr. Johnson will step down as director and focus on training and mentoring junior faculty and fellows.

“Dan is truly a remarkable person,” said Dr. Johnson, the B.H. Kean Professor of Tropical Medicine, a professor of medicine and of clinical healthcare policy and research at Weill Cornell Medicine. “He is  an outstanding international leader in global health who has an exceptional capacity and commitment to training young doctors and scientists in the United States, as well as fellows from the countries in which we’ve been working. I could not be prouder or happier to see him in the position of director.”

“Weill Cornell Medicine has a tremendous history of physicians and scientists teaching, conducting research and providing care in global health,” said Dr. Fitzgerald, a professor of medicine and of medicine in microbiology and immunology. “To follow in their footsteps is a tremendous honor.”

As director, Dr. Fitzgerald will continue to strengthen relationships with the institution’s key partners around the world, including the Weill Bugando School of Medicine in Tanzania; the Haitian Study Group on Opportunistic Infections and Kaposi's Sarcoma, or GHESKIO, in Haiti; the Federal University of Bahia’s School of Medicine and the Oswaldo Cruz Foundation/Brazilian Ministry of Health in Brazil; the BJ Medical College in Pune India; and Weill Cornell Medicine-Qatar.

Working with physicians, scientists and health advocates from local communities, Weill Cornell’s investigators have for decades conducted translational research, focusing on understanding, diagnosing and treating infectious diseases, such as HIV/AIDS, tuberculosis and other tropical diseases. Dr. Fitzgerald plans to extend this model to other areas of medicine including women’s and maternal-child health. “When we speak to people in Haiti and Tanzania, that’s an area in which they want more research, education and services offered,” he said.

Center faculty also plan to confront the growing incidence of cardiovascular disease, which is now the leading cause of mortality in Haiti, Tanzania, and many other developing countries. They will seek to understand the public health impact and underlying mechanisms of cardiovascular disease in resource-poor settings, determine risk factors and develop interventions to prevent occurrence.

“It harkens back to HIV/AIDS 20 years ago, when we first started treating people with effective therapy, implemented large-scale prevention programs and brought mortality down globally,” Dr. Fitzgerald said. “I think we can do the same with cardiovascular disease. By intervening early, we can prevent strokes and heart attacks. We can make a huge impact if we can intervene before someone gets to the hospital.”

These new areas of the center’s global health initiatives reflect the interests and priorities of Weill Cornell Medicine’s junior faculty members, whom Drs. Fitzgerald, Johnson and senior investigators are mentoring as the next generation of global health leaders. Research projects they are pursuing range from improving HIV care among adolescents in Haiti; studying hypertension and heart disease in Tanzania; examining immune changes and risk of infectious diseases in pregnant women in India, ; and developing a urine test to diagnose tuberculosis.

The center is also strongly committed to increasing the ranks of women engaged in global health research and to supporting initiatives designed to remove the barriers that women may face rising to global health leadership. One such initiative is the Women in Global Health Research Symposium, which was established in 2015 by Dr. Jennifer Downs, an assistant professor of medicine and of medicine in microbiology and immunology, and Dr. Jyoti Mathad, an assistant professor of medicine and of medicine in obstetrics and gynecology, to discuss challenges women encounter working internationally, and develop strategies to overcome them. Six other academic medical centers have replicated the symposium on their campuses.

“We really have a dream team of young faculty members here at Weill Cornell Medicine,” Dr. Fitzgerald said. “They are an all-star team, and we have an amazing opportunity to foster them and help them grow to their fullest potential. In science, we say that brilliant ideas always come from young people. I’m excited to see the innovations to improve healthcare in resource-poor countries that our talented young investigators are going to come up with.”

Dr. Fitzgerald received his bachelor’s degree from the University of Notre Dame and his medical degree from Yale School of Medicine. He completed an internal medicine residency at Massachusetts General Hospital and fellowships at Harvard University’s Program in Infectious Diseases before moving to New York City to serve as an infectious disease fellow at Weill Cornell Medicine. He joined Weill Cornell Medicine’s faculty as an assistant professor of medicine in 2002 and rose through the ranks, becoming co-director of the Center for Global Health in 2009 and a tenured professor in 2016.

Among his many translational research studies, Dr. Fitzgerald led a large trial testing the efficacy of early antiretroviral therapy (ART) in AIDS patients in Haiti—the first such examination in a developing country—finding that patient outcomes were comparable with those achieved in the United States and that early therapy prevents mortality. Data generated from Dr. Fitzgerald’s research prompted the World Health Organization to change international HIV treatment guidelines and helped ensure that ART was available to patients worldwide.

Dr. Fitzgerald is also investigating how and why the bacterium that causes tuberculosis persists in human hosts, using insights gleaned from his studies to develop new drugs that may treat the disease. He is currently exploring the potential of the anti-parasitic drug nitazoxanide as a treatment for patients with active pulmonary tuberculosis in Haiti.

Dr. Fitzgerald has been recognized with numerous awards, including the National Institutes of Health’s Fogarty International Research Scientist Award, the inaugural Weill Cornell Medicine’s Glimcher Award for Excellence in Mentoring Women Faculty and election to the American Society for Clinical Investigation.