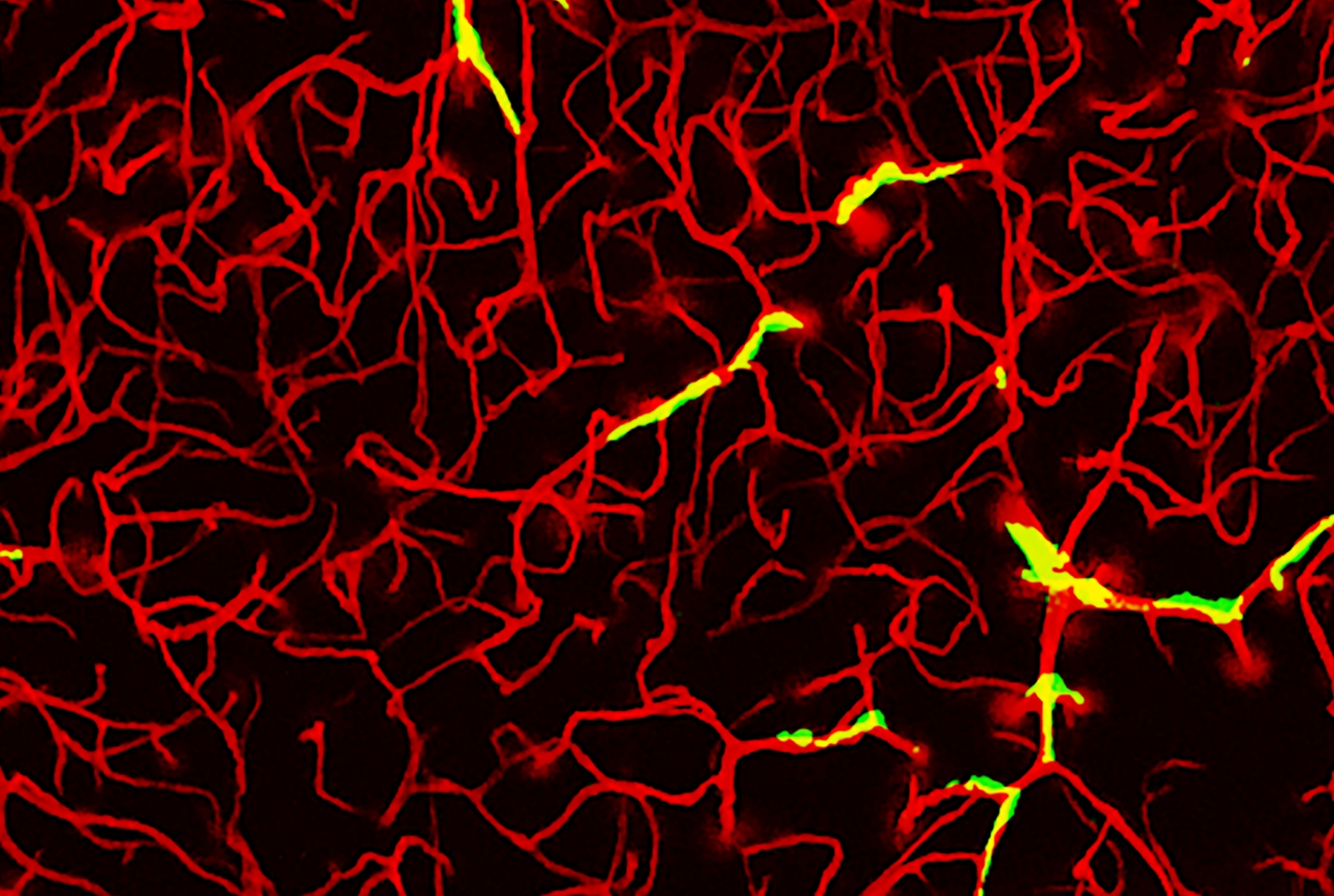 Immune cells called perivascular macrophages (green) are observed in close contact with blood vessels in the brain (red). When activated by plaque deposits from the peptide amyloid-beta, which are a hallmark of Alzheimer’s disease, perivascular macrophages produce damaging free radicals that paralyze blood vessels and deprive the brain of the needed supply of nutrients and oxygen.

By studying the effects of immune cells that surround blood vessels in the brain, Weill Cornell Medicine researchers have discovered a new pathway involving these cells that may contribute to the cause of Alzheimer’s disease.

One of the hallmarks of Alzheimer’s disease is the accumulation of plaque deposits, or abnormal protein fragments, from a peptide called amyloid-beta. Amyloid-beta destroys neurons and damages brain blood vessels with the help of highly reactive molecules, called free radicals, which are derived from oxygen. For their study, published May 17 in Circulation Research, the researchers sought to determine which cells in the brain were responsible for producing the free radicals, also known as reactive oxygen species (ROS).

“These free radicals are nasty molecules that paralyze the vessels so that they can’t function normally. As a result, brain cells are deprived of the blood supply of oxygen and glucose they need to function properly,” said senior study author Dr. Costantino Iadecola, director of the Feil Family Brain and Mind Research Institute and the Anne Parrish Titzell Professor of Neurology at Weill Cornell Medicine.

In their study, the investigators examined cells in the brain called perivascular macrophages (PVM), which surround blood vessels and pick up and remove damaging metabolic byproducts floating around the brain. The team focused on these cells because amyloid-beta tends to accumulate in the vascular space where PVM are located.

“We saw that when cells are exposed to amyloid beta, these PVM start producing free radicals like crazy,” Dr. Iadecola said.

To determine whether the PVM were involved in the ROS production, the researchers removed PVM by injecting into the brains of mice spherical lipid droplets called liposomes that contained the drug clodronate.

“The liposomes acted as a kind of Trojan horse,” said Dr. Laibaik Park, assistant professor of research in neuroscience in the Feil Family Brain and Mind Research Institute, and first author of the study. “The PVM digest the lipids and sets the drug loose into the cell, forcing them to die.”

The researchers then sought to learn what caused the PVM to produce ROS. Previous studies showed that macrophages have innate immune receptors on their surface called CD36 that help them bind and interact with other immune cells and proteins. The next step was to determine what happens when CD36 was not present, Dr. Iadecola said.

To remove the CD36 receptors from PVM, the researchers first used radiation to destroy the PVM. Then, old PVM were replaced through a bone marrow transplant with new PVM that did not have the receptor.

“When we did that, it was as good as getting rid of the whole macrophage, proving that the presence of CD36 on PVM was necessary for the ROS production and vascular damage to occur,” Dr. Iadecola said.

The researchers ultimately discovered that when amyloid beta binds to the CD36 receptor of PVM, a signaling pathway is triggered, which causes an enzyme called NADPH oxidase, to produce free radicals.

Genetic studies have long suggested that the brain’s innate immune cells, like microglia and macrophages, contribute to  Alzheimer’s disease, but how these cells damaged the brain was not known. “Our study identifies a novel way in which immune cells could contribute to Alzheimer’s disease, and provide a new therapeutic approach to suppress their damaging effects.” Dr. Iadecola said.

Researchers will now seek to develop methods that block CD36 or NADPH oxidase in the cells, which may reduce the amount of amyloid-beta in the brain and potentially slow down the progression of Alzheimer’s disease. “Delaying the process may give you more years with a healthy mind,” Dr. Iadecola said.

He also added that the maintenance of blood vessel health is crucial for a wide variety of brain diseases. “Our research shows that even in a disease that doesn’t start with a blood vessel, by making the vessels work better, there may be a beneficial effect,” Dr. Iadecola said. “Beside Alzheimer’s disease, our study provides us with a new way to look at vascular risk factors that cause stroke and dementia, like hypertension and diabetes, because in these conditions these PVM cells were not previously considered as major players.”