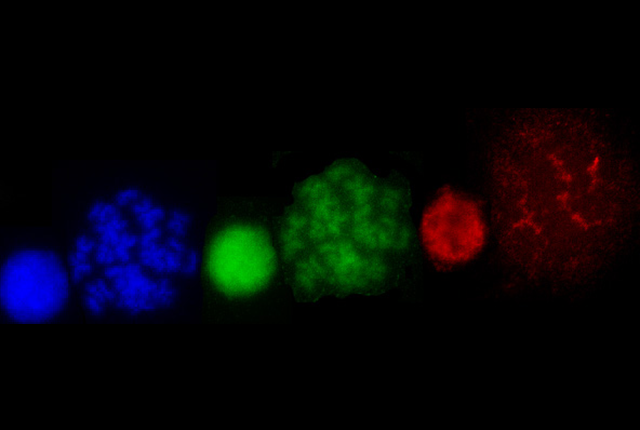 This image shows the removal of the protein RNA polymerase II (red) from chromosomes during cell division, resulting in a temporary pause in the gene expression program. However, protein SOX2 (in green) remains associated with chromosomes, ensuring that the daughter cells will faithfully resume the transcriptional program and inherit the same identity as the mother cell.

Stem cells preserve their identities after cell division by using a series of protein “bookmarks” on their genes, according to new research published by scientists at Weill Cornell Medicine. The results may further the understanding of how certain diseases like cancer develop and could have broad clinical implications for preventing disease.

Pluripotent stem cells (PSCs) are cells that have the ability to transform into any kind of cell in the body. What type of cell each stem cell becomes — called cell identity — is determined by a tightly-controlled system regulated by various proteins. As these cells divide by mitosis, each so-called daughter cell produced should be the same type as its cell of origin. But during mitosis the control system is briefly disrupted, creating a window in which a cell can “forget” its identity and transform into a different kind of cell.

“If a cell doesn’t remember what it’s supposed to be, it can transform into something else, even a malignant cell,” says Dr. Effie Apostolou, an assistant professor of molecular biology in medicine and member of the Sandra and Edward Meyer Cancer Center at Weill Cornell Medicine. “Understanding how this process is controlled is fundamental to understanding how many diseases arise.”

In a paper published May 16 in Cell Reports, Dr. Apostolou and her team found that cell identity is preserved in pluripotent stem cells through a series of small modifications in proteins — known as “bookmarks” — on the cell’s genes. These bookmarks do not change during mitosis. “So when the cell resumes its functions, such as transcription, after mitosis, this bookmark serves as a checkpoint to make sure that this process happens properly,” Dr. Apostolou said. In this way, PSCs ensure that daughter cells are the same as their mother cells.

The researchers identified some proteins that were possible candidates for bookmarks and then removed those proteins from cells during the critical window in mitosis. “If indeed this time window and the presence of these proteins are critical during mitosis, then the cell identity will be challenged,” Dr. Apostolou said.

They found that when these mitotic bookmarks were degraded in PSCs, the cells were unable to maintain their identities: they did not reliably divide into the same kind of cell generation after generation. “This tells us that these bookmarks are an important mechanism for keeping stem cells working properly,” Dr. Apostolou said.

Because pluripotent stem cells hold great promise for prevention and treatment of many diseases, this finding is key, she said. Understanding cell identity is fundamental to understanding disease, as many, including cancer and some neurological diseases, are the result of cell identity being lost.

“Mitosis can be either a crisis for cell identity or an opportunity for a new identity to arise” she said. “If we understand more about how cells maintain their identities during this process, we will better understand tumor formation and we may even be able to push stem cells into an identity that is therapeutically relevant for a given disease.”