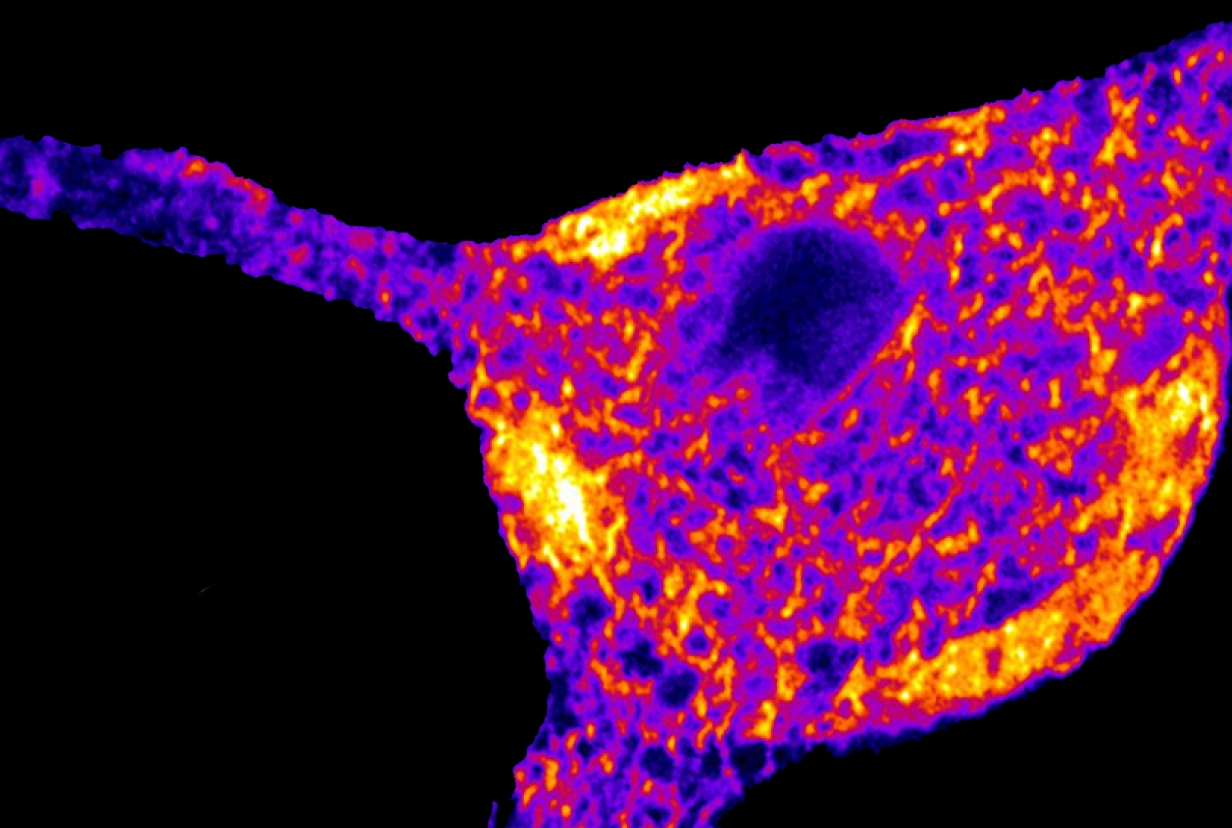 The endoplasmic reticulum inside a rat hippocampal neuron visualized with a new calcium indicator that reads out the concentration of calcium in his organelle. Image credit: Dr. Jaime de Juan Sanz.

A tiny tubular structure directly controls synapses, the junctions through which communication signals flow between nerve cells, according to a paper published Feb. 8 in Neuron. The research could eventually help scientists better understand and treat a variety of neurological diseases, including spastic paraplegia, which leads to stiffness, weakness and spasms in the legs, and amyotrophic lateral sclerosis (ALS), the fatal degenerative disorder also known as Lou Gehrig’s disease.

The new discovery linking the tubes, called smooth endoplasmic reticulum (ER), and synapses “changes the paradigm for us,” said Dr. Timothy Ryan, a professor of biochemistry at Weill Cornell Medicine, who led the study. “A better understanding of what directly controls synaptic function is compelling because every thought you have and every action your brain generates manifests through how well synapses work.”

Nerve cells, or neurons, are distinct from most types of cells in the body. In addition to the cell body that houses the nucleus that contains all the DNA and much of the machinery to turn DNA into proteins, neurons have two additional compartments that can extend over long distances in the brain. They receive input from other neurons through synapses onto dendrites and send out signals through sometimes very long (up to a meter in some cases) thread-like structures called axons that form synapses on other neurons. The smooth ER is located throughout the cell including the entire length o of the axon.

Scientists have known for about six decades that the rough ER is the place where proteins get secreted from and inserted into neuron membranes. The rough ER is a protein factory that surrounds the cell nucleus and connects to the smooth ER, whose “function was previously much less clear,” Dr. Ryan said.

In the 1980s, researchers discovered that smooth ER stores the mineral calcium and regulates it in the neuron’s cytoplasm, the fluid and material surrounding the nucleus. Calcium regulation is critical for normal synapse function. However, the smooth ER has been largely forgotten until now, possibly because the structure is incredibly small and difficult to see, even with electron microscopes, Dr. Ryan said.

Dr. Ryan and his colleagues theorized that the smooth ER is critical to brain function based on studies from the last decade, in which scientists identified gene mutations associated with axons not working properly, leading to movement disorders such as spastic paraplegia and ALS. These mutations in several instances were disrupting the function of proteins that reside in the smooth ER. This knowledge piqued Dr. Ryan’s interest in the relevance of the smooth ER and ER protein mutations in diseases in which the axons malfunction.

For this new paper, Dr. Ryan and a postdoctoral fellow in his lab, Dr. Jaime de Juan Sanz, collaborated with investigators at Janelia Research Campus at Howard Hughes Medical Institute in Ashburn, Va. The Janelia group specializes in engineering fluorescent proteins that bind to calcium, making the mineral easier to study and measure with optical microscopes. Dr. Ryan and his team used one of these fluorescent proteins to bind to calcium in the smooth ER so they could measure and study it.

“We got a big surprise,” Dr. Ryan said. Because the smooth ER both absorbs calcium from and releases it into the cytoplasm, the team had anticipated that the ER would simply control the cytoplasm’s calcium concentration.

“It’s as if we suddenly discovered there are wires that we didn’t know about in a machine,” he said. “And we asked what these wires were controlling. We had no idea that what they were doing is controlling absolutely basic functions of the synapse.”

“If our job is to write a repair manual and synapse dysfunction is at the heart of many neurological and neurodegenerative diseases,” he said, “having a better idea of what to include in the manual is critical.”