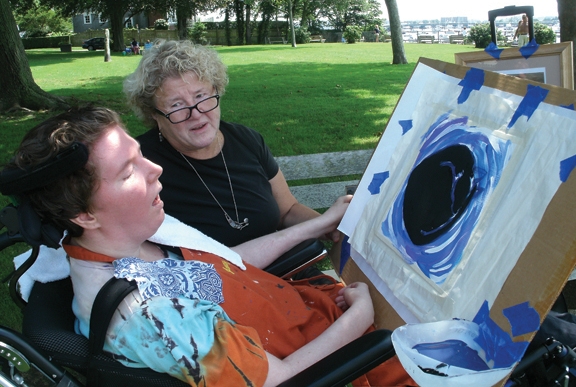 A severely brain injured woman, who recovered the ability to communicate using her left eye, restored connections and function of the areas of her brain responsible for producing expressive language and responding to human speech, according to new research from Weill Cornell Medicine scientists.

The study, published Dec. 7 in Science Translational Medicine, began 21 months after Margaret Worthen suffered massive strokes, and her continuing recovery was tracked for nearly three years. The research signifies the first time that scientists have captured the restoration of communication of a minimally conscious patient by measuring aspects of brain structure and function before and after communication resumed. It also raises the question of whether other patients in chronic care facilities who appear to be minimally responsive or unresponsive may harbor organized, higher-level brain function.

For the first 21 months after Ms. Worthen’s strokes, most doctors diagnosed her as being in a vegetative state, unable to speak and unaware of herself and her environment. Then, during her first visit with Dr. Schiff’s team, doctors detected an ability to respond to their command to look down with her left eye. Her ability was initially intermittent, but over the course of a year she developed a one-way communication system. She was able to respond to yes and no questions, such as “Is your name Margaret?” or “Is your father’s name Michael?” by moving her left eye down or up, but lacked a method to ask questions or use a brain-computer interface.

To measure the changes in Ms. Worthen’s brain as she improved this form of communication, the researchers used a number of imaging tools. The main technique, called diffusion tensor imaging, uses structural information about the brain obtained by magnetic resonance imaging (MRI) to make measurements that enable scientists to infer connection between specific areas.

Dr. Schiff and his colleagues found evidence for two critical processes – most prominently, reconnection of Broca’s area, the region of the brain located in the frontal lobe of the dominant hemisphere that is associated with language and speech. In addition, the two hemispheres of the patient’s brain had increased their connectivity. The findings suggest that reconnection began within the left hemisphere and extended to the right, corresponding to the restoration of Ms. Worthen’s ability to communicate.

The researchers also used functional MRI to measure blood flow changes in response to brain activity while Ms. Worthen listened to a human voice speaking. They found that the functional recovery of Broca’s area over time corresponded with the change in structural connectivity. In addition, language-responsive brain regions showed increasing correlation across both hemispheres over time.

The restoration of Ms. Worthen’s brain’s expressive language system followed her caregivers’ attempts to establish communication over the nearly three years of the study. Her recovered expressive language networks may also have triggered a restoration of Ms. Worthen’s inner speech or inner dialogue, which could have reinforced those same networks, according to the study authors, which include Dr. Henning Voss, associate professor of physics in radiology at Weill Cornell Medicine, and Dr. Esteban Fridman, assistant professor of neuroscience at the Feil Family Brain and Mind Research Institute at Weill Cornell Medicine.

The findings also raise important questions about how clinicians care for patients who are diagnosed as in vegetative or minimally conscious state, Dr. Schiff said. “We looked carefully at Margaret, made an observation that there was a way to try to connect with her, and the world changed for her,” he said. “Her life changed because now she wasn't being treated as if she may or may not be conscious. She was being treated as if she was there, and she was present.”

Dr. Schiff’s discovery that Ms. Worthen was able to communicate with her left eye “changed everything,” according to her mother, Nancy Smith Worthen. For example, it opened the door to speech therapy, which enabled caregivers to assess whether or not she was experiencing pain, and for Mrs. Worthen to determine her daughter’s wants or needs. Ms. Worthen was able to produce paintings with her mother’s hand guiding her, which Mrs. Worthen credits with further stimulating her brain.

Ms. Worthen, who died of complications from pneumonia last year, went on to develop enough facility with a computer interface that she was able to attend her five-year college reunion and hold conversations with classmates, assisted by a speech therapist. Her story is among those included in “Rights Come to Mind: Brain Injury, Ethics, and the Struggle for Consciousness,” by Dr. Joseph Fins, the E. William Davis Jr., MD, Professor of Medical Ethics and chief of the Division of Medical Ethics at Weill Cornell Medicine.

“When I would ask Margaret if she wanted to do this work with Dr. Schiff, she would always say yes,” Mrs. Worthen said. “To have her brain be studied was the way she could do something in the world with her disability. And now, even after she’s gone, she’s still contributing. I’m just so proud of her.”

Although the findings are from a single-subject study, scientists say they could apply to other patients based on the proposed mechanism and previous research findings. Ten years ago, team members reported similar changes of increased connections between the two cerebral hemispheres in Terry Wallis, a minimally conscious patient who spontaneously recovered speech 19 years after a traumatic brain injury. In addition, other studies have implicated injuries to the central thalamus such as those Ms. Worthen experienced in a general mechanism underlying impaired function in patients with disorders of consciousness.

This research was supported by the National Institutes of Health, the Charles A. Dana Foundation, the James S. McDonnell Foundation, the Jerold B. Katz Foundation and the Fred Plum Fellowship in Systems Neurology and Neurosciences.