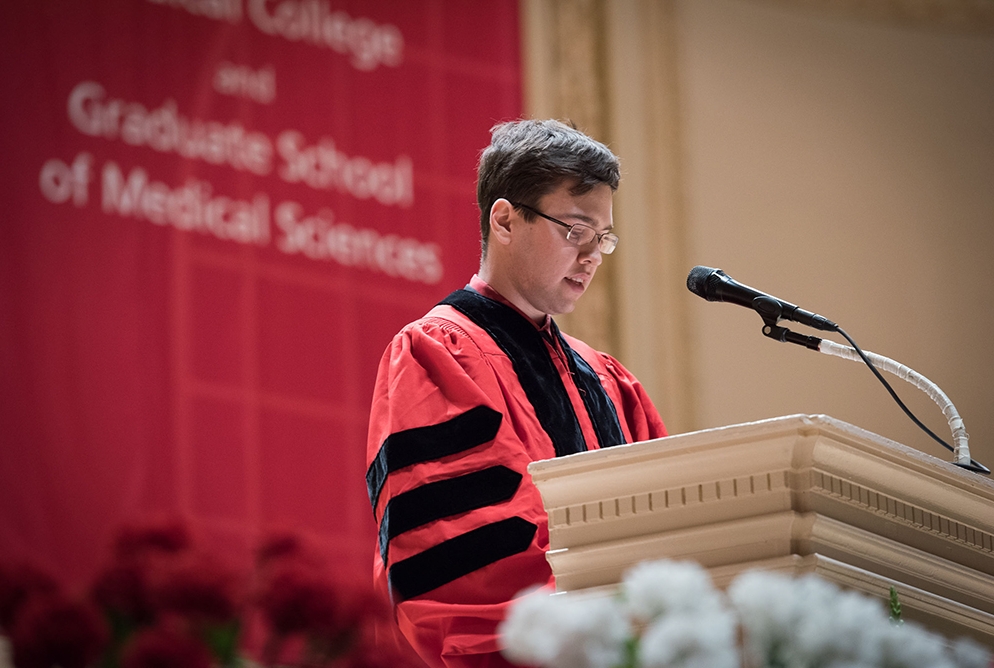 Dr. Igor Dikiy is just one small cog in the bigger machine that is the Weill Cornell Graduate School of Medical Sciences — or at least, that's how he sees it.

During his six years studying biochemistry in the graduate school, he was always more interested in looking at how smaller pieces added up to a big picture. Sometimes that meant shifting focus from a protein's specific involvement in Parkinson's disease to figuring out the normal role of the protein in the body, without disease. It also necessitates an unbelievable amount of patience, something Dr. Dikiy has mastered.

"I don't feel frustrated by only figuring out one small part. I feel that every bit of research uncovers something useful or is important to other researchers," said Dr. Dikiy, 27, who moved to the Inwood section of Manhattan from Russia when he was 7 years old. "It's a very biochemistry way of looking at things."

Dr. Dikiy's calm composure and passion for science culminated in his selection as the 2015 Distinguished Graduate Student Commencement Speaker. On May 28, he will urge his classmates to realize the broader impact of their work, no matter the size of their contribution to science and medicine.

He doesn't quite know what exactly sparked his interest in science, but he remembers who made him take notice. His high school chemistry teacher had a laissez-faire style of teaching, which allowed him to follow his interests and become immersed in the material. He took a particular interest in understanding chemical reactions.

Science was also a family affair for Dr. Dikiy. His father had always wanted to be a scientist, but now lives vicariously through his sons — Dr. Dikiy will graduate with a doctorate in biochemistry, and his younger brother is currently in the immunology program at the Weill Cornell Graduate School of Medical Sciences.

Biochemistry, as Dr. Dikiy describes it, is about taking a system or cell, breaking it down to its most basic components, figuring out each one, and then putting it back together. A Princeton University alum, Dr. Dikiy initially sought to attend graduate school for chemistry, but changed course after discovering that Weill Cornell had a biochemistry program. His interview at Weill Cornell sealed the deal, as did being closer to his family in New York.

Since arriving at Weill Cornell in 2009, he's taken that biochemistry approach in his doctorate work, which centered on a protein involved in Parkinson's disease, called alpha-synuclein, and how certain natural chemical modifications change how the protein interacts with other components of the cell.

His accomplishments in understanding how Parkinson's corrupts the brain over time provide important insights that could lead to a cure. But his work is just one piece of the puzzle. Spending five and a half years in the lab of his mentor Dr. David Eliezer taught Dr. Dikiy that building on the ideas and research of others is not only OK, but essential for the progression of science.

"A lot of what needs to happen for someone who is a scientist or a graduate student is to synthesize all the information that was obtained previously in a way that they can work with, and I think that's something Igor is very good at," said Dr. Eliezer, an associate professor of biochemistry and of neuroscience at the Department of Biochemistry and the Feil Family Brain and Mind Research Institute at Weill Cornell. "His own work is already highly cited and will potentially be very important in understanding, and even treating, Parkinson's."

When he first joined Dr. Eliezer's lab, Dr. Dikiy had very little experience. His initial plan had been to study organic chemistry and synthesize drugs, but he instead found that it wasn't at all what he expected — it was a factory-like environment where few discoveries were made, he said.

At a program retreat during his first year at Weill Cornell, a postdoc from the lab gave a talk about alpha-synuclein, a topic Dr. Dikiy felt more connected to as a student who was interested specifically in chemistry with proteins. The talk not only caught his attention, but later led him to a rotation with Dr. Eliezer. That experience would go on to mold the remainder of his graduate years.

"Everything I've learned about being a scientist, I've learned from David," Dr. Dikiy said. "We had a small lab, so I learned a lot about the techniques of — and how to approach — science. All of that biochemistry mindset? I got that all from David."

Having already successfully defended his thesis, Dr. Dikiy has moved on to bigger and better things, a privilege he accredits to his education from Weill Cornell. He's currently a postdoctoral researcher at the new City University of New York Advanced Science Research Center, where he studies how human and bacterial cells sense the environment around them.

With a goal of determining how to manipulate a basic biological system to help fight cancer and reduce the impact of infectious diseases, Dr. Dikiy looks forward to not only making a difference, but making the world a better place.

"I feel that, despite making relatively minor discoveries, I've contributed something others can build on in future research," Dr. Dikiy said. "Even if I never do research ever again, those findings and papers will live on, and will hopefully continue to help others make discoveries."