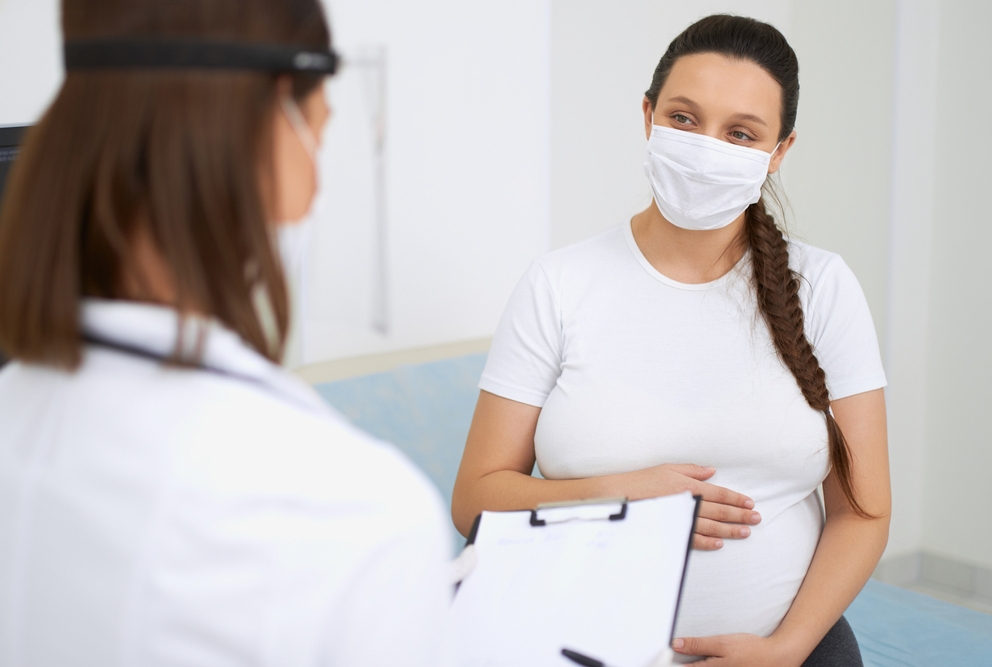 A pregnant individual at a doctors appointment. Credit: Shutterstock

Individuals who were already pregnant at the beginning of the COVID-19 pandemic had a 50 percent lower exposure to SARS-CoV-2 compared with those who became pregnant after the pandemic began and the general population, according to a new model created by Weill Cornell Medicine, NewYork-Presbyterian and University of Oxford investigators.

The findings, published Oct. 30 in the journal Viruses, are some of the most extensive data to support the common notion that protective shielding measures, including masking, social distancing and quarantining, conferred significant protection to pregnant individuals in the earliest months of the pandemic.

New York City was the epicenter of the COVID-19 pandemic in March 2020. Public health authorities and medical professionals recommended shielding measures for protection against SARS-CoV-2 infection, especially for vulnerable populations—recommendations that continue today. While the effects of COVID-19 on pregnant individuals were not well understood at that time, it is now known that they have a higher risk of severe disease, ICU admission with mechanical ventilation and death from COVID-19.

“While we can only infer that pregnant individuals were following public health recommendations and protecting themselves with shielding measures in the early months of the pandemic (since SARS-CoV-2 vaccines were not available yet), this is evidence that those protective measures against a largely unknown infectious disease threat were remarkably successful,” said co-author Dr. Nathaniel Hupert, an associate professor of population health sciences at Weill Cornell Medicine and an internist at NewYork-Presbyterian/Weill Cornell Medical Center.

All pregnant people admitted to NewYork-Presbyterian/Weill Cornell Medical Center to deliver babies in April 2020 received RT PCR testing, which analyzes nasal or oropharyngeal swab specimens to determine if an individual is infected with SARS-CoV-2. After initial studies showed that certain individuals were infected yet had no symptoms, Weill Cornell Medicine investigators realized RT PCR testing alone was underrepresenting the true number of individuals exposed to the virus. The addition of serology testing on the blood allowed for the detection of antibodies with the ability to bind to the virus’ spike protein, indicating previous infection.

“We felt it was essential to capture the full spectrum of patients exposed to the virus, so we can follow them long-term to understand the repercussions of infection during pregnancy,” said senior author Dr. Yawei Jenny Yang, an assistant professor of pathology and laboratory medicine at Weill Cornell Medicine and a pathologist at NewYork-Presbyterian/Weill Cornell Medical Center. “Our dataset was rare because we had data for a consistent and large patient population with both RT PCR and serology test results over a long period. This consistency enabled us to infer SARS-CoV-2 exposure in a vulnerable patient population.”

Dr. Hupert, who in March 2020 established The COVID-19 International Modelling Consortium with infectious disease modeling collaborators at the University of Oxford and other international institutions, recalls being struck by the immense value of Dr. Yang’s dataset. “Bringing together that unique, carefully curated, longitudinal data with the modeling expertise at the University of Oxford was very fortunate,” he said.

For their analysis, the researchers estimated exposure rate measures for 2,196 pregnant individuals who gave birth at NewYork-Presbyterian/Weill Cornell Medical Center from April 2020 through December 2020 and compared them with data for the general New York City population. The investigators determined exposure to SARS-CoV-2 by pregnant individuals was 50 percent lower than in the general population at the beginning of the pandemic, but rose to equal the level of the general population over the subsequent nine months.

“That increase in exposure makes sense, with the data reflecting an increasing number of individuals who had been exposed to SARS-CoV-2 before they became pregnant,” Dr. Hupert explained.

“Our research demonstrates the value of creating models to learn how changes in behavior patterns affected exposure to SARS-CoV-2 in a large population of vulnerable individuals,” Dr. Yang said. “Many thanks to our collaborators within Weill Cornell Medicine, Cornell University, NewYork-Presbyterian/Weill Cornell Medical Center and the University of Oxford.”