Enzyme That Protects Against Viruses Could Fuel Cancer Evolution 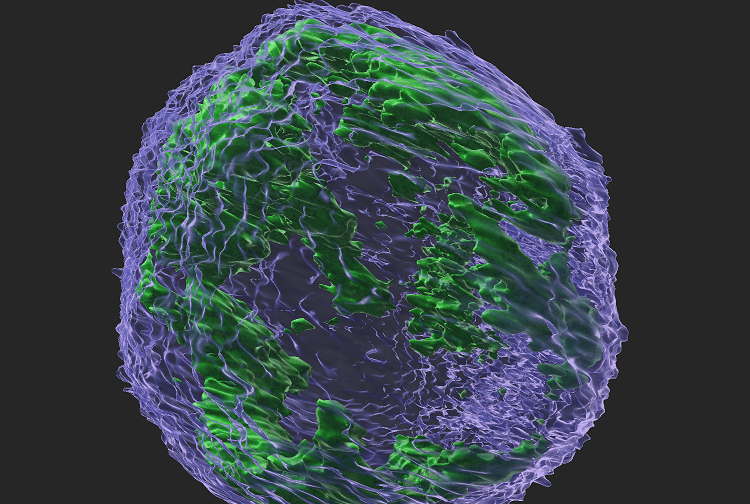 A three-dimensional image of a cancer cell's nucleus obtained by Dr. Faltas and his team shows the APOBEC3G protein (green) inside the nucleus (blue).

An enzyme that defends human cells against viruses can help drive cancer evolution towards greater malignancy by causing myriad mutations in cancer cells, according to a study led by investigators at Weill Cornell Medicine. The finding suggests that the enzyme may be a potential target for future cancer treatments.

In the new study, published Dec. 8 in Cancer Research, scientists used a preclinical model of bladder cancer to investigate the role of the enzyme called APOBEC3G in promoting the disease and found that it significantly increased the number of mutations in tumor cells, boosting the genetic diversity of bladder tumors and hastening mortality.

“Our findings suggest that APOBEC3G is a big contributor to bladder cancer evolution and should be considered as a target for future treatment strategies,” said study senior author Dr. Bishoy M. Faltas, assistant professor of medicine in the Division of Hematology and Medical Oncology and of cell and developmental biology at Weill Cornell Medicine, and an oncologist who specializes in urothelial cancers at NewYork-Presbyterian/Weill Cornell Medical Center. 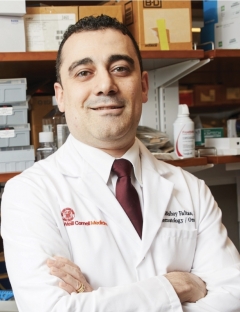 The APOBEC3 family of enzymes is capable of mutating RNA or DNA—by chemically modifying a cytosine nucleotide (letter “C” in the genetic code). This can result in an erroneous nucleotide at that position. The normal roles of these enzymes, including APOBEC3G, are to fight retroviruses like HIV—they attempt to hobble viral replication by mutating the cytosines in the viral genome.

The inherent hazardousness of these enzymes suggests that mechanisms must be in place to prevent them from harming cellular DNA. However, starting about a decade ago, researchers using new DNA-sequencing techniques began to find extensive APOBEC3-type mutations in cellular DNA in the context of cancer. In a 2016 study of human bladder tumor samples, Dr. Faltas, who is also director of bladder cancer research at the Englander Institute for Precision Medicine and a member of the Sandra and Edward Meyer Cancer Center, found that a high proportion of the mutations in these tumors were APOBEC3-related—and that these mutations appeared to have a role in helping tumors evade the effects of chemotherapy.

Such findings point to the possibility that cancers generally harness APOBEC3s to mutate their genomes. This could help them not only acquire all the mutations needed for cancerous growth but also boost their ability to diversify and “evolve” thereafter—enabling further growth and spread despite immune defenses, drug treatments, and other adverse factors.

In the new study, Dr. Faltas and his team, including first author Dr. Weisi Liu, a postdoctoral research associate, addressed the specific role of APOBEC3G in bladder cancer with direct cause-and-effect experiments. 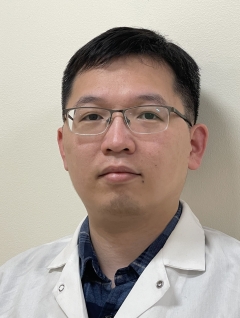 APOBEC3G is a human enzyme not found in mice, so the team knocked out the gene for the sole APOBEC3-type enzyme in mice, replacing it with the gene for human APOBEC3G. The researchers observed that when these APOBEC3G mice were exposed to a bladder cancer-promoting chemical that mimics the carcinogens in cigarette smoke, they became much more likely to develop this form of cancer (76% developed cancer) compared with mice whose APOBEC gene was knocked out and not replaced (53% developed cancer). Moreover, during a 30-week observation period, all the knockout-only mice survived, whereas nearly a third of the APOBEC3G mice succumbed to cancer.

To their surprise, the researchers found that APOBEC3G in the mouse cells was present in the nucleus, where cellular DNA is kept using an ‘optical sectioning’ microscopy technique. Previously, this protein had been thought to reside only outside the nucleus. They also found that the bladder tumors of the APOBEC3G mice had about twice the number of mutations compared to the tumors in knockout-only mice.

Identifying the specific mutational signature of APOBEC3G and mapping it in the tumor genomes, the team found ample evidence that the enzyme had caused a greater mutational burden and genomic diversity in the tumors, likely accounting for the greater malignancy and mortality in the APOBEC3G mice. “We saw a distinct mutational signature caused by APOBEC3G in these tumors that is different from signatures caused by other members of the APOBEC3 family” said Dr. Liu.

Lastly, the researchers looked for APOBEC3G’s mutational signature in a widely used human tumor DNA database, The Cancer Genome Atlas, and found that these mutations appear to be common in bladder cancers and are linked to worse outcomes.

Many Weill Cornell Medicine physicians and scientists maintain relationships and collaborate with external organizations to foster scientific innovation and provide expert guidance. The institution makes these disclosures public to ensure transparency. For this information, see profile for Dr. Faltas.