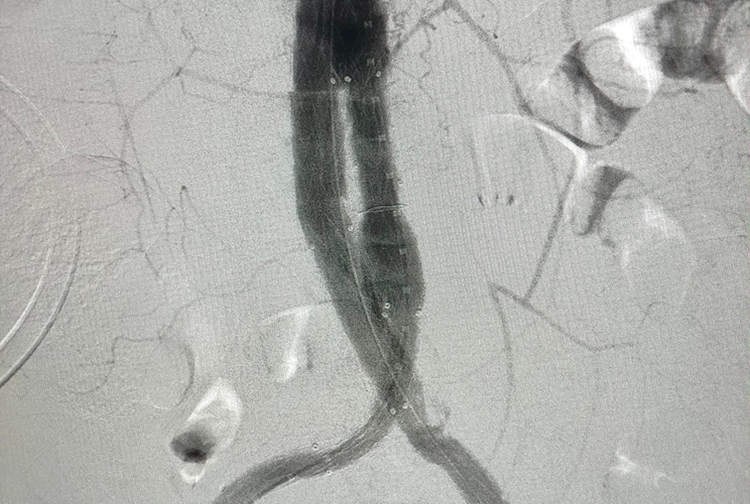 By linking a national vascular registry with medical data records in Medicare claims for patients who underwent endovascular abdominal aortic aneurysm repair, a team of researchers from across the country was able to identify which devices posed the most risk for reintervention.

The study, published Oct. 25 in BMJ, is the first to use linked registry claims data for long-term device-specific surveillance after surgery for abdominal aortic aneurysm, or a swelling of the body’s main blood vessel known as the aorta. Endovascular devices reinforce the artery from within and must last for several years to be effective.

The U.S. Food and Drug Administration is concerned about the durability of one device, called the Endologix AFX device. After reports of its fabric having poor durability, Endologix in 2014 changed the fabric in all of its AFX devices. But it was unknown whether or not this change impacted reintervention rates, or the rate of patients needing additional procedures related to aneurysms. There was also scant information about the real-world performance of similar devices from other manufacturers.

Researchers, including those from Weill Cornell Medicine, evaluated the long-term durability of four major devices used for endovascular abdominal aortic aneurysm repair: the Gore Excluder device, the Medtronic Endurant device, the Cook Zenith device, and the Endologix AFX device. Data for the Endologix AFC device was divided into two categories so researchers could separately analyze and compare the device’s early and later device generations. They found reintervention rates were significantly higher for patients who received the early AFX device as compared to other devices.

The Weill Cornell Institute for Health Technologies and Interventional Care conducted the data linkages and provided methodological supervision for this study. “The fact that we were able to study the outcomes of the later generation device is very unique and was eye-opening,” said Dr. Art Sedrakyan, a professor of population health sciences at Weill Cornell Medicine. “We expected to find the Endologix AFX device to be harmful overall given the reports to FDA. However, the size and breadth of our linked registry claims datasets helped us identify this signal more than two years earlier, leveraging the power of linked real-world datasets."

To study the four devices, researchers created an advanced coordinated registry out of VQI-VISION Medicare-claims linkage data, which used Medicare claims from 2003 to 2018 and the Society for Vascular Surgery’s quality improvement registry, the Vascular Quality Initiative, or VQI. The database collects individual-level demographic and clinical details for patients receiving common vascular procedures at more than 600 centers in the United States and Canada. These analyses connected more than 20,000 patients in the VQI with their respective Medicare claims files, and more patients are added every year.

“We wanted to help patients receive a device for their AAA that would last— and use the best data available to make that determination in real-world practice,” said Dr. Phil Goodney, who led the study in partnership with Dr. Sedrakyan’s team. Dr. Goodney is professor of surgery at the Geisel School of Medicine at Dartmouth and a vascular surgeon at Dartmouth Health’s Heart and Vascular Center located at Dartmouth Hitchcock Medical Center. “We were able to follow patients for many years, no matter where they received care. This methodology, called VQI-VISION, showed that certain devices performed better than others, and these results were available sooner for regulatory oversight.”

The study’s linked data identified the risk of reintervention as early as in mid-2015, which was over three years before the FDA issued its first regulatory warnings about the device.

“This study shows that real-world data sources, such as registry data linked to billing claims, is scientifically most robust and a powerful tool to ensure patients receive cardiovascular devices that are safe and durable in the long term,” Dr. Sedrakyan said. “We hope the FDA ensures that this type of evidence is key part of their cardiovascular device surveillance strategies in the future.”

“Through this study, we are highlighting for regulators, for the public and for clinicians that linking registries with Medicare data is a pragmatic way to initiate medical device surveillance in the country,” he added. “Investments in this methodology will help us sustain our low-cost infrastructure and conduct surveillance studies for most high-risk devices in the country.”