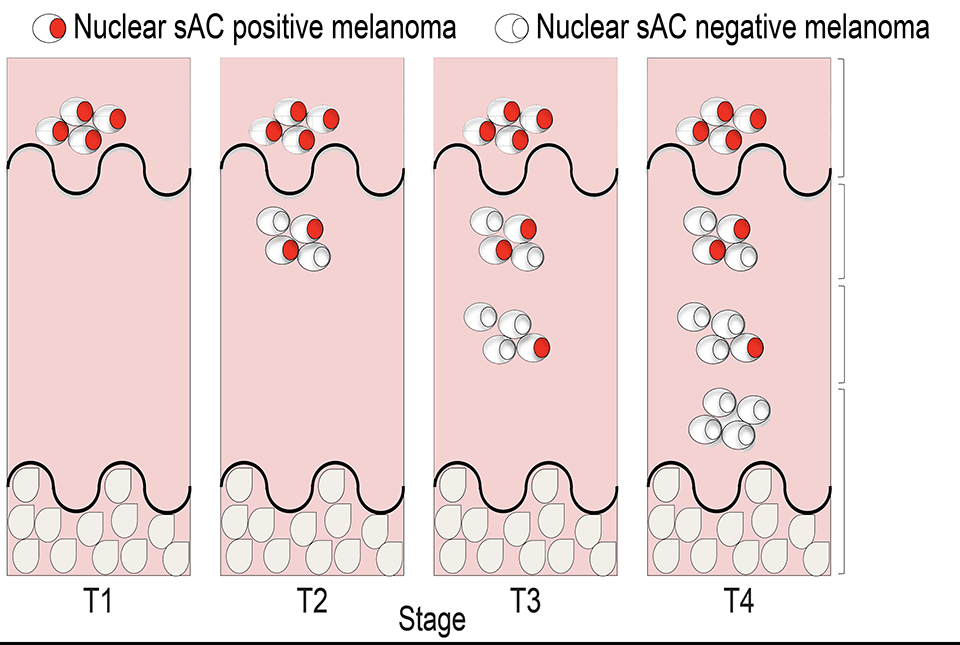 An enzyme (sAC) that produces cAMP moves in and out of the nucleus of melanoma cells and is missing from invasive cancer cells. When inside the nucleus, this enzyme prevents melanoma growth. The diagram illustrates loss of nuclear sAC as the melanoma cells penetrate deeper into the skin. Illustration courtesy of the Zippin lab.

By analyzing key enzymes in a new way, an international team led by researchers at Weill Cornell Medicine has discovered how a well-known signaling molecule can either stimulate or suppress tumor growth depending on where it’s produced. The work, published Sept. 27 in Cell Reports, reveals a new aspect of tumor cell biology, and points to a promising strategy for treating many types of cancer.

Cells use the small molecule cyclic AMP (cAMP) to trigger different effects largely depending on the proteins it activates. For example, past studies have shown that cAMP can either activate or suppress tumor growth under different circumstances. “Most people have studied cAMP by studying the effector proteins that [mediate its activity], or they've looked at the [enzymes that] inactivate it,” said co-senior author Dr. Jonathan H. Zippin, vice chair of research and an associate professor of dermatology and pharmacology at Weill Cornell Medicine, director of dermatology precision medicine at the Englander Institute for Precision Medicine, and a dermatologist at NewYork-Presbyterian/Weill Cornell Medical Center.

Dr. Taha Merghoub, deputy director of the Sandra and Edward Meyer Cancer Center, the Margaret and Herman Sokol Professor of Oncology Research and a professor of pharmacology, as well as Dr. Elena Piskounova, an assistant professor of cell biology in dermatology, are also co-senior authors on the study.

Instead of turning cAMP signaling on or off across the entire cell, as previous studies had done, Dr. Marek Drozdz, a postdoctoral associate in Dr. Zippin’s lab, wanted to activate cAMP in specific subcellular compartments. Two enzymes can produce cAMP in a cell: one bound to the plasma membrane and one that’s soluble.

“We focused on the soluble one, because this source of cAMP could be targeted to different compartments within the cell, and then evoke a little pocket of cAMP signaling in each compartment,” said Dr. Drozdz, who is the lead author on the paper. To do this, he created a novel tunable genetic system that allowed the team to activate cAMP in distinct subcellular compartments in both cells and mice.

The researchers discovered that producing cAMP in the cell nucleus uniquely suppresses tumor cell growth, by acting through a previously unknown mechanism that inactivates Hippo signaling.

“By taking this [sub-cellular] approach, we revealed a unique signaling pathway, which we think is going to have a lot of applications in a variety of different tissue systems and clinical contexts,” Dr. Zippin said.

While stimulating cAMP production in cell nuclei isn’t practical in patients, Dr. Zippin suggests that inhibiting specific phosphodiesterases to reduce cAMP breakdown in the nucleus could have the same effect. Various phosphodiesterase inhibitors have already been approved by the U.S. Food and Drug Administration to treat over a dozen conditions, ranging from heart failure to eczema.

Meanwhile, the team’s new techniques promise to illuminate more nuances of tumor cell biology. “We just redefined something that was considered well-established,” Dr. Drozdz said. “Having these tools and methods will hopefully allow for a better understanding of cAMP and its biology, not only in the context of cancer, but also in the context of general cell function.”

Many Weill Cornell Medicine physicians and scientists maintain relationships and collaborate with external organizations to foster scientific innovation and provide expert guidance. The institution makes these disclosures public to ensure transparency. For this information, see profile for Dr. Zippin.