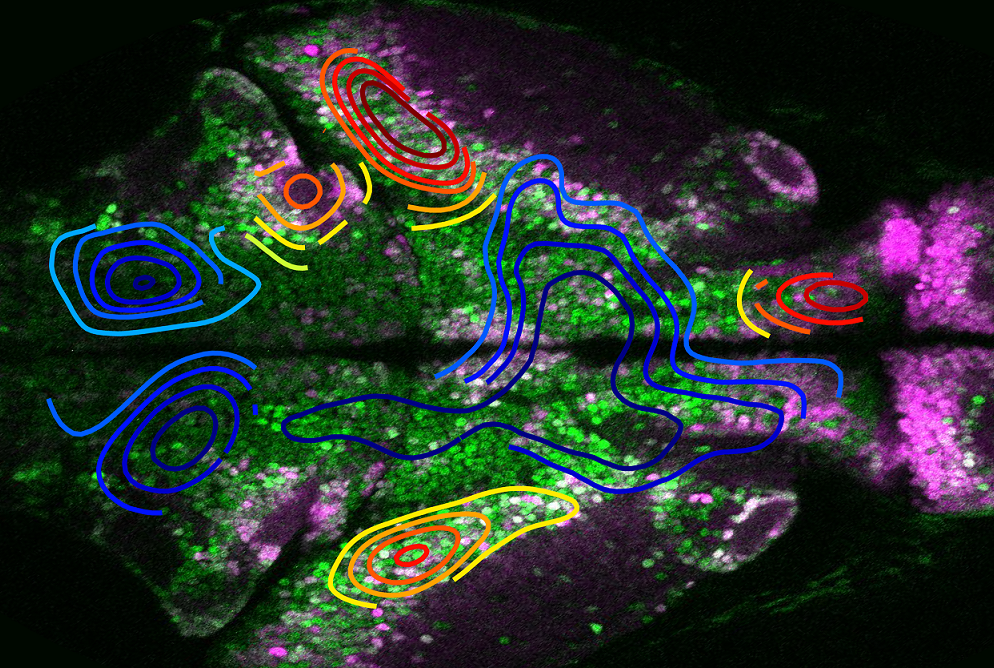 New evidence from a zebrafish model of epilepsy may help resolve a debate into how seizures originate, according to Weill Cornell Medicine and NewYork-Presbyterian investigators. The findings may also be useful in the discovery and development of future epilepsy drugs.

In the study, published Feb. 23 in Brain, the researchers were able to track the activities of neurons throughout the entire brains of larval zebrafish during seizures. They showed that the seizures originated from an excess of “excitatory” over “inhibitory” brain cell activity in relatively confined regions of the brain and spread only when they overcame strong inhibitory activity in surrounding regions.

“What’s really nice about the zebrafish model is that we can image every brain region, and in this model, for the first time, we were able to distinguish and track the activity of both excitatory and inhibitory neurons,” said first author Dr. James Niemeyer, a postdoctoral associate in neurological surgery at Weill Cornell Medicine. “So, this is a good starting point for examining the nuanced roles of these cell types during seizures.”

Epilepsy is common, afflicting roughly fifty million people around the world at any one time. But how it originates has never been entirely clear. On the one hand, there is evidence that seizures arise from zones in the brain that favor excitatory neuron activity over the usual restraining influence of inhibitory neurons. On the other hand, several recent studies have suggested that excessive activity in inhibitory neurons may trigger seizures – some researchers have observed earlier seizure activity in these cells. This has left a gap in understanding of the different roles of excitation and inhibition in seizures.

“The issue has been hard to resolve, due to the challenges involved in distinguishing and tracking excitatory and inhibitory neuron activity across multiple brain regions in an awake animal,” said Dr. Schwartz, who is also a professor of neurological surgery and of neuroscience at Weill Cornell Medicine.

With the zebrafish, the researchers were able to surmount those challenges. Using special fluorescent probes, electrical recordings and a technique called two-photon microscopy, they simultaneously distinguished and tracked excitatory and inhibitory neurons’ activity across the brain, before and during seizures induced by a standard chemical method.

They observed that seizures in this model tend to originate in the midbrain, at sites with a heavy imbalance of excitatory over inhibitory neuronal activity. Surrounding zones were much more weighted towards inhibitory activity, and evidently for this reason were able to resist, at least briefly, the spread of seizure activity from the initiating zone.

Prior studies that pointed to inhibitory neurons as seizure triggers may in some cases have detected only these highly inhibitory propagation zones rather than the initiating zone, the researchers suggested.

“We did find overactive inhibitory neurons in the propagation zones, but the advantage of our approach is that we can image across all brain regions to determine where the seizure originates,” said Dr. Aksay, who is also associate professor of computational neuroscience in computational biomedicine in the HRH Prince Alwaleed Bin Talal Bin Abdulaziz Al-Saud Institute for Computational Biomedicine at Weill Cornell Medicine.

The team plan to use their zebrafish model for epilepsy drug screening and hope to confirm their findings in future experiments looking across multiple brain regions in a mouse model.

The research was funded in part by a Weill Cornell Medicine seed grant for multidisciplinary research involving clinical and basic science departments.

Many Weill Cornell Medicine physicians and scientists maintain relationships and collaborate with external organizations to foster scientific innovation and provide expert guidance. The institution makes these disclosures public to ensure transparency. For this information, see profile for Dr. Theodore Schwartz.