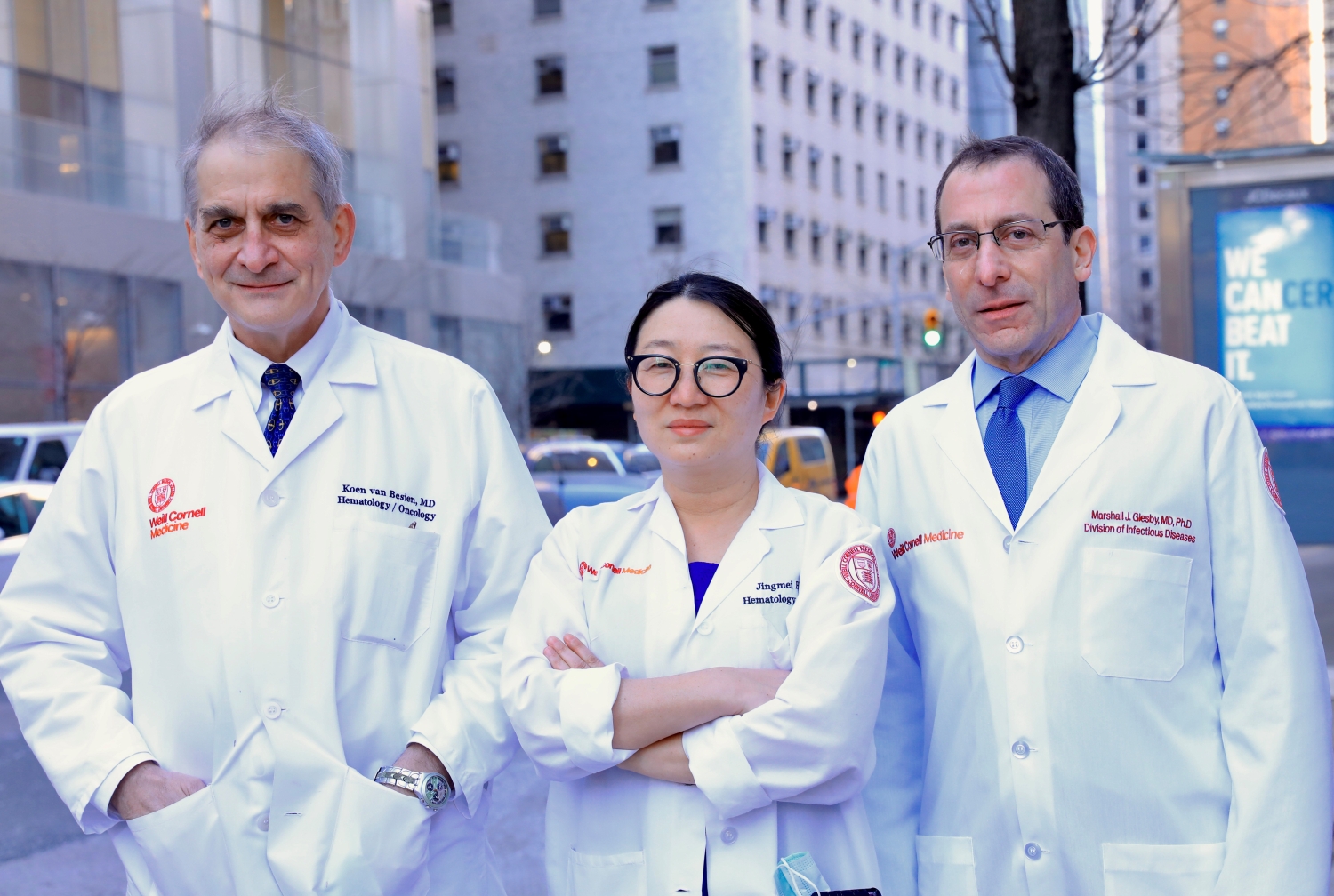 A patient living with HIV who received a blood stem cell transplant for high-risk acute myeloid leukemia has been free of the virus for 14 months after stopping HIV antiretroviral drug treatment, suggesting a cure, according to the Weill Cornell Medicine physician-scientists who performed the transplant and managed her care. As in two other successful cases that have been reported, the transplanted donor cells bore a mutation that makes them resistant to HIV infection.

The new case of long-term HIV remission was reported on Feb. 15 at the 29th annual Conference on Retroviruses and Opportunistic Infections, in Denver.

The patient received transplants of blood- and immune-cell replenishing stem cells after having her own blood cell population, including leukemic cells, destroyed by high-dose chemotherapy. The transplanted cells came from two sources: stem cells from a healthy adult relative were used to quickly restore her blood cell population to reduce infectious complications, and umbilical cord blood from an unrelated newborn child was used to provide long-term blood reconstitution.

Cord blood is used to supply blood stem cells for transplants for patients unable to find matched adult donors. Transplant specialists have found that cord blood may be used successfully even when they come from an unrelated donor whose immune markers only partially match the recipient’s.

Three months after the transplant, tests showed that the patient’s blood cell population was entirely derived from the HIV-resistant cord blood cells. Post-transplant studies could no longer detect HIV by various sensitive assays. The patient eventually stopped taking antiretroviral drugs to suppress her HIV infection, and so far, has been off the HIV drugs for 14 months, with no signs of HIV re-emergence after close follow-up during COVID 19 pandemic—indicating a likely cure, although physicians at this stage prefer to call it long-term remission. She has also been leukemia-free for more than four years.

Two prior cases of long-term remission in HIV-positive cancer patients after adult CCR5Δ32 stem cell transplantation have been reported. This case is the first to use cord blood cells, and the first to treat a woman and someone who identifies as mixed-race. Since the CCR5Δ32 variant is much more common in people of European heritage, it is harder to find well-matched CCR5Δ32 donors for traditional stem cell transplants into nonwhite patients, although the use of cord blood partly alleviates this problem.

The investigators concluded that cord blood containing the CCR5Δ32 variant offers a possible cure for both hematological malignancies and HIV and should be considered as a stem cell source when HIV-positive cancer patients need blood stem cell transplants. However, the procedure is considered too risky for HIV-positive patients who otherwise don’t need such transplants.