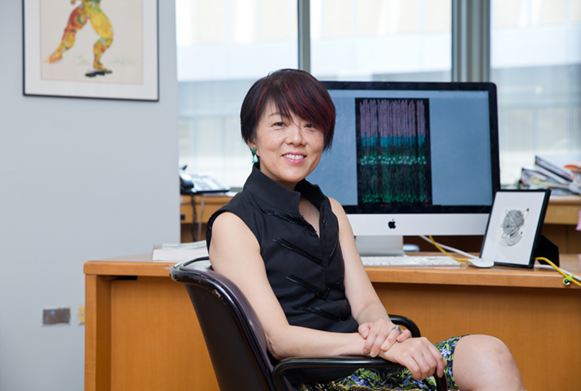 Researchers at Weill Cornell Medicine have developed a pre-clinical model of the leading cause of central vision loss in older individuals, called dry age-related macular degeneration (dry AMD), and used it to identify new treatment modalities and drug targets.

Previously created mouse models have not sufficiently mimicked the characteristics of dry AMD in humans. By contrast, the new model, described in a paper published Jan. 18 in Nature Communications, demonstrates the accumulation of fatty deposits under the retina called drusen, a hallmark of the disease.

“Creating a robust model of dry AMD has been a holy grail in the field,” said senior author Dr. Ching-Hwa Sung, the Betty Neuwirth Lee and Chilly Professor in Stem Cell Research and a professor of cell biology in ophthalmology and of cell and developmental biology at Weill Cornell Medicine. “We anticipate our model will be a valuable tool for understanding the early development and progression of the disease and designing potential therapies.”

AMD is the leading cause of blindness in adults over the age of 65, affecting an estimated 196 million people worldwide in 2020 and a projected total of 288 million by 2040. More than 80 percent of AMD cases are dry AMD, which involves  the lesions at the central part of the retina known as the macula and the formation of drusen. Symptoms of the condition include blurry, distorted or loss of central vision. Compromised central vision can make daily life activities extremely challenging. There are currently no treatments for dry AMD.

Dr. Sung and colleagues at Weill Cornell Medicine’s Margaret M. Dyson Vision Research Institute genetically engineered the mouse model by eliminating a gene called chloride intracellular channel 4 (CLIC4) from the retinal pigment endothelium (RPE) cells. Although CLIC4 had not been identified previously as a gene associated with a risk of AMD, the investigators found that removing CLIC4 triggered the changes of many genes associated with AMD, creating a chronic stress condition that led to the pathology mimicking the advanced form of dry AMD.

Using their model, the researchers discovered that the lipids forming drusen initially came from the retina-lining RPE cells, rather than from blood. The discovery, which represents a new treatment target for further development, may also explain why treating patients with statins that lower cholesterol levels in the blood has not been an effective approach for treating dry AMD.

The researchers are continuing their work, using the model to elucidate and advance understanding of dry AMD disease processes.

“We hope our model accelerates research in the field,” Dr. Sung said, “and that our validation of an exciting new platform for investigating AMD may lead to much-needed care options for patients.”