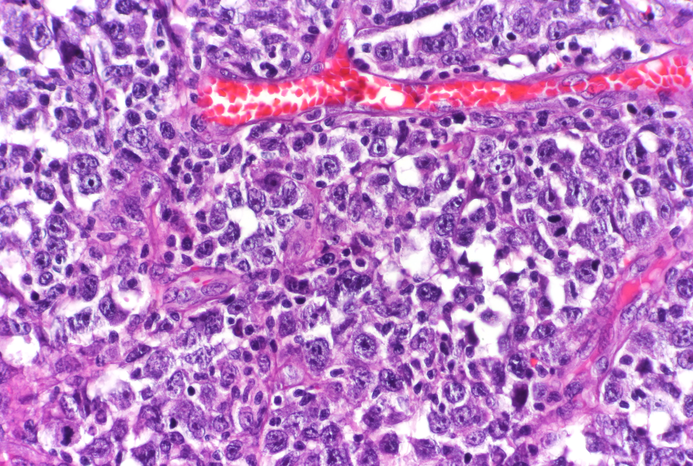 Aggressive and relatively common lymphomas called diffuse large B cell lymphomas (DLBCLs) have a critical metabolic vulnerability that can be exploited to trick these cancers into starving themselves, according to a study from researchers at Weill Cornell Medicine and Cornell’s Ithaca campus.

The researchers, whose study was published Dec. 13 in Blood Cancer Discovery, showed that a protein called ATF4, a genetic master-switch that controls the activities of hundreds of genes, has a key role in supporting the fast growth of DLBCLs. The scientists found that silencing ATF4 in DLBCL cells essentially fools the cells into starving themselves and slowing their growth—and that targeting ATF4 along with a closely related metabolic protein, SIRT3, even further enhances this cancer-killing effect.

“ATF4 represents a crucial and exploitable vulnerability in DLBCLs—and one that they appear to share regardless of the specific genetic mutations that trigger them,” said study co-senior author Dr. Ari Melnick, the Gebroe Family Professor of Hematology / Oncology in the Division of Hematology and Clinical Oncology and a member of the Sandra and Edward Meyer Cancer Center at Weill Cornell Medicine.

Dr. Hening Lin, a professor in the Department of Chemistry and Chemical Biology at Cornell University in Ithaca and a Howard Hughes Medical Institute investigator, is the other co-senior author of the study.

Lymphomas are blood cancers that usually originate from immune cells such as B cells, the producers of antibodies. The vast majority of lymphomas are so-called non-Hodgkin lymphomas, and DLBCLs account for about a third of these, or roughly 25,000 cases per year in the United States. DLBCLs are relatively fast-growing and aggressive, and despite many advances in lymphoma treatment in recent decades, about 40 percent of cases are not cured—a statistic that underscores the need for new treatment strategies.

Dr. Melnick, Dr. Lin and their colleagues set out in the study to investigate SIRT3, which resides in mitochondria, the tiny, oxygen-burning fuel reactors in our cells that are essential for powering cellular activities. The research team had discovered in a 2019 study that SIRT3 strongly supports the growth and survival of DLBCLs by speeding up the biochemical reactions that produce the molecular building blocks cells need to proliferate.

In the new study, the researchers explored further how SIRT3 promotes DLBCL growth, and found that one of the important ways it does this is by increasing the production of another metabolism-influencing protein, ATF4.

Their experiments revealed that SIRT3, as it turbo-boosts DLBCL metabolism, reduces the pools of amino acids that cells use to make proteins and otherwise fuel their growth. This reduction amounts to a starvation signal that activates the production of ATF4, which in turn ramps up the production and import of amino acids, further sustaining DLBCLs’ malignant proliferation.

Dr. Melnick and Dr. Lin in their 2019 study developed a selective SIRT3 inhibitor and showed that it kills DLBCL cells regardless of the cancer-driving mutations they carry. In the new study the researchers showed that SIRT3 inhibition results in accumulation of specific amino acids that are generated by the treated cells cannibalizing their own proteins. This situation essentially tricks DLBCL cells into behaving as if they had an adequate nutrient supplies and results in paradoxical suppression of ATF4 production, in turn leading to more severe starvation.

Further harnessing this effect for therapeutic benefit, the investigators experimented with a compound that blocks the activation of ATF4 and found that it has a similar broad impact on DLBCL cells. In addition, they found that combining the blockers of ATF4 and SIRT3 has a striking lymphoma cell-killing effect—much more potent than either blocker on its own. Combining ATF4 and SIRT3 inhibitors thus seems a promising strategy against DLBCLs.

“One of the really interesting things about this study is that it shows how nutrient conditions, in principle even from patients’ diets, can profoundly affect cancer-cell activity,” said study first author Dr. Meng Li, a member of the Melnick Laboratory who is also an instructor of cancer genomics in medicine at Weill Cornell Medicine.

The team is now conducting further experiments to find the best way to target the SIRT3-ATF4 axis to treat DLBCLs.

“My lab has been working on the sirtuin family of enzymes for more than 10 years, yet this study revealed some very interesting connections among SIRT3, metabolism and nutrient or stress sensing,” said Dr. Lin. “We are excited to consider the translational potential of this finding in treating lymphoma.”

Dr. Ari Melnick has consulted for Epizyme, Constellation and Jubilant. Dr. Melnick is an advisory board member for KDAC Pharma.