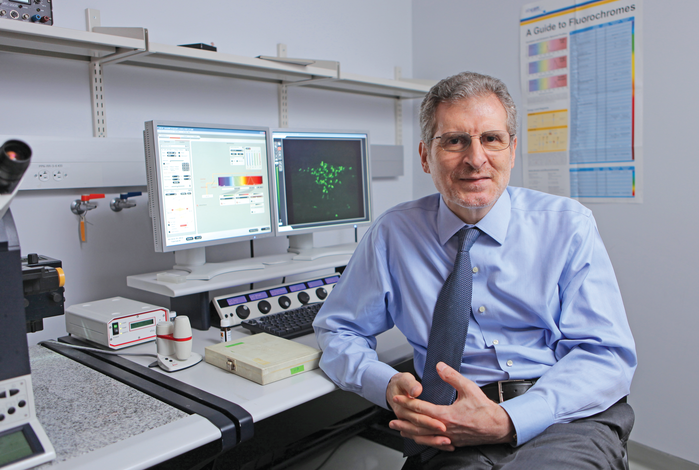 Dr. Costantino Iadecola, director and chair of the Feil Family Brain and Mind Research Institute and the Anne Parrish Titzell Professor of Neurology at Weill Cornell Medicine, has been awarded the 2021 Basic Research Prize from the American Heart Association (AHA).

The AHA Basic Research Prize is given annually to an individual in recognition of their outstanding contributions to the advancement of cardiovascular science. Dr. Iadecola, the first neurologist to win the prize since the AHA began awarding it in 1990, is recognized for his research focusing on how impaired mechanisms in blood vessels play essential roles in the development of stroke, cognitive impairment and dementia.

“I am honored to receive this award and grateful to the American Heart Association for recognizing the importance of investigating the overlap between vascular dysfunction and neurodegenerative diseases,” said Dr. Iadecola, who is also a professor of neuroscience. “I am grateful to my mentors at Weill Cornell Medicine who inspired me to train as a vascular biologist and a neurobiologist.”

Dr. Iadecola pioneered and validated the concept that neurons and cells in the brain’s blood vessels work together to maintain brain health—the neurovascular unit. This insight inspired new research on mechanisms regulating cerebral blood flow and how their failure contributes to brain diseases such as Alzheimer’s. He discovered that the impaired ability of brain blood vessels to clear excess amyloid-beta and tau proteins effectively could serve as an early marker for Alzheimer’s disease. Dr. Iadecola also identified a relationship between the brain’s immune system and the harmful effects of high blood pressure on regulating blood flow in the brain and cognitive function. With colleagues at Weill Cornell Medicine, he discovered that a high-salt diet could potentially cause dementia through the Alzheimer protein tau, providing a link between dietary habits and neurodegeneration, and that the gut microbiota can influence susceptibility to stroke.

Dr. Iadecola earned his medical degree from the University of Rome, Italy, and began his medical career at Weill Cornell Medicine as a post-doctoral fellow in neurobiology. After completing a neurology residency at NewYork-Presbyterian/Weill Cornell Medical Center, he joined the University of Minnesota Medical School as an assistant professor in neurology. He returned to New York City as a professor of neurology and neuroscience at Weill Cornell Medicine, where he has been for the past 20 years, most recently serving as the director and chair of the Feil Family Brain and Mind Research Institute since 2012.

Dr. Iadecola has been honored with the AHA’s Willis Lecture Award, Excellence Award in Hypertension Research and Distinguished Scientist Award. He also received the Zenith Fellow Award from the Alzheimer’s Association and twice the Javits Neuroscience Investigator Award from the National Institute of Neurological Disorders and Stroke.

Dr. Iadecola has co-authored almost 400 papers published in leading scientific journals and is one of the most highly cited researchers in the field of neuroscience and behavioral neurology, according to Clarivate Analytics. He is the principal investigator of five major grants funded by the National Institutes of Health investigating the mechanisms of hypertension, salt in the diet, Alzheimer’s disease, stroke, and the protein apolipoprotein E, which is associated with Alzheimer’s disease and cardiovascular diseases.