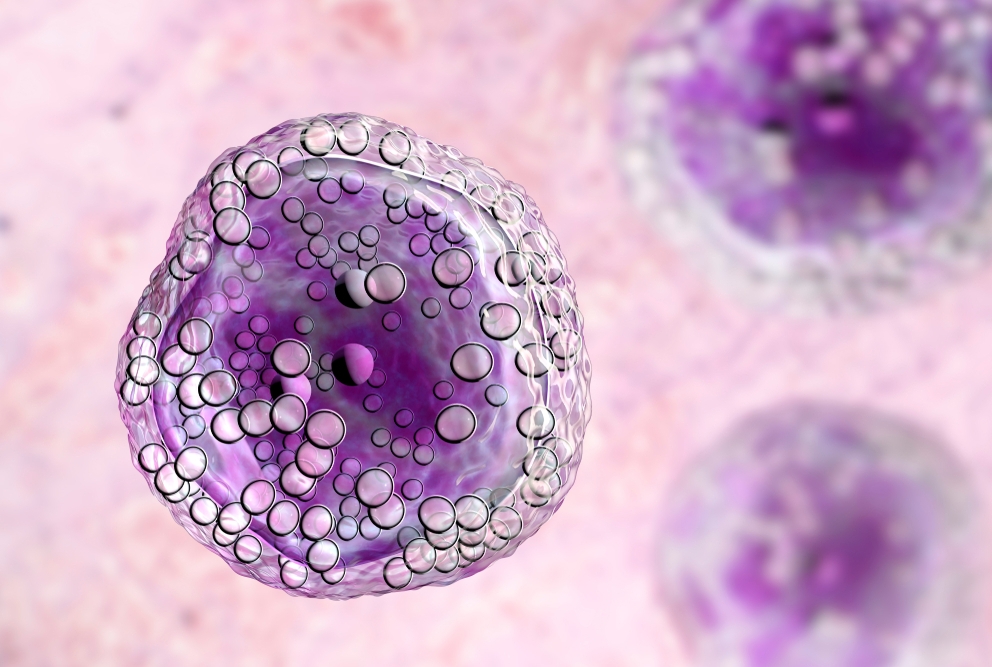 Lymphomas can turbo-charge their ability to proliferate by crowding growth-supporting enzymes into highly concentrated compartments within tumor cells, according to a study led by researchers at Weill Cornell Medicine.

The preclinical study, published Sept. 3 in Cancer Research, demonstrated that certain aggressive B-cell lymphomas use a protein-shepherding molecule called HSP90 to form and maintain these densely packed metabolic compartments, which are full of enzymes that synthesize amino acids and other cellular building blocks.

The researchers found that they could use an existing experimental drug that inhibits HSP90 to break up these metabolic compartments and slow lymphoma metabolism in lab-dish and animal studies.

“This strategy looks very promising as a way to treat aggressive lymphomas and also sensitize them to other therapies—we’re hoping to test it soon in lymphoma patients,” said senior author Dr. Leandro Cerchietti, associate professor of medicine in the Division of Hematology and Medical Oncology and a member of the Sandra and Edward Meyer Cancer Center at Weill Cornell Medicine.

Each year about 90,000 people in the United States are diagnosed with lymphomas, which mainly arise from B cells, the immune cells that make antibodies. In many B-cell lymphomas, cancerous proliferation is driven aggressively by the hyperactivity of a growth gene called MYC; these MYC-driven lymphomas are particularly hard to treat and tend to have relatively poor prognoses.

A remarkable feature of these aggressive lymphomas is the presence of abnormally large clusters of HSP90 and other so-called chaperone proteins. Chaperones normally help other proteins fold properly, and inhibit them from forming dysfunctional protein aggregates when their concentrations rise. The abnormally large clusters of chaperones, also known as “epichaperomes,” are not found in healthy cells, but show up frequently in MYC-driven lymphomas. Epichaperomes have been shown to promote lymphoma survival in part by helping to maintain a variety of protein complexes involved in signaling, transcription and translation within the crowded molecular environments of fast-growing tumor cells.

In the new study, Dr. Cerchietti and colleagues analyzed the roles of epichaperomes in MYC-driven lymphomas. They discovered that the epichaperomes, in addition to their previously described roles, also support highly concentrated “metabosomes”—tiny assembly lines of interacting metabolic enzymes. These enzyme complexes fuel the rapid growth of lymphoma cells by producing essential building-block molecules such as nucleotides, carbohydrates, and amino acids, and do so with unusual efficiency, the researchers found.

In these experiments, Dr. Cerchietti and his team were able to probe the functions of epichaperomes and the enzymes they organize by using an experimental drug compound, PU-H71 (Zelavespib) that inhibits HSP90. The compound, developed by the same Memorial Sloan Kettering Cancer Center researchers who described epichaperomes, seems to bind to HSP90 in a way that disrupts its ability to hold epichaperomes together. Dr. Cerchietti and his team showed that PU-H71 rapidly reduces metabolic activity in epichaperome-containing lymphoma cells.

The researchers observed, moreover, that among the molecules produced in lymphoma metabosomes is inosine, a DNA-related molecule that has an immune-suppressing effect. The researchers found evidence of high inosine—which dropped after a small dose of PU-H71—and immune suppression in blood samples from patients with aggressive lymphomas.

The overall results thus suggest that treating MYC-driven lymphomas with PU-H71 or similar epichaperome-disrupting drugs might inhibit the aggressive growth of these lymphomas and at the same time make them more susceptible to the patient’s immune system or to cancer immunotherapies.

Dr. Cerchietti noted that PU-H71 has been under development as a potential cancer treatment mainly with the understanding that, in disrupting HSP90-associated epichaperomes, it eventually brings about the destruction of cancer-driving proteins that need epichaperome protection. His new results suggest, however, that in comparison to this protein-destroying mechanism it can—merely by dispersing densely packed groupings of proteins—have an anticancer effect much more rapidly and at lower drug concentrations.

“We need to test this in patients to know for sure, but we may be able to deliver benefits with a relatively low dose of the drug, which could make it safer and also easier to use in combination with other lymphoma treatments,” Dr. Cerchietti said.