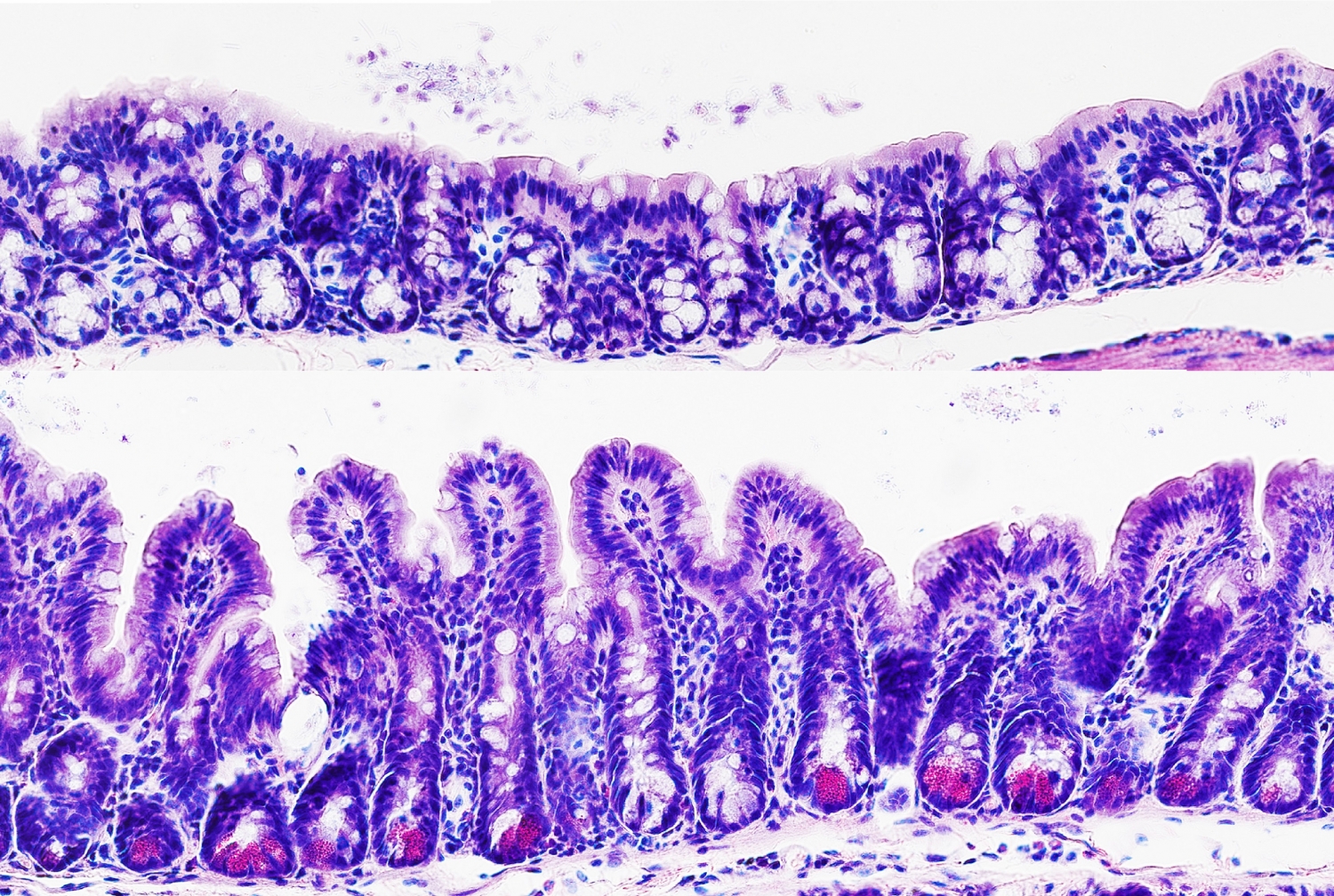 Histology of adult mouse colon mucosa before and after Satb2 loss. The flat mucosa of wild-type colon (top) is transformed into one resembling small intestine ileum with noticeable finger-like protrusions (villi) and Paneth cells at the bottom of the glands containing numerous pink granules (bottom). Image courtesy of Dr. Joe Zhou.

Loss of the gene SATB2 contributes to changes in stem cells that typically develop into the inner lining of the colon, or large intestine, transforming them into a cell type that normally lines a portion of the small intestine called the ileum, according to new preclinical research from Weill Cornell Medicine. Conversely, the presence of the SATB2 gene enables other intestinal cell types to develop and retain colon cell-like properties. The study could help researchers better understand the development of inflammatory bowel disease (IBD), a condition in which these types of transformations can occur, as well as a rare syndrome where the SATB2 gene is disrupted.

The study, published Sept. 27 in Cell Stem Cell, evaluated whether and how the presence or absence of SATB2 changed the inner lining, or mucosa, of the colon and ileum in mice and in human organoids—or mini-organs created in the laboratory from stem cells.

“While the role of this gene in the colon was previously unknown, we found that SATB2 has the ability to control the plasticity of colon stem cells through the regulation of hundreds of other genes,” said senior author Dr. Joe Zhou, who was recruited as a professor of regenerative medicine in medicine at Weill Cornell Medicine.

Dr. Zhou and his team investigate the biology of how adult stem cells maintain tissue’s regenerative ability in various parts of the body. When people sustain an injury to the body, stem cells can reproduce to become a wide range of different cells; for example, those in the brain, the skin or the gut. “You can reproduce exactly what you lost,” said Dr. Zhou.

Prior research in collaboration with Dr. Randy Longman, director of the Jill Roberts Center for Inflammatory Bowel Disease and an associate professor of medicine in the Division of Gastroenterology and Hepatology, and Dr. Ellen J. Scherl, the Jill Roberts Professor of Inflammatory Bowel Disease at Weill Cornell Medicine, has demonstrated that the ileum and colon differ in cell composition and function due to their respective and unique stem cells, said Dr. Zhou. These tissue-specific cells allow different regions to regenerate after damage, while maintaining their identity.

But this mechanism can also go awry. For example, after tissue damage caused by chronic inflammation, part of the colon mucosa can transform to resemble the mucosa of the ileum. This process, in which one tissue takes on the properties of another tissue, is known as metaplasia. “Metaplasia has consequences,” Dr. Zhou said. “It can be a precursor to the development of IBD or even colon cancer.” The more researchers understand how specific genes affect the colon and ileum stem cells, the more likely they are to advance potential treatments for conditions arising from metaplasia.

While the current study focused on SATB2 in the colon and ileum, the gene has traditionally been known for its expression in brain and in craniofacial tissue that makes up muscles and bone of face, Dr. Zhou said. A rare condition, SATB2-associated syndrome, results from a partial loss of the gene function. Patients with the condition have craniofacial abnormalities such as cleft palate and some behavioral and intellectual disabilities. They also have problems with their gastrointestinal system, which may interfere with weight gain. These gastrointestinal problems could potentially be explained by Dr. Zhou’s finding on SATB2 and its role in the colon.

“This is another area of research we’re planning on looking into,” he said, adding that knowing the role that SATB2 plays in the gastrointestinal system of people with this syndrome could help with the development of potential therapies to promote weight gain.