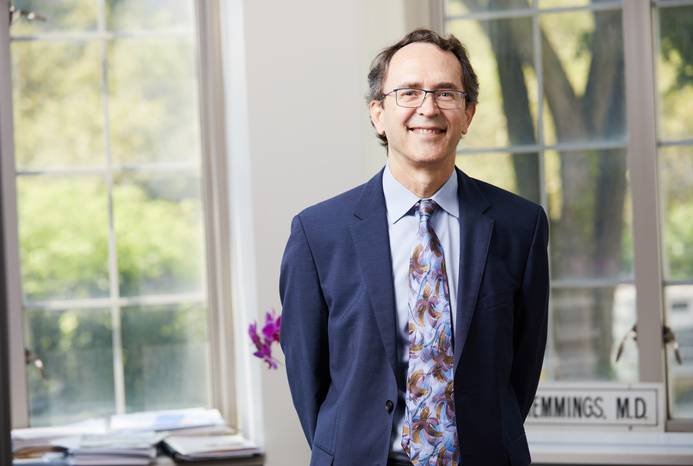 Dr. Hugh C. Hemmings, senior associate dean for research and chair of the Department of Anesthesiology at Weill Cornell Medicine, has been elected to the National Academy of Medicine, one of the highest recognitions in health and medicine.

The academy recognizes individuals who have made major contributions to the advancement of the medical sciences, health care and public health. Dr. Hemmings is among 100 new members who were elected in 2021 by current members.

“My colleagues in the academy are eminent physicians and scientists, and it is an incredible honor to be a part of that outstanding group,” said Dr. Hemmings, who is also anesthesiologist-in-chief at NewYork-Presbyterian/Weill Cornell Medical Center.

Dr. Hemmings, an expert in the pharmacology of general anesthesia, has helped pioneer the study of how anesthetics work at a molecular level. Specifically, he has investigated the mechanisms of neuronal signaling and the effects of general anesthetics on the transmission of signals across synapses—the chemical connections between neurons.

“At the time I started in anesthesia, it was clear anesthetics had synaptic effects, but the dogma was that these effects were primarily postsynaptic. Very few people considered the possibility of presynaptic effects,” he said.

One of Dr. Hemmings’ major contributions was to identify the role of voltage-gated ion channels, proteins in the cell membrane that play an important role in signaling, in mediating presynaptic effects of general anesthetics. He further discovered how the expression of different voltage-gated ion channels can determine which synapses are targeted.

“Anesthetics don’t affect every synapse to the same degree,” he said. “We are now trying to understand why some synapses are more sensitive and how that is related to the desirable anesthetic effects including unconsciousness and amnesia, immobility, and perhaps to some of the undesirable cognitive effects as well.” This knowledge could be used to optimize anesthetics to minimize side effects like neurocognitive complications and cardiovascular depression while retaining their desirable effects.

As an M.D.-Ph.D. student at Yale University studying neuropharmacology, Dr. Hemmings planned to enter a clinical area that aligned with his research. But he did not find psychiatry or neurology—the obvious choices at the time based on his thesis research—to be the right fit. Then, a fellow medical student suggested anesthesiology based on Dr. Hemmings’ interest in physiology and pharmacology.

After spending a month at the West Haven Veterans Administration Hospital doing an elective in anesthesia, Dr. Hemmings knew it was for him. “I instantly loved it. It was physiology and pharmacology in real time,” he said. “The residents loved what they were doing, and I absorbed their enthusiasm.”

After graduation, he returned to the Laboratory of Molecular and Cellular Neuroscience at The Rockefeller University for his postdoctoral fellowship with his graduate mentor, Dr. Paul Greengard. With Dr. Greengard, Dr. Hemmings studied the effects of the activation of dopamine receptors on cellular physiology, work that contributed to Dr. Greengard’s Nobel Prize for Physiology and Medicine in 2000.

After completing his anesthesia residency at Massachusetts General Hospital, Dr. Hemmings returned to Weill Cornell Medicine in 1991 as an assistant professor of anesthesiology and Cornell Scholar, where he benefited from the clinical mentorship of Dr. John Savarese, former chair of the Department of Anesthesiology. Dr. Hemmings directed Weill Cornell’s anesthesiology research program from 1995 and was named chair of the department in 2013 and senior associate dean of research in 2017.

He currently serves as editor-in-chief of the British Journal of Anaesthesia, is an elected fellow of the Royal College of Anaesthetists and a member of the Association of University Anesthesiologists. He has authored more than 175 articles in anesthesiology and neuroscience, and has co-edited four textbooks on anesthesiology, including Physiology and Pharmacology for Anesthesia, reflecting his early roots in the specialty.

“It’s not common for anesthesiologists to be elected to the National Academy of Medicine, so I never expected to receive such an honor,” Dr. Hemmings said. “I owe this recognition to the incredible mentorship and support I have received from my teachers, colleagues and collaborators since coming to Weill Cornell.”