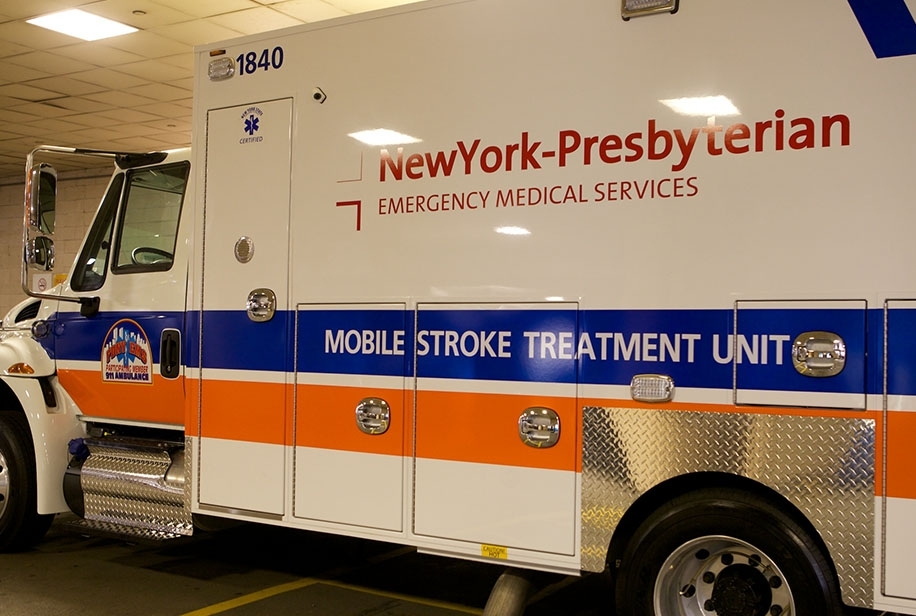 The study, published Sept. 9 in the New England Journal of Medicine, enrolled a total of 1,047 stroke patients who were eligible for clot-busting treatment, and found that those receiving MSU care were treated at a median interval of just 72 minutes after the onset of stroke symptoms, compared with 108 minutes in the EMS group. Prior research has shown that early clot-busting treatment is a critical factor in survival and overall recovery, and indeed the MSU-treated patients were significantly more likely than the EMS-treated patients (53 vs.43 percent) to have good outcomes at three months on a standard stroke recovery scale.

“This demonstrates the benefits of MSUs, which are really just doing one simple thing—getting clot-busting treatment to stroke patients more quickly so that they have a better chance of rapid and complete recovery,” said study co-author Dr. Matthew Fink, the Louis and Gertrude Feil Professor in Clinical Neurology, chairman of the Department of Neurology at Weill Cornell Medicine and neurologist-in-chief at NewYork-Presbyterian/Weill Cornell Medical Center.

Stroke is the fifth leading cause of death in the United States and a major contributor to long-term disability. The vast majority ofstrokes are ischemic strokes, in which a blood clot blocks blood flow in an artery serving the brain. Usually stroke-causing clots can be dissolved with protein-based drugs such as tissue plasminogen activator (t-PA).

“Stroke-causing clots typically are very soft and are very easily dissolved by t-PA treatment in the first hour or so after they form—what stroke physicians call the ‘golden hour,’” said Dr. Fink, who is also a paid editor for Relias Publications. “So there can be a huge difference in outcomes when treating in less than an hour compared with, say, 90 minutes; but you can almost never treat patients in under an hour when you have to wait for them to come into the emergency room.”

The need to treat stroke patients more quickly prompted UTHealth to set up the first MSU in the country in 2014. Other medical centers across the country, including NewYork-Presbyterian, in collaboration with Weill Cornell Medicine, Columbia University Irving Medical Center and the Fire Department of New York, soon followed. MSUs carry a stroke treatment team and mobile equipment for doing the necessary CT scan—to verify the existence of an ischemic stroke—and for administering t-PAwhen appropriate.

The new study, the first rigorous test of MSUs’ efficacy, was led by Dr. James Grotta, director of stroke research at the Clinical Institute for Research and Innovation at Memorial Hermann-Texas Medical Center, and director of the Houston Mobile Stroke Unit Consortium.

The researchers found that the median time from apparent stroke onset to 911-call was roughly 20 minutes in both the MSU and EMS groups. But the median time from 911-call to t-PA treatment was just 46 minutes in the MSU group, compared with 78 minutes in the EMS group, a reduction of 32 minutes. Nearly a third (32.9 percent) of the MSU patients received t-PA within an hour of stroke onset—compared with just 2.6 percent of EMS patients.

The quicker t-PA treatment in the MSU group translated into significantly better outcomes on average. On a measure of stroke disability called the modified Rankin Scale, 329 of 617 (53.3 percent) of MSU-treated patients scored a 0 or 1, indicating full or nearly full recovery, at 90 days—compared with just 185 of 430 (43.0 percent) EMS-treated patients.

“If you can treat a patient sooner and prevent them from being completely disabled by a stroke, you can reduce short-term costs to the healthcare system and avoid a tremendous expense for medical care in the future,” Dr. Fink said. “MSUs are the closest and fastest emergency rooms in these critical scenarios, helping to save lives, save money, and give patients in our communities a better chance at recovery.”

A version of this story first appeared on the UTHealth newsroom.