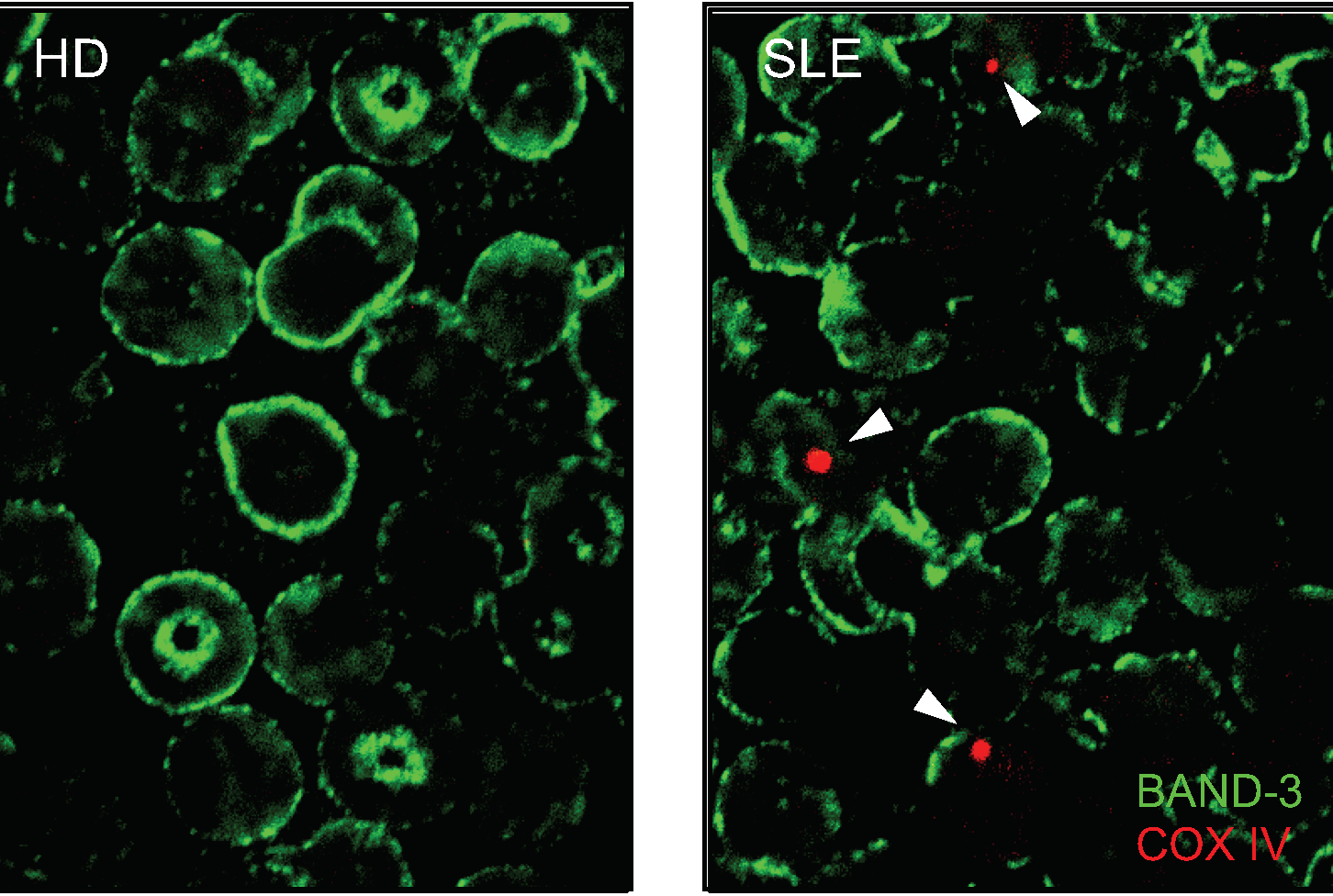 The autoimmune disease lupus may be triggered by a defective process in the development of red blood cells (RBCs), according to a study led by researchers at Weill Cornell Medicine. The discovery could lead to new methods for classifying and treating patients with this disease.

The researchers, who published their findings August 11 in Cell, found that in a number of lupus patients, maturing red blood cells fail to get rid of their mitochondria—tiny molecular reactors that help convert oxygen into chemical energy in most cell types, but are normally excluded from red blood cells. This abnormal retention of mitochondria can trigger the cascade of inappropriate and harmful immune activity that is characteristic of the disease.

“Our findings support that red blood cells can play a really important role in driving inflammation in a subgroup of lupus patients,” said senior author Dr. Virginia Pascual, the Drukier Director of the Gale and Ira Drukier Institute for Children’s Health and the Ronay Menschel Professor of Pediatrics at Weill Cornell Medicine. “So this adds a new piece to the lupus puzzle, and could now open the door to new possibilities for therapeutic interventions.”

The lead author of the study was Dr. Simone Caielli, assistant professor of immunology research at the Drukier Institute and the Department of Pediatrics at Weill Cornell Medicine.

Lupus, also known as systemic lupus erythematosus, is a chronic disorder that features intermittent and sometimes debilitating attacks by the immune system on the body’s own healthy tissues, including skin, joints, hair follicles, heart and kidneys. A common underlying factor is the abnormally elevated production of immune-activating proteins called type I interferons. Treatments, which often are taken long-term and have side effects, aim to suppress immune activity, including interferon-driven inflammation. There is no cure for lupus, and how it arises is still largely mysterious. It is estimated to affect roughly 200,000 people in the United States, the vast majority of whom are female.

Dr. Caielli then studied how human red blood cells normally rid themselves of mitochondria as they mature, as prior studies had mainly examined this in mice, and why this process could be defective in lupus patients.

Further experiments revealed how these abnormal red blood cells cause inflammation. In general, as red blood cells age or display signs of damage they are removed by scavenger immune cells called macrophages. Antibodies that bind red blood cells also facilitate their removal. Once ingested by macrophages, the red blood cells’ mitochondrial DNA stimulates a powerful inflammatory pathway called the cGAS/STING pathway, which in turn drives type I interferon production.  Underlining the relevance of these findings, “those lupus patients with mitochondria-containing red blood cells and evidence of circulating anti-RBC antibodies had higher interferon signatures compared to those who didn’t,” Dr. Caielli said.

The researchers are now continuing to study the complex process by which mitochondria are retained in red blood cells and end up driving abnormal immune activation. Identifying patients whose lupus symptoms are driven this way might permit to detect when they are likely to undergo lupus flares and to identify specific therapies for them.

This study was supported by National Institute of Arthritis and Musculoskeletal and Skin Diseases (NIAID) Center of Research Translation grant P50AR070594, NIAID NIH grant U19 AI082715, the Lupus Research Alliance and the Drukier Institute for Children’s Health at Weill Cornell Medicine.  Dr. Virginia Pascual has received consulting honoraria from Sanofi, Astra-Zeneca and Moderna and is the recipient of a research grant from Sanofi and a contract from Astra Zeneca.