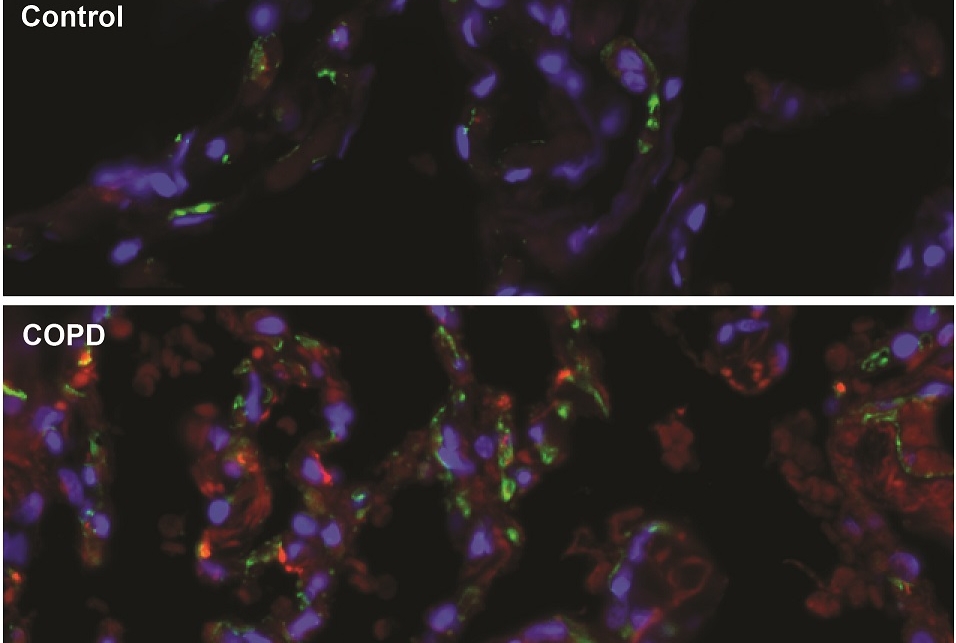 The specialized endothelial cells that line the blood vessels in the lung may hold the key to treating the common and often-fatal lung disease emphysema, according to a study from researchers at Weill Cornell Medicine and NewYork-Presbyterian.

In the study, published July 21 in the Journal of Experimental Medicine, the researchers showed that they could prevent or reverse most of the lung damage of emphysema in mice by injecting them with healthy lung endothelial cells from genetically identical mice. They achieved similar results by blocking LRG1, a signaling protein that is overproduced by emphysema-damaged lung endothelial cells in both humans and mice.

Emphysema, the most common form of the condition known as chronic obstructive pulmonary disease (COPD), is typically triggered by long-term cigarette smoking and is estimated to affect about 200 million people around the world. It features inflammatory processes and the progressive destruction of tiny air sacs called alveoli that perform the crucial exchange of oxygen for carbon dioxide in the lungs. Emphysema is hard to treat successfully, and often ends in respiratory failure and death. The new study offers hope that it may someday become much more treatable.

The researchers set out in the study to better understand the relationship between emphysema and lung endothelial cells, which line the inner surface of the lung’s network of blood vessels and are specialized to function in this role. Endothelial cells in general are known to have important roles in protecting and restoring the health of key organs.

“However, it is not clear whether endothelial dysfunction drives COPD pathophysiology or is simply the consequence of damaged alveolar surface area,” said co-senior author Dr. Augustine M.K. Choi, the Stephen and Suzanne Weiss Dean of Weill Cornell Medicine.

In initial experiments, the researchers examined lung tissue from human emphysema patients as well as from mice with an induced form of the disease. They found that changes in the activity of certain genes in lung endothelial cells, as well as the loss of those cells, closely tracked declines in lung function and other standard markers of emphysema progression. By contrast, they found that changes in epithelial cells, which line the outer surface of airways, tracked disease progression much less tightly.

The researchers then showed that by infusing mice with induced emphysema with tens of thousands of healthy lung endothelial cells from genetically identical mice, they could prevent and/or reverse most of the profound lung damage that was seen in untreated mice. By contrast, injecting other cell types, including endothelial cells from other tissues, was not effective.

The researchers reasoned that this treatment effect might have to do with differences in the molecules secreted by diseased versus healthy lung endothelial cells. In further investigations, they uncovered one such difference: Endothelial cells in the lungs of both humans and mice with emphysema showed sharp increases in production of the protein LRG1, a promoter of new blood vessel growth that has been linked to retinal and kidney diseases as well as some cancers. When the researchers deleted the gene for LRG1 from lung endothelial cells in mice, the animals’ lungs were largely protected from the lung damage of induced emphysema, much as they had been by the endothelial cell therapy.

“Taken together, our data strongly suggest the critical role of endothelial cell function in mediating the pathogenesis of COPD/emphysema,” said co-first author Dr. Alexandra Racanelli, an instructor of medicine in the Division of Pulmonary and Critical Care Medicine at Weill Cornell Medicine and a pulmonologist at NewYork-Presbyterian/Weill Cornell Medical Center. “Targeting endothelial cell biology by administering healthy lung endothelial cells and/or inhibiting the LRG1 pathway may therefore represent strategies of immense potential for the treatment of patients with advanced COPD or emphysema.”

Dr. Choi is a cofounder and equity stockholder for Proterris, which develops therapeutic uses for carbon monoxide. Dr. Choi also has a use patent on CO and a patent in COPD. Dr. Rafii is the founder of and a nonpaid consultant to Angiocrine Bioscience.